From a city newspaper:

Queens City Councilwoman Julissa Ferreras called for an investigation of her district office manager Monday after a blog linked the staffer to a Facebook page to raise money for a motorcyclist charged with attacking Manhattan father Alexian Lien.

The staffer, Ivettelis Rodriguez, is part of a motorcycle group that is trying to spring Robert Sims from jail, a Queens blog reported. “I am deeply disappointed with the behavior my staffer, Ivettelis Rodriguez, has exhibited,” Ferreras, a Democrat, told the Daily News through a spokeswoman, adding that she is “working with the City Council to launch a full investigation.”

Why is an investigation necessary? It's quite obvious that she did this on taxpayer time. But even if it wasn't, there was no mercy shown to a deputy press aide for Scott Stringer who had the audacity to criticize the president on Facebook, so why should Ms. Rodriguez be shown any for supporting biker thugs?

She must have a shitload of dirt on Ferreras! 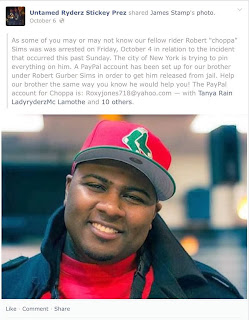 From another city paper:

“I am deeply disappointed with the behavior of my staffer, Ivettelis Rodriguez,” [Ferreras] said. “Her statements are not in any way indicative of my beliefs nor is it an accurate reflection of the high standards of personal conduct to which I hold my staff.”

But Rodriguez told The Post that someone copied a message onto her Facebook page through the “tag” function and that she doesn’t support Sims in any way.

“I just didn’t take it [the posting] down fast enough,” she said. “I don’t support him, I don’t even know him, I’ve never met him.”

Actually, the screenshot proves that your husband posted it to your misguided biker page, so don't blame "tagging".

I also find it quite hilarious that daily papers that plaster double entendre headlines and photos of half-naked women on their front covers on a semi-regular basis have problems crediting a blog called "Queens Crap" as their source. Or even just providing a link back to the original post in the web versions of their stories. You know things are bad when 2 of the big three are ripping off little old me. What the hell happened to journalism?
Posted by Queens Crapper at 12:39 AM

The problem starts from the top . Replace the captain of this sinking ship ! I cant live in this district any more . She cant run her office with the idots that were there today . There was a tall skinny man there today that smelled like pot . Cracking jokes wile the whole office is playing online games . And the office next door is no better . They sent us back over to there . " queens crap"

Kudos again to Queens Crap for exposing the SHIT that the media tends to stay away from.

You heard it here first, folks!

The news media has been dog shit for a long time. It's just that you usually don't call them out on it, you just link to their stories no matter how obviously distorted they may be because it fits your own agenda.

If girlfriend were white, she would have been fired already.

One by one I wish they would expose all these dirty political crapers . Rodriguez do a fundraiser for your un educated boss .

At least QC is Honest enough to post the Truth !! Fire her pathetic ass and call it a day ! Rodriguez hubby makes it clear that Sims is a friend and fellow biker but Wifey doesn't know him! Come on now.

The news media has been criticized since day one on this site, especially the weaklies. When you just change two words in a government press release and present it as news, you aren't watchdogs anymore, you're part of the problem.

Hand's down the craper has exposed one more peace of shit ....this is why queens is falling apart ! With fatcat political heads filling there pockets with kickbacks and cheap labor . Its a wonderful place to live here in queens crap !

The trash paper and TV news would never have covered this, I remember how it was. Good work crappy. The FBI should look at Julissa and her shady dealings. Investigate Julissa! Blow her deep cover.

I WISH 20000 BIKERS PROTEST IN FRONT OF THAT OFFICE IF THEY FIRE THE DUMMY . OVER A REPOST !!! FROM HER STUPID BRAIN LESS HUSBAND ... BOOT OUT THAT FAT CAT

Agreed 100% finally some ones notices the crap . This office should kick rocks . Time for a emergency election . Whos with me ? Mr drum should take over this district asap .

Why? because she was outted for her shit?

Because it's an embarrassing shame for decent people, who expect local government to reflect the better values of their constituency, not the basest values. If you don't understand this comment, get a dictionary.

I would like to think the presumpion of innocense is a community value.

So it's ok that she lied about that? And posted all her crap photos while she was at work?

Apparently anything is ok in some communities in Queens. Even attacking a family and busting a window next to a 2 year old!

I'm one of the admins of the "Justice For Alexian Lien" page of Facebook. You and your source did a great job breaking this story and deserve full credit. We were very happy and grateful to disseminate the story to our 20,000+ followers as well. Keep up the great work!

maybe if Crapper posted nude photographs of himself NY Post & Daily News would link to him!!

why are they calling them Bike Groups?
These are GANGS. she's a gangbanger.
FIRE HER ASS NOW.


the redsox hat is a gang giveaway.

there are a couple of Justice for Alexian Lien Pages on Facebook. which is yours?

Yeah that Red sox hat is definitely Bloods red. I'd be careful if I was him and what he's advertising!

wow. black ppl lying and getting caught in their lies. so shocked.