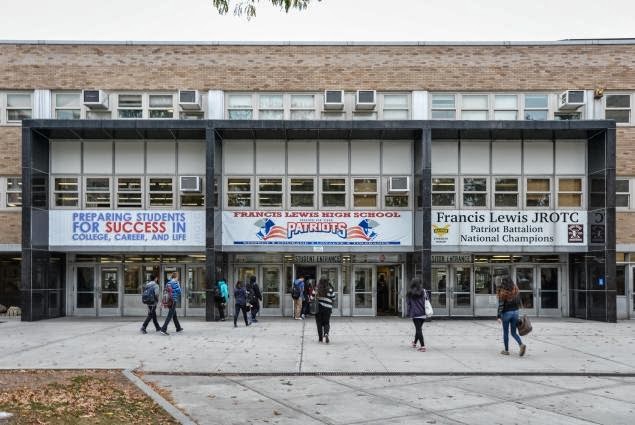 At a time when small schools are the darling of the Bloomberg administration, Francis Lewis High School — the fourth largest in the city — prides itself on its size.

With more than 4,000 students, the Queens school not only serves neighborhood kids but also boasts three elite programs, in law, humanities and the sciences — the last of which had spots for fewer than 2% of the 4,354 students who applied last year.

“This particular school combines all of the great features you’d have in the large or small school,” said Lewis’ new principal David Marmor, a former science assistant principal at the school who most recently headed up the specialized small school Queens High School for the Sciences at York College.

“We are large enough we have the resources and course offerings to tailor to any child’s needs,” he said.

The Fresh Meadows school — thanks in part to the science program — competes with the elite specialized high schools not only for top-notch students in the admissions process but also for elite science honors including the Intel science competition, nicknamed the junior Nobel prize.
Posted by Queens Crapper at 12:47 AM

Glad to hear the teachers and principals continue to keep offering a quality education at that school, but Francis Lewis has been cited as overcrowded for years, in stories such as this.

(quote)
"One of Francis Lewis High School’s first yearbooks explained that the school, which just celebrated its 50th Anniversary on Saturday, May 15, was originally built to hold 2,400 students. Now, nearly every inch inside – and some space outside – the school building is being occupied.

Closets have been turned into offices. Four trailers housing eight classrooms have been placed behind the school to provide extra classroom space. Lunch periods begin before 9 .am., and navigating the hallways during a change in classes can be trickier than a pop quiz. Even with the trailers, the school is forced to run on a five-session, 14-period school day."

As of 2009, according to the NY TImes, about half of students apply from out of zone.

Francis Lewish is doing something right, but this isn't sustainable. Why can't we have more good public high schools in Queens?

Francis Lewis is a great school that is being brought down by this RTTT, Danielson, Common Core and other nonsense. I taught at FLHS from 1984 until 2011 and loved the kids and the staff. In fact, the number of teachers who I would not have wanted my child with could be counted on two fingers. I taught special education for three years and math (my license) afterwards. In the beginning, education was the focus, not stats. Kids were worked hard to pass RCTs and regents and when they succeeded, it meant something. We didn't give out answers or pass them with scores of 27/89. If they cut, they failed and repeated.They couldn't go online and do a few questions for credits. APs were master teachers who knew their subjects and cared about people.

Closing neighborhood schools has also brought FLHS a population of students that are low achievers. And, while there is nothing wrong with a diverse student population, there is something wrong with a system that penalizes its staff for not being able to reach 100% of these students. I always loved teaching these students and took pride in their achievements but often could not get more than 60% to pass. My AP would have been on my back for that but those kids passed and passed in a great school environment. They might not have passed somewhere else.

Francis Lewis was great and is great and will always be great as long as the politicians and the policy makers leave it alone and let the people in the building, the ones who know and care make the decisions that feel are correct.

This school is great if you don't have a problem with thousands of out-of-control kids running through the halls shouting motherfucka this and motherfucka that and referring to the female students as bitches! These are NOT neighborhood kids - they are bussed in from ghettos! It's a regular Blackboard Jungle!!!

I once met with a family member's 20-something, inarticulate, dumbed-down, clueless guidance counselor that failed to help him in any way whatsoever. And she had a MASTER'S DEGREE! She was a complete idiot that could barely speak English!!!!

If this is an example of a great school no wonder Queens has turned into such a low-rent, third-rate borough!!!!

My older brother went to Flushing High, my sister went to Francis Lewis, and I got sent to John Bowne. Crazy.

I went to this school about 15 years ago and it was ridiculous! I had classes in the trailers! I think if the city gets enough funds, they can certainly build another floor on top of this school..it is SO overcrowded! I had read that 80 percent of the population is Asian!! How do you figure that there is a higher black student rate in Flushing HS and a very low rate of Asians in Flushing HS...but a higher Asian rate in Franny Lew when Franny Lew is a lot closer to Jamaica than Flushing is?!! Am I missing something? Who lives in Flushing?- not a lot of black students thats for sure!! The nyc school system sets "minority" students up for failure!! How do you shut down a "low performance school" then move those same kids into the SAME school with just a different name? It makes NO SENSE!! In my opinion, you need diversity in the schools in order for "minority" kids to succeed...when kids get around their own "race" or "group" that is when kids, I believe, act up the most. I grew up in Bayside and in the 1980's-90s I went to school with a lot of black students and they turned out to have decent jobs (I still speak to quite a few of them)and they were not so rowdy. District 26 had good schools back then and it was because (I believe) of the diversity in the schools back then.

Holy crap has that place changed..talk about vibrant & diverse it looks like the probation dept at the Queens courthouse

I won 2nd place NY State wide Science fair # Francis Lewis some time in the 70's. It was one NICE school and area at the time.
I modulated a helium neon LASER with a Eimac power triode to make wireless voice calls across the room. (it also could send decent quality BW NTSC video)
Mayor Abe Beame was at the other end one evening. I got $75 bucks and plastic trophy ---cheap bastards even those days.
1st place went to a black kid who grew beans (or was it blue corn)something stupid like that. The teachers later told me it was per-determined that a "minority" had to receive 1st place.

Simple answer - the socio economic background of the surrounding area. Striving immigrants, largely Asian, with or without education but working their asses off to achieve and instilling these values in their children.

Hopefully DeBlasio comes to understand that kids who come from resources will always have advantages over kids who do not have resources. No matter how you try to change that. And the best resource for a kid is a good solid home where education is paramount.

the students who march in the LittleNeck/Douglaston Memorial day Parade are the class of the parade,each year.

thanks director of the group.

Why waste money on the NYC skoo system?

Who in the private sector would hire one of the dumbed down morons coming out of the communist unionized skoo babysitting system?

Nobody learns anything but crime prevention is key here. Keep the feral beings in the skoo, try to propogandize a few, and prevent crime.