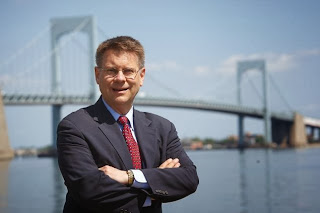 A Queens Democrat is making a bold statement in the election to succeed embattled City Councilman Dan Halloran — he's backing the Republican over the Democrat who beat him.

Paul Graziano, a civic leader, will endorse Republican Dennis Saffran Tuesday. He lost to Paul Vallone in the Democratic primary.

Graziano blamed Vallone for mud-slinging campaign literature that targeted them. The flyers were sent by Jobs for New York, a real estate industry political action committee that endorsed Vallone.

Since Vallone’s developer-aided win, Saffran, chief of the appeals bureau for the Nassau County Attorney, has hammered him as too cozy with the real estate community.

In addition, Saffran has promised to push for a law that would bar sex offenders from living within 500 feet of a playground or school — slashing the current limit in half.

Vallone got some other bad news in the race: The narrow loser of the Democratic primary, Austin Shafran, is not making an endorsement. He was also on the receiving end of the questionable flyers.

Also got word that neither Chrissy Voskerichian nor Steve Israel nor Tony Avella are endorsing Vallone.
Posted by Queens Crapper at 12:54 AM

Not a good sign for the Vallone family interest! Lets hope the voters get the message.

Good for Graziano. This whole idea of party lines is bullshit. Just put the candidate in office who you feel is the best person for the community. We have got so wrapped up into party lines and how is that working out for us.

I guess stinky really is stinky his fellow dems don't even want him in. Good for Graziano for putting the community needs before politics.

Okay - so now I'm voting for two Republicans - this is a first!

Arcabascio for BP and Saffran for Councilman!

It's good to shake things up - perhaps the Dems will wake up!!!!

Graziano endorsement won't matter. Now, if Avella endorses Saffran, it will make a big difference. But this will not happen, the always loyal Democrat Tony will not endorse a Republican.

Graziano's endorsement will absolutely help Saffran. Despite what the Vallone troll states above, Graziano got 17% of the primary vote, and is very well respected for his preservation work throughout the District. Avella's refusal to endorse Vallone is an implicit endorsement of Saffran. So much for Vallone's claim that the Democrats would rally around him!

Austin Shafran is sending a message by not endorsing Vallone. He obviously is young and plans to run for office again, so he can't afford to antagonize the Queens Dem machine - but many will interpret his non-endorsement of Vallone as an endorsement of Saffran.

Meanwhile, the two hacks, Gary Ackerman and Chuck Schumer, have endorsed Vallone - yet more reasons to vote against him.

Saffran is a good man, an excellent attorney and can work with both parties. He is the CLEAR choice in the city council race.

Vallone came into this district several years ago when he ran, and lost, in the democratic primary. Subsequent to that loss he was on CB7. Many urgent community issues were brought to his attention over the past four years and he did not participate in any of them until this election. He runs on his family's agendas and nothing else. The Vallone family's last and latest project in cd19 was the housing development on the contaminated brownfield site in Whitestone, which will only increase population density and traffic in an area that cant use more. Vote for Saffran!

I recently saw Saffron at a debate and thought he carried himself with intelligence and class. Two ingredients CD 19 desperately needs. He doesn't feel the need to create the drama that seems to follow the Kardashians oops I meant Vallone.

"Paul Vallone has had no interest or experience taking care of the issues that affect our neighborhoods, as was proven during the Primary campaign when he refused to answer even simple questions from the public at the debates that were held – and didn’t even bother to show up to the one debate focused on overdevelopment issues of our Council District.

"In addition, his unbelievably offensive, slanderous and negative mailings and personal attacks, which focused on character assassination of his opponents and used religious bigotry in an attempt to get Catholic parishioners to vote for him, coupled with his overwhelming funding from the real estate industry and other special interest groups, clearly show that if he is elected to the City Council, Paul Vallone will not represent the interests of the residents of our neighborhoods, only those of the real estate industry and clients of his family’s lobbying firm."

So the UFT just endorsed Vallone stating that he has been a great defender of public education. When? How? His kids go to Catholic schools. He has no command of the issues and has not been an advocate for the public schools, unlike Saffran whose kids attended PS 98 and MS 67 and went on to great high schools and colleges. What a sham! Where doeS Vallone stand on charter schools? Maintaining the high standards for entry to the specialized high schools, that de Blasio want to seriously water down. Vallone does not speak to these important issues.

Vallone is nothing more than a political hack--banking on his family name---certainly not his record (or lack thereof) to get him elected! Saffran will fight for our community, maintain high educational standards (unlike Vallone--Saffran's kids went to NYC public schools--and thrived--and Saffran and his wife were very involved). As Graziano stated--" Voting for the best person in the race is more important than voting for your party." VOTE FOR SAFFRAN on Nov. 5th--the only honest, committed candidate who will devote 200% of his time to the District--unlike LAZY VALLONE who has been AWOL during this campaign!!!