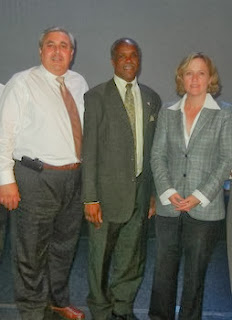 I wanted to give everyone an update as to the current situation regarding the QPTV debate and the sudden change of plans in airing the taped debate of October 10th, 2013. Yesterday, Friday the 18th, we met with the Queens Chronicle to do an interview regarding my candidacy and the Queens Borough President race. During our discussion the topic of the debate was brought up and apparently they were informed by QPTV that there were technical problems with the taping and therefore would not be airing the debate. Ladies and gentlemen, that is a blatant lie! We were contacted by QPTV on this past Wednesday and were advised that the debates would not be aired because Candidate Everly Brown was not included and therefore they were not airing it. That's rather an amusing position to take considering that candidate Everly Brown was not present for the first 45 minutes of our previously taped and broadcast forum and they had no problem airing that one. We suggested that in all fairness, we understood and that we believed that the debate should be performed again to include Candidate Everly Brown. QPTV's response was that the candidates have busy schedules and it is very difficult to arrange. Really?? I know I can make it and Everly Brown can make it and we have full time jobs in addition to our efforts of running for Queens Borough President! Did they ask Candidate Melinda Katz? She should have time, she's the only one that quit her job to be a full time candidate. Certainly if Mr Brown and I can arrange our schedule's Ms Katz can make the necessary accommodations. Besides, I was asked to alter my schedule for the first debate from 1:30PM to 10:30 AM to accommodate Ms Katz schedule and I did in an effort to ensure that the people of Queens would have the information and insight of who the candidates truly are. It is a despicable and deplorable act that this Publicly funded television station has engaged in with the withdrawal of this scheduled airing of a debate when the outcome of this election will effect the 2.3 million people of Queens. The people have the right to know and the people PAY for this right through the tax dollars that fund QPTV.

I left a message at QPTV to discuss this matter yesterday but I have yet to receive a return call. I suggest as taxpayers and residents of Queens you too put a call in QPTV and demand to know why this debate is not being aired. They can be reached at 718-886-8160.

It's named QUEENS PUBLIC TELEVISION for a reason, it's publicly funded to provide a service to the people, not just SOME of the people but ALL of the people.

Well, I had no idea that Everly Brown was still in the race. He is running on the Jobs & Education line. His website hasn't been updated in a while.
Posted by Queens Crapper at 12:06 AM

It's all Katz' doing ...100% sure she threatened QPTV not to air the debate.
Sneaky as always.

My dear Mr. Arcabascio: This is to inform you that Ms Katz (aka "The Happy Homewrecker") cannot at the present time change her schedule to accomodate your request. She is in the process of being turkey-basted by that bald-headed beret-wearing bozo-buffoon, "The Backdoor Man", Curtis Sliwa. Please have patience while her gonads get gooed.

It seems that most of the people that live in your stated community, Astoria, have never heard about you or even know you exist.

However, the more enlightened of them find it curious that you have come out of the woodwork as a Vallone Clone representing yourself as an anti-progressive pro-Bloomberg development friendly empty suit who opposes a pro-progressive pro-development pro-machine candidate.

For some reason, I feel (slightly) more comfortable with "Honest Joe" Crowley than "Big Daddy" Vallone.

Where on earth did you did up that fabrication?

Express your outrage at this obviously anti-democratic move on Katz's part.

Where does Congressman Crowley live? said...

Katz gets in. Hauls in tons of dough from the developers. She hands it over to Sliwa who may soon owe big bucks to his ex-wife Mary and their handicapped son, Lil Chester.

It stinks to high heaven. Right under your noses.

This I gotta see. I hear Katz is a master debater!

This sounds so very suspicious!
An investigation needs to be carried out on this.

This is such total bullshit, not airing a debate.

As for anonymous who stated "My dear Mr. Arcabascio, However, the more enlightened of them find it curious that you have come out of the woodwork as a Vallone Clone representing yourself as an anti-progressive pro-Bloomberg development friendly empty suit who opposes a pro-progressive pro-development pro-machine candidate."
------------------

Do you even know what the fuck you are talking about. Again another uninformed or misinformed moron. I actually know Tony and he is far from a Vallone clone. Some of you are just plain bitter assholes that know shit.

I think Katz's actions speak for themselves! This is how she will be if she's elected! Just vote Arcabascio and forget about her.