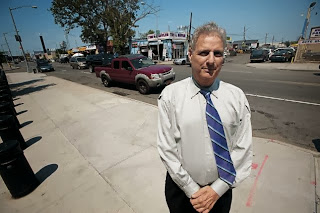 Fledgling businesses will be able to avail themselves of some incubator space at the massive Willets Point development, officials said Tuesday.

The 18,000-square-foot space — to be split between two different sections of the development — will be operated by the Queens Chamber of Commerce.

The companies will receive a 30% to 40% discount on rent at the space and receive free trainings and other services, he said.

The plan for the incubator was a little-known detail buried in the list of concessions agreed upon by the developers, the Related Co. and Sterling Equities.

The duo will give the Queens Chamber $165,000 to help fund the start-up costs for the entrepreneurial space.

One possibility, he said, would be to utilize the space as a local food court, which would enable area eateries to share one industrial-sized kitchen and save on costs.

If space permits, the incubator could also house smaller storefronts, which would be occupied by merchants who hope to appeal to the area’s ethnic enclaves. For example, an Indian Sari shop from Jackson Heights.

This makes a whole lot of sense, doesn't it? Evict currently operating businesses that provide something useful in order to open a fast food court and recreate 82nd Street. What would we do without innovative ideas like this?
Posted by Queens Crapper at 12:13 AM

Jack Friedman is an utter buffoon. There are scores of existing Willets Point businesses engaged in commerce every day, yet Friedman's Chamber of Commerce does absolutely nothing to support them or to ensure their survival in the wake of the development plan that Friedman supports.

We don't need anymore fast food places! There's a restaurant on practically every corner in the five boroughs!

Great fast food places (one of the biggest culprits of litter). So replace the establishing businesses with billion dollar fast food places who pay their employees minimum wage, where they will have to live in illegal apartments, and continue providing a service that causes obesity, diabetes and other health issues. Sounds like a plan.

Just what we need another McDonald's. It's going to be horrible.

It's industrial now, but it's supposed to be. You go there for car repairs and it's not supposed to look nice.

Now it's going to be full of crap food, crap vendors, crap traffic.

Is that why it's on Queens Crap?

Who the hell is going to patronize these businesses since there won't be any housing?

Ahh, yes the ubiquitous food court. When all else looks like it won't support economic activity, just throw food at them! Big, greasy, fat, fat, food.

Jack Friedman; now that name sounds familiar! Wasn't he the three card monte dealer who had a table at main and Roosevelt in the 70s!

Can it be true what we hear--that former bovine borough president, Claire Shulman, has just put in her bid for running a burger joint at the Willets Point food court?

I'd rather see wearing an orange jump, suit serving a prison term.

For example, an Indian Sari shop from Jackson Heights.

Plus-sized Indian aunties can buy their saris before every Mets home game!

Give the food court to all of the illegal food vendors that have taken over FMCP. Since there is no law enforcement
In the park, this would be a way to get clean up the park.