Decrepit traffic island to get some love 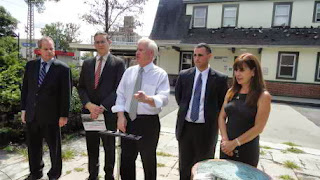 A small traffic island in front of the Long Island Rail Road station is getting upgraded after decades of neglect, state Sen. Tony Avella, D-Bayside said.

The senator said he noticed the dangerous conditions on the island while giving a recent press conference at the site.

The senator said it had always been assumed that the LIRR was responsible for the property, but it turned out to be under the city Department of Transportation’s jurisdiction.

Avella said he contacted the DOT, which immediately improved the walk-through path on the island.

He has also asked the city’s Department of Parks and Recreation to remove three dead trees on the island. The agency has said it would do so within 30 days.

Now, Avella is working with the Bayside Business Improvement District to develop a long-term strategy to enhance the island and repair the long neglected and vandalized “sun dial,” which has been a main feature of the site.
Posted by Queens Crapper at 12:05 AM

Just like the decrepit remains of the Flushing Worlds Fair;
the abandoned LIRR Rockaway branch, the failing LaGuardia Airport, and the collapsing Queens Blvd roadbed,
50 years later, the city turns it eye away from the needs of Quueens County.

Strange isn't it? Five years ago he came into Whitestone running for mayor and was apprised of the intolerable traffic conditions coming off the Whitestone Bridge onto 5th and 3rd avenues and chose to do nothing. Said it was Bloomberg's fault and left. Odd huh? Cannot secure the 6 vacant acres of former CYO property for community youth but now is Johnny on the spot for a cracked sidewalk a few blocks from his office. Did he introduce the legislation he promised about stopping pensions on convicted felon politicians? Go figure! Do you get the picture?

Go Tony! I have been wondering about the condition of that plot for years. I too thought it was the responsibilty of the LIRR. There is a beautiful sundial that has been broken for years and the cement is crumbling and a pedestrian hazard.

To the second anonymous, Avella is one person going up against an NYC government of morons. There is only so much one person can do.

Everyone complains about that stupid exit off the Whitestone, but there is nothing that you can do. You can't close an exit off a highway that's been there for decades, or make it a traffic maze where every street is a one way. If you bought a house after the highway was built you knew it was there, you can't now complain. The exit is closed now for construction and look at the mess it creates in College Point, what's the solution? Close those exits?

Avella has pushed to stop the overdevelopment of the area and that's the next best thing, less development, less traffic, less cars in that area.

And the city securing vacant land for the kids, great idea. But it takes more than one elected official to push for it, and in Queens our elected morons are only worried about using eminent domain to give land to developers, so it won't happen.

But keep bashing Avella, the one guy who is trying, I'm sure Vallone will work wonders for us in the area.

Go Tony? For years you say! And Tony just all of a sudden like decided to do something. Must be trying to make up lost ground or something. He's apparently been walking past it unnoticing for more than a decade easy.

Here are the trolls from county hq going after Tony Avella again.