Ridgewood site may be Superfund eligible 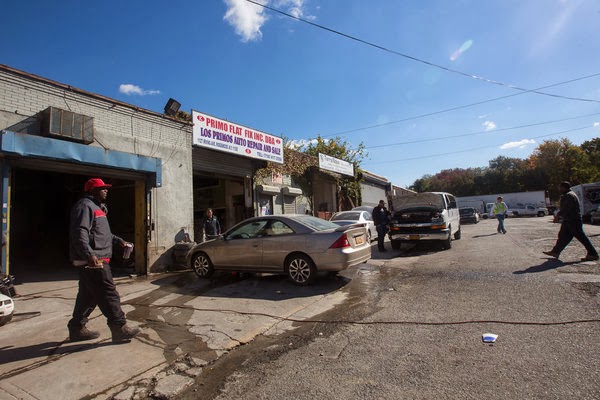 City, state and federal agencies have long known that an industrial site in Ridgewood, Queens, contained radioactive material. The location, currently home to an auto repair shop, a construction firm, a warehouse and a deli, was once used by the Wolff-Alport Chemical Company, which sold thorium to the federal government for research on atomic bombs.

Until recently, officials considered the contamination level low enough not to be of concern. But over time, regulations changed, and inspectors began making repeat visits to the site, conducting surveys of radiation levels. The latest comprehensive federal study, released in February 2012, found levels significant enough to conclude that “workers at the auto body shop and pedestrians who frequently use the sidewalks at this location may have an elevated risk of cancer.”

With that, the site will soon be considered for Superfund status, the Environmental Protection Agency said.

The Wolff-Alport Chemical Company was, for three decades, a supplier of rare earth metals, the agency said in its report. The company dumped thorium and some uranium into the sewer system as waste byproducts until 1947, when the Atomic Energy Commission, the successor of the Manhattan Project, began buying thorium for research, according to government documents.

Stephen I. Schwartz, editor of the The Nonproliferation Review, a journal on nuclear weapons, said the Manhattan Project and ensuing research left contamination sites around the country, but most fall under the Department of Energy’s purview and have been addressed. A sprawling site in Hanford, Wash., is still under remediation.

The nondescript building sits along the border with Bushwick, Brooklyn, near Long Island Rail Road tracks. Residential homes line nearby streets, and a day care center and a public school sit two blocks away. An agency representative said these locations did not show high levels of radiation.
Posted by Queens Crapper at 12:50 AM

It will be interesting to see how long it takes to get a clean up. In Staten Island, at the foot of the Bayonne Bridge, we have a Manhattan Project spill, id'd in the 40's, also near residential &c, that STILL has no action. The Bayonne Bridge roadway project is going on, and the DoB & Mayors Offc of Enviro Remediation just ok'd a site across the street for 87 two-family homes (they did find mutagenic materials, but no problem: the developer just has to cap the contaminants.) Oh, and this is on the edge of the Kill Van Kull, a 100-year (hah!) flood plain.

You mean they think they can dig down a few inches, remove soil, cover it with plastic an new soil, like on a brownfield site, and the radioactivity is capped? C'mon!

You mean they think they can dig down a few inches, remove soil, cover it with plastic an new soil, like on a brownfield site, and the radioactivity is capped? C'mon!
-------------


You mean like Newtown Creek that had 8 major hydrocarbon fires in just one decade - and it was the 1880s?

Now think of the fun for every decade since.

Heavy metal ions can be as dangerous in every respect as radioactivity.

I would go down further - perhaps a handful of inches. That should do the trick.

That's great. Now Paul Vallone can lobby for the developer and get the toxic soil from the Whitestone superfund site dumped here.

Keep moving the contaminated soil around as he makes money.

So where are the 10 feet long roaches and talking turtles?

Is this where Walmart wants to build its store?

Huh ?
The only tracks I know down there are the non electrified CONRAIL "Bay Ridge" from the Ridgewood/Glendale border to a defunct rail barge dock yard on the east river.

I doubt that the Vallone interests will ever get all the contaminated soil out of that Whitestone site, even if they wanted to. Wanna buy a house? We've come so far since love canal!