Lhota not too enthused by the Queens GOP 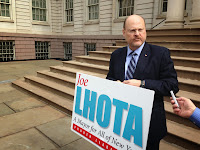 Two sources with direct knowledge of the situation said Lhota consultant Jake Menges informed leadership of the Queens Republican Party of the campaign's decision last weekend not to publicize the endorsement. Mr. Menges not only rejected Queens Republicans' offer to have an endorsement press conference, but asked the party not to issue a press release touting its backing of Mr. Lhota, the sources added.

Such an announcement could have also brought attention to infighting in Brooklyn Republican Party, and to the fact that Mr. Catsimatidis has not formally endorsed Mr. Lhota, the Lhota campaign feared.

But you know who wasn't ashamed of possibly snagging the endorsement of the Queens GOP? Paul Vallone. Back in 2009:

A source close to Vallone’s campaign said the candidate was interested in the GOP nomination because he believed in race against Democratic primary winner Kevin Kim, Vallone would “win the one-on-one match up with him easily.” Halloran added that Vallone, who faced attacks from his Democratic rivals during the primary campaign, would be supporting him over the Democratic nominee in the race, Kim. “Paul is really like a kindred spirit,” said Halloran.

And then there was his bid for the Conservative line...

According to Tom Long, chairman of the Queens County Conservative Party, however, Vallone told him this during a candidate screening with the party that he is, in fact, pro-life.

Despite once being considered for the GOP and Conservative lines, Vallone is now the Democratic nominee and he's pro-choice. How the hell did that happen?
Posted by Queens Crapper at 12:35 AM

The 2nd debate changed my vote to Lhota. Sorry, you cannot be for massive development of the waterfront and be a real Democrat.

No Democrat will put people in harm's way by doing that, have Ratner pay for their birthday party, and take credit for affordable housing to be built .... someday.

When you remove Chrissy Quinn from the equation he looks so different.

He is branded a "liberal"?

Wow, how the Democratic Party has lost its way....

So lets vote for the real thing. As bad as the Repbulicans are, they will make the trains run on time.

"How the hell did that happen?"

(“No one in this world, so far as I know — and I have searched the records for years, and employed agents to help me — has ever lost money by underestimating the intelligence of the great masses of the plain people. Nor has anyone ever lost public office thereby.” - H.L. Mencken, 1926)

Despite once being considered for the GOP and Conservative lines, Vallone is now the Democratic nominee and he's pro-choice. How the hell did that happen?

It's easy when one doesn't have any beliefs or morals: Paul Vallone will say anything, and do anything, to get elected. He's the original chameleon, changing his "colors" based on the audience.

Well if he's pro choice it would make sense that he has no beliefs or morals, but first I've heard it.

As far as endorsements, there are only two cases where this would matter here:

1) The candidate has a chance of winning.

2) The candidate had a LOT of money to throw at the party.

Neither is true in this case.

George, you gladden me by quoting Mencken.

CATS lost, goodbye Ragusa and Co. Lhota is going to lose, goodbye Ulrich and Co. Ulrich is term limted and can't get elected outside his district anyway, goodbye Ulrich. Turner is not a member of congress, goodbye Turner. Time for some real fresh blood.

During the Primary, there were mailings from the Katz camp that attacked Peter, Jr., of being conservative, anti-choice, and therefore anti-woman. I know that Peter, Sr., supposedly attends mass every day and considers himself a very good Catholic. If that's the way that the boys were raised, then it's not surprising if they really are anti-abortion - but they shouldn't try to hide it, if that's who they really are. Many people respect politicians with principles and convictions (no pun intended), even if they don't necessarily coincide with our own beliefs. Better to know where someone stands.

This democrat is voting for SAFFRAN and LHOTA. I don't care what party anymore I care about integrity and truth.

I'm not voting for deblasio...we don't need another illegal lover in office! Obama and schumer is bad enough!!

Ulrich is term limted and can't get elected outside his district anyway, goodbye Ulrich. Turner is not a member of congress, goodbye Turner. Time for some real fresh blood.

Wasn't Ulrich heralded eight years ago as the "fresh blood" that the Queens Republicans needed? Well, he tried running for State Senate against Joe Addabbo and lost. Is it time to try the Assembly? Can he beat Phil Goldfeder?

with a 5-1-dem to gop registered electorate for mayor in nyc, the gop does not matter.

when the prog/communist.marxist nyc government takes over,the lemmings will have to take cover from the crime increase( 2500 homicides per year during the koch/dinkins mayoralty)and increase in property taxes.

the minorities population survived under Rudy's nypd tactics in the 1990's.

most of koch-dinkins minorities died among the 2500 killed. see the stats ,if you want truth.

NYC does, truthfully, need Rudy back, but I hear he's very busy and hasn't lost his sanity, entirely!

when the prog/communist.marxist nyc government takes over,the lemmings will have to take cover from the crime increase( 2500 homicides per year during the koch/dinkins mayoralty)and increase in property taxes.

I would say that property taxes, as well as water rates, have gone up much more under Bloomturd than under Koch/Dinkins. My property taxes have doubled since 1999.

Why do I get the feeling he's a Lhota wind? What? Does he think he's a Manhattan democrat? Four years of this guy or Duh Blahsio and I'll be ready to pack out of here! God help us!

"Ulrich is term limted and can't get elected outside his district anyway, goodbye Ulrich. Turner is not a member of congress, goodbye Turner. Time for some real fresh blood.

Wasn't Ulrich heralded eight years ago as the "fresh blood" that the Queens Republicans needed? Well, he tried running for State Senate against Joe Addabbo and lost. Is it time to try the Assembly? Can he beat Phil Goldfeder?"

He can't beat any Democrat. Look at the numbers. He's nothing special, might even lose this race.

LOL!
The Queens GOP?
They're a joke!
Look who's still running the clubhouse!

Anon No. 17: The Democratic candidate is Lew Simon. That's how hard the Deomcrats are trying to beat Ulrich.

My impression has been that Ulrich has been a very decent guy for his constituents...Is that the problem?

"My impression has been that Ulrich has been a very decent guy for his constituents...Is that the problem?"

No problem at all, but the reality is, if he wins, this will be his last term as a member of the city council, and then next re-districting, any cahnce of any Republican ever getting elected will be done. He's trying to ride Lhota's coatails and with out any elected Republican in City Hall or Albany, he's got no where to go. he can't win an Assembly or State Senate seat.

Dump Ragusa. Improve the GOP overnight!
How does this f--king "yo" keep his position?

We need a real 2 party system competing in Queens....not the great democratic dictatorship...run by clubhouse officials who live OUTSIDE of NYC..in ANOTHER STATE!

Healthy competition is what safeguards a republic.