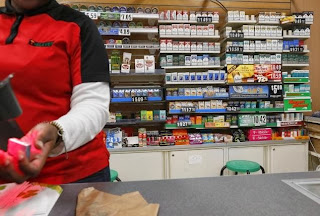 Opening a new front in the city’s war on smoking, the New York City Council voted Wednesday to hike the legal age for buying cigarettes to 21.

Mayor Bloomberg promised to sign the bill, making it certain that New York will become the first major city in America to adopt such a high age requirement.

Bloomberg said the new age requirement will prevent more teenagers from developing a smoking habit, saving lives. Research shows that more than 80% of smokers in New York began lighting up before the age 21.

Most smokers I know began lighting up before the age of 16. Don't think this will do anything except make the mayor feel good.
Posted by Queens Crapper at 12:21 AM

But you can still join the Army, fight for your country, at the age of 18.

This will simply mean increased traffic to stores outside of city limits and a loss of revenue to the city.
Politicians must live in a vacuum. They think just because they make a law people will just obediently follow it. People will always find a way around silly laws like this.

you can actually enlist in the Army at age 17, which puts the US in violation of the convention on child soldiers, along with a handfull of other states and entities, such as militia groups in Liberia and Sierra Leone. But then, taking a puff is more dangerous than fighting taliban in Afghanistan, right?

America, a puritanical cesspool of immorality. When I was 18, 1969, on a commercial flight to California, headed for a military ride to Vietnam, a flight stewardess asked me and my buddy, both In full dress uniforms, if we wanted a drink. My pal said sure and she asked if we were both 21, he said he was I said I was 18, she said no drinky under 21.My pal ordered two for himself, we drank. What a fuckin country. I'll never forget! But you can give your life for every shithole conflict on the planet.

"you can actually enlist in the Army at age 17, which puts the US in violation of the convention on child soldiers"

Minor nit, while you could enlist at 17 you could not get orders to a combat assignment unless you were 18.

Been there and done both.

I say let them smoke!

What does joinging the army have to do wivth drinking and smoking?