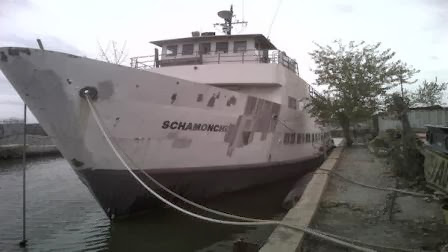 A boat in Brooklyn was vacated by firefighters Friday after a tip that people were illegally on board.

FDNY searched the boat and found evidence that people were living on the boat, and using it as a work space.

Firefighters went to the boat at around 11:30 a.m. after receiving the tip. They found 10 people on board at the time.

The boat, docked near Morgan Avenue and Stagg Street in Bushwick, has been deemed a hazard and vacated.

An area was carved into the hull of the boat and separated into nine bedrooms.

Artists and sculptures were using the boat as a work space. There were paint cans, gasoline canisters, and candles on board.

There was also a hot tub and an area on the deck being used as a pool.

Water and electricity were running to the boat from a nearby, vacant lot.

The boat was not registered with the Coast Guard.

I wonder if they realize the history of the spot they're inhabiting...
Posted by Queens Crapper at 12:11 AM

Sounds so cool - I want to live on the Hipster Boat - lol!

Now, what exactly is a Hipster? Can you be a hippie or a yippie to live on the boat as well? Or it's only for hipsters?

This be the old "Island Queen" that ran between Falmouth and Oak Buffs (Marthas Vinyard)
I rode it many times as a kid many times as a kid. It was then replaced with a new one and the did service somewhere in New Bedford.
I haven't a clue how people could live in it, it was a basic open summer service ferry with UN-insulated steel walls and lots of openings. I dont remember it even having toilets or heat