Dennis Saffran is the only adult in the CD19 race 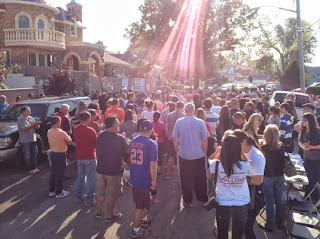 There’s no question that most Whitestone residents oppose a high school on the former Cresthaven Country Club property, but there is controversy over last week’s rally at the site.

Although the event was organized by Kim Cody, president of the Greater Whitestone Taxpayers Civic Association, emails and literature were sent out from the Paul Vallone campaign. Vallone is the Democratic candidate running for the 19th City Council seat being vacated by Councilman Dan Halloran (R-Whitestone), who is not seeking re-election after being indicted on federal bribery charges.

Cody is angered that Vallone turned the legitimate concerns about a proposed high school on 150th Street near Fifth Avenue into a campaign rally. “Paul’s volunteers handed out press releases and no one else spoke,” he said. “We’re a nonpolitical civic and this should not have been a political rally.”

State Sen. Tony Avella (D-Bayside) announced last week that the School Construction Authority is looking at the site, but a Department of Education spokesman said there are no definite plans, adding it was one of several locations being surveyed.

Cody said he informed Vallone about the issue and invited Dennis Saffran, the Republican candidate, to attend. “But Vallone took over at the rally and his campaign wasn’t happy Dennis showed up, although he did not speak.”


This is the text of the endorsement from Paul Graziano:

“The 19th Council District is one of the last truly livable places for the middle-class left in New York City. I have committed my life to protecting and preserving our beautiful suburban neighborhoods as a civic leader, professional urban planner and historic preservation advocate for the past two decades, and it was the main reason that I ran for office this year.

I've worked alongside Dennis during the past decade in his capacity as a longtime civic leader in Douglaston and believe that he will make an excellent Councilmember for the 19th District. He cares about the same things that the residents of our council district care most about: stopping overdevelopment of our neighborhoods, making sure our public schools remain the best in New York City and reinforcing the excellent quality-of-life that we deserve in northeast Queens.

On the contrary, Paul Vallone has had no interest or experience taking care of the issues that affect our neighborhoods, as was proven during the Primary campaign when he refused to answer even simple questions from the public at the debates that were held - and didn't even bother to show up to the one debate focused on overdevelopment issues of our Council District.

In addition, his unbelievably offensive, slanderous and negative mailings and personal attacks, which focused on character assassination of his opponents and used religious bigotry in an attempt to get Catholic parishioners to vote for him, coupled with his overwhelming funding from the real estate industry and other special interest groups, clearly show that if he is elected to the City Council, Paul Vallone will not represent the interests of the residents of our neighborhoods, only those of the real estate industry and clients of his family's lobbying firm.

This is why I am crossing party lines to support Dennis Saffran for City Council. It is not a decision I make lightly, but I have always believed that we as citizens should support the best candidate for a political office regardless of what political party they happen to be registered with. And, considering the fact that Paul Vallone almost ran on the Republican Party line and sought the Conservative Party endorsement in 2009, I believe it is a complete non-issue in this particular race.

Therefore, I urge all of my supporters, whatever your party affiliation - as well as those 70% who did not vote for Paul Vallone in the Democratic Primary - to vote for the best person to represent us in the City Council: Dennis Saffran."

That was a great endorsement speech by Paul G. It's so refreshing to listen to people who are not afraid to tell the truth. Good luck to Dennis. You got my vote.

Would Avella dare to PUBLICLY endorse Saffran, as Graziano did?

I just took a virtual tour courtesy of Google Earth of the area around the old swim club where they want to build the school. There is more "Queens crap" built there than in Flushing! Fedder's specials everywhere. Could not believe it. Are Asians taking over Whitestone?

I always vote for the qualified candidate, regardless. I refuse to be a blind political party follower. That's for the rest of the sheep herd.

Now if I were a real estate developer--then, of course, I'd be voting for Paul Vallone.

It's all plain and simple, folks. The Vallone brothers ("junior" Pete & Paul) represent the interests of over development.

They have attempted to strip mine our streets--digging for gold. When they've finished ruining our fine nabes, they leave a mess behind and move on.

"V" for a Saffran victory--NOT for Vallone!

What has CB7's Chuck Apelian been promised by Vallone to support his campaign?

Shame on you Chuck--and to think that I used to trust you.

Jerry, Apelian was part of Vallones campaign four years ago, he's obviously gonna get a spot if Paulie gets elected, maybe COS. The best idea for that old CYO prop. came from Al Centola, simply because it will save the prop. serve the youth of the community and deny it from the Vallones, Markels, Shulman, Mattones, et. al. It may also go a long way toward saving Whitestone itself.

"The system is overcrowded! we need more schools!"

OK, a few minutes in Jamaica Estates did make my jaw drop. You are right, loaded with Queens crap. There even was one beautiful old house with a brand spanking new front stairway with faux marble columns. Yecch.

We don't need more schools. There are kids from outside the city attending them. Crack down on that and illegal immigration and the "problem" created by unions (smaller class size, etc.) will resolve. Not mention people would welcome schools if it were guaranteed that local kids would attend them. As it stands, communities are overrun with buses and stand still traffic. Why pile on more?

It is a consolation to know that 70% of dems did NOT vote Vallone. There is hope left. I wish every Vallone supporter would attend the debates and see for themselves what kind of person he is. That's when his true phoney valloney colors show the best.

Lombardi's already on the panic attack, what a sad, little, boy.

" The best idea for that old CYO prop. came from Al Centola, simply because it will save the prop. serve the youth of the community and deny it from the Vallones, Markels, Shulman, Mattones, et. al. It may also go a long way toward saving Whitestone itself."

After watching that thoughtful and intelligent video of Graziano and Saffran, it's hysterical to then read Vallone lapdog Adam Lombardi's interpretation of it. Don't know how he can refer to Saffran as a "Tea Party fanatic". Since Adam doesn't allow comments to be posted on his blog, he needs to read Saffran's statement condemning the federal government shutdown and the extremists in the national Republican Party. The only fanatic here is Adam and his pathological devotion to his master.

The endorsement is so insignificant that it required an 8-paragraph blog post from the troll.

This entry brought back long dormant memories of Whitestone Pool. The creepy locker rooms underground, and the fact that you had a lanyard to put around your leg that held the key to your creepy locker! But the pool (salt water) was a lot of fun! CYO if I remember right.

Saffran is not a tea party fanatic, but rather, a thoughtful government lawyer who has spent his whole life in public service and talks about issues that are important to our community. He is out there daily talking to constituents, working hard to understand the issues affecting them and their families, unlike Paul Vallone who doesn't address any issues and merely is banking on his family name. Dennis Saffran is the clear choice on Nov 5!

Lombardi has added a reader comment to his blog posting, obviously from another Vallone troll - unless he simply wrote it himself. (It must be pure bliss to live in such a fantasy world.):

As Paul led all his opponents in pre-Primary polls, they each targeted him for attack, slinging mud at him for the support he received from an organization he legally could not control.

Paul indeed was the only candidate who DID NOT sling mud at his opponents, running by-far the cleanest and most positive campaign of all. -Anonymous"

Adam, you're the yin to my yang - you complete me.

Of course he didn't sling mud - he had Jobs For NY do it for him.

Where is Paul Vallone?? AWOL? I see Saffran everywhere--at train statins ealt in the morning; shopping centers on weekends; at every community event. Folks ask--where is your opponent? Absentee Vallone is banking in his family name-------SEND HIM A LOUD MESSAGE----VOTE NO TO VALLONE---VOTE FOR SAFFRAN on NOV. 5th! VALLONE IS A SHAM!!!!!!!!!!!! LOBBYIST! WILL NOT REPRESENT US FULL-TIME!!!!!!!!

@Jerry Rotundi...I just would like to say that I greatly respect you sir, for always signing your name. I know how easy it is to speak out against things under the veil of anonymity. I admire your candor.

As a lifelong Dem - I will vote for Dennis Saffron as well. Thanks Paul for caring about our nab.