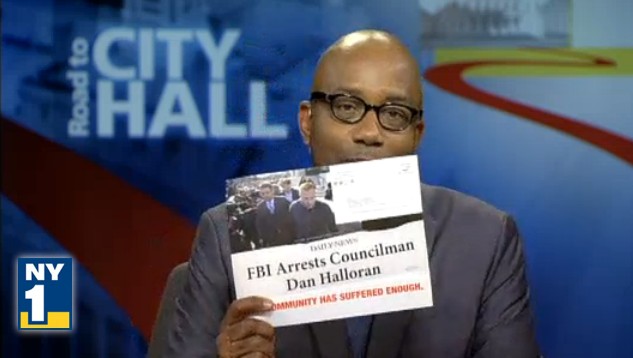 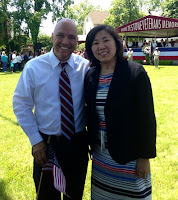 During the course of the City Council Race in District 19, Jobs for New York has sent a series of "hit pieces" against three of the candidates for the benefit of Paul Vallone. The mailers are paid for by Jobs for New York and upon information and belief, were designed, printed and distributed by Parkside. All legally done and done in the name of politics for the good of the county machine and to promote and theoretically ensure the election of a candidate who will serve the interests of his benefactors, the Real Estate Board of New York.

That legally a candidate can have no connection to the sponsor of such correspondence is a convenient legal fiction enacted into law by the very people it serves to protect. Such politics benefits no one but the County machine and candidates who are willing to sell their offices to the highest bidder at the expense of their communities. 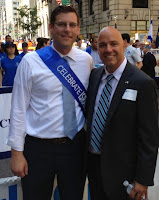 Jobs for New York has thrown down the gauntlet of negative campaigning with a level of vengeance that is beyond comprehension in a local race. The lies, innuendo, out of context quotes and literally inflammatory graphics should be as deplorable to any sitting politician or candidate as they are to me and members of the 19th Council District. They should especially be deplorable to a candidate who continually touts integrity, family values and his Christian church as his hallmarks.

That you all endorsed and continue to support the Vallone candidacy without reservation speaks volumes about your desire to remain in the good graces of the county machine and uncontrolled future benefactors and very little about your actual support of this or any other endorsed candidate. However, there comes a time in human events, including political campaigns, when courage, integrity, decency and standing up against what is wrong separates the public servants from the hacks. 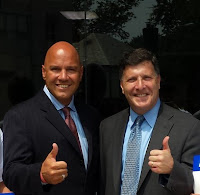 This campaign tactic is one of those watershed events. All of you are current office holders who have either the power to introduce legislation to take back total control of your campaigns and to disallow such spending and return the political process to the constituents you claim to serve or to influence colleagues who have such power. The" poor little candidate" who cannot stop a big bad entity from spewing unwanted campaign literature throughout your districts doesn't play well. It is time to take responsibility for your campaigns and to be accountable to your constituents for what is put out in your names.

This may turn out to be one of those issues which empowers voters to say "NO" at the polls to candidates who support negative independent expenditures, who refuse to take accountability for their campaigns and who are willing by extension to sell their offices. The beginning of such a movement in District 19 may have been the joining of five civic associations in common voice against the practice though the civics themselves support different candidates.

It is unfortunate for the political process, the integrity of your offices and your standing in the community that none of you have publicly repudiated this practice.

And finally, residents of the 19th Council District received this call last night:

Wake me up when the Vallones all get shipped off to prison.

I, for one, am not at all surprised that our political mafioso Vallone is being supported by Congress member Grace Meng.

Grace, herself, is the daughter of a convicted criminal (Jimmy Meng) who was caught red handed trying to pass an $80,000 bribe to FBI agents in, of all things, a fruit basket.

Grace was the successor to that most shady of all congressmen, Gary Ackerman. Ackerman, in turn, was close, through his associations, with that notorious criminal developer Tommy Huang.

What a crew, boys and girls!
Lets not think of them as privateers in the service of government. In reality, they are buccaneers...pirates of freedom...your freedom to be represented truly and honestly!

You all made the mistake of sending Grace Meng to Washington.

Do not compound that mistake by sending Paul, a la famiglia di Vallone, to City Hall.

Send him to Hell where he belongs...along with his friends at the New York Real Estate Board who desire to over develop your fine neighborhoods!

Your investments in your homes is at stake here.
Let's get serious. Make no mistake about it...that phony Jobs For New York group is the developers' ruse to appear like they support labor and jobs.

Their real aim is to swallow you whole!
And they will if their ally and paid lobbyist, Don Paulo, winds up slithering around in the city council chambers.

Carefully examine all the facts. Don't be swayed by negative unfounded statements...such as appear in these sleazy hit pieces.

It's time to call the FBI's anti corruption unit!
This is political manipulation that leads to election fraud.

Now more than ever... Don't vote for stinky.

Though I don't think Grace Meng is anything special, you've got a lot of nerve to cast aspersions at her for those associations.

Grace exhibited her stupidity in a race-bating media appearance, but you are completely out of line to insinuate she's somehow corrupt because of her dad or her predecessor is completely out of line. Either bring substantial proof of her involvement with those people's activities or drop it.

I think the FBI is still working on Grace's case...
Cecilia Chang's , John Liu's, Tommy Huang's too.
Did I omit anyone?

There's a Taiwanese daisy chain of corruption that runs deep here. They've been buying candidates for decades....back to the nostalgic Donald Manes era.

Maybe the Vallones hopped aboard the gravy train. Laundered Taiwanese $$$$$ have found a home in the building real estate industry. Do you know where some of their $$$$$ winds up? Bingo! In political pockets!

Better pull your deeply seated nose out of Grace's butt, before you start spitting crap soon.


"It is unfortunate for the political process, the integrity of your offices and your standing in the community that none of you have publicly repudiated this practice."

They didn't and they won't cause they're HACKS

I like the sentiment of the robo-call, but wish they identified the source. Sounds like something that one of the large municipal unions might do, since they usually provide phone banks to support the candidates they endorsed.

The FBI on Grace Meng? Are you smoking something? Or are you just a bitter, non-Asian living in Flooshing, dredging up every corrupt Asian in Queens just to tar her?

I do not care for Grace Meng, but seriously, after making up crap off the top of your head, idiots like you actually make Meng look justified for her mild racist stupidity at the Boston Market incident.

Quote a source or shut up.

there comes a time in human events, including political campaigns, when courage, integrity, decency and standing up against what is wrong separates the public servants from the hacks.

your surrounding home associations lobby your representatives for your funding and solicit your members cause you now lost 'juice'.

Do not vote for any candidate that is endorsed for the sleazy "Jobs for New York" PAC. As you all know, they have absolutely nothing to do with jobs, affordable housing or the middle class.

Rhea O'Gorman....
Well said! At least you have to guts to say what everyone is thinking.

SHAME on our elected officials for endorsing candidates just because the democratic machine tells them to. Stop selling yourselves. It's so obvious you all supporting Valloney Balloney because you were told to.

Any response from the HACKS?

"Such Brave Words" indeed Rhea! I would like to know what "Anonymous" has positively accomplished in Dist. 19th.? Rhea, I have known you and worked with you for years. You have proven timelessly to go above and beyond for our community, as a volunteer not a paid employee of the city. "Anonymous" who refers to you as "Persona non Grata" is obviously intimidated by your spirit and achievements. Perhaps this commenter is on the side of Vallone and wants to ruin our "quality of life" and therefore perceives you as an unwelcomed person. I know too many people who recognize you as an important and valuable activist in this community. Keep up the good work.

Hmmm is Rhea "Persona Non Grata" because someone can't build their ugly, oversized McMansion? Maybe the commenter has plans for a sky scrapper on Northern Blvd.? People like Rhea, Chrissy and Graziano have worked hard to keep our zoning intact, so commenter it's really YOU who is "Persona Non Grata".

The "Friends of Austin Shafran" has hit back at Paulie Vallone - today was the third anti-Vallone mailing I got from Shafran or his friends this week. This one focuses on Vallone being anti-choice. They dug up a grainy photo of Vallone when he had a goatee - looks a bit evil - with the caption, "Stand up to the war on women. Vote no on Paul Vallone." It's nice to see the heat continue on him.

On September 10 you will all vote for GRAZIANO.

If you select and choose only what you want read in this publication so be it. The test of democracy is freedom of criticism.

On September 10, don't vote for stinky.

Why does every Italian business display a Vallone sign?

Has he paid them all off? Does anyone know?

Vote for GRAZIANO - he's not a member of an evil crime family!

I must have struck a nerve.
I'm a non smoker. What's your brand of Opium?

"Persona Non Grata" comment is a commentary on what happens in Queens when someone stands on a chair and tries to raise the bar.

They get the chair kicked out from under them.

It took Queens decades to get to this sorry state and everyone knew whats happening but just talked about it. Its so easy to complain - you cannot expect us to actually DO something now do you?

I beginning to see some of those Vallone signs in Asian business being removed.

He must have strong armed them into allowing his campaign workers to post the.

You know Asians...they play it quiet like...and don't desire to offend politicians who might retaliate against them.