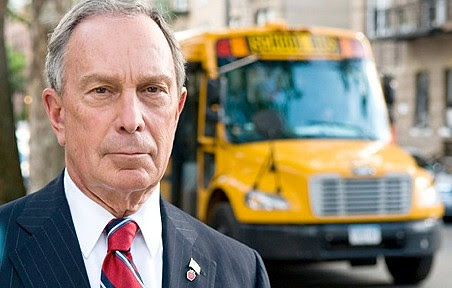 But Mayor Bloomberg's campaign said graduation rates rose just 2.7 percentage points when Thompson was on the Board of Education in the late 1990s.

The mayor says the graduation rate has risen 9.9 points since 2005, the year the state began calculating it the way it currently does.

Well then you can't really make the comparison, can you Bloomturd? How do you explain graduation rates rising when there are so many more bad teachers?

And would you want to send your kids to schools overseen by the man in the photo? Does that make for a smart choice of photo to display on a campaign website?
Posted by Queens Crapper at 12:12 AM

The film maker of this youtube sent it to me.
I think you will enjoy it.
best,
Suzannah B. Troy

I just passed Fire Patrol and it was shut -- I am sure the evil empire of the East Village is looking at it to buy up another historic piece of NYC and destroy it and the plaque honoring an FDNY hero that died was removed so listening to the language of the youtube seemed appropriate.
To see Fire Patrol 2 before it is destroyed completely and underscores that post 9-11 Bloomberg pushed a tsunami of community crushing development and shut our firehouses which makes fire fighters work even more dangerous and jeopardizes our safety. www.suzannahbtroy.blogspot.com
Thanks,
Suzannah B. Troy
www.bloombergnewzzz.blogspot.com

"Well then you can't really make the comparison, can you Bloomturd? How do you explain graduation rates rising when there are so many more bad teachers?"

Good point, Crappy. If there is supposedly so many crummy teachers out there, it would be amazing kids actually improved.

"And would you want to send your kids to schools overseen by the man in the photo? Does that make for a smart choice of photo to display on a campaign website?"

First of all, any photo of him is pretty scary. Second, why does everyone seem to miss the fact that Bloomsnot as well as Kleinturd are NOT EDUCATORS!! Would we want a lawyer to fly a plane? Or a doctor trying a case in court? Or a bus driver going into a burning building to save lives?
These two jokers are businessmen and think that way. Their whole philosophy is about to implode on them. You'll see.

They play a shell game with all these new pseudo schools, sometimes several in a building that weused to call "A school." There is no way to compare because there is no previous statistical record; and schools that are new are given a few years free. This is B.S. BloombergShit.