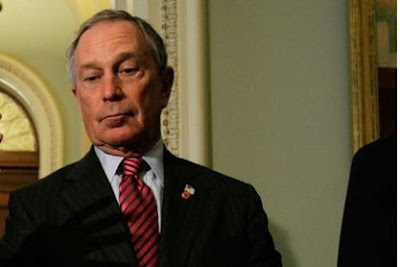 In the previous Quinnipiac poll, released on June 16, Mr. Bloomberg led Mr. Thompson by 54 to 32 percent, and led among blacks and Democrats. But there is an important difference: in the June poll, Mr. Bloomberg was identified as an independent, while in the July one, he is identified as an independent and a Republican, suggesting that party labels are beginning to help Mr. Thompson.

More voters also say that Mr. Bloomberg, who has spent $36 million of his fortune on the campaign so far, is “a case of overkill,” according to the poll, with 61 percent saying so in July, and 56 percent saying so the previous month.

Photo from PolitickerNY
Posted by Queens Crapper at 1:52 AM

Campaign against the environmental waste the City could save by stopping his puff piece mailings.

Oh, he spends his own money to flood the City with his bullshit. And the Queens GOP..... bends over...

Direct your anger to QUEENSGOP@yahoo.com, It is a party without a principle, without an idea, but with a hope... to elect a candidate with a (R) name next to it.

So now the Mayor that ran as a Republican, then renounced being a Republican, is once again a Republican, even though he ignores Republicans, and ignores their events. And the incredibly stupid Queens Republican leadership think that, in the next decade, it might help their candidates.

So, exactly who is the genius we are supposed to vote for if not Mike? Some corrupt democrat? Some socialist or communist, or "peoples workers green family party" nonsense? When someone creditable steps forward, I'll listen.

And the incredibly stupid Queens Republican leadership think that, in the next decade, it might help their candidates.
--

Dont just knock the Queens Republicans, the leadership for the entire borough is pretty lame.

And I mean not only political, but media, cultural, on down.

The pols give money to the organizations that share their brain dead world view, the press eagerly reports the brain dead pols, and everyone else with a nugget of wits gives the whole thing a wide berth and focuses elsewhere or just moves.

Crappy had a hand in this, and thats with everyone else in Queens protesting in our boro's classic limp fashion by saying "I wouldnt vote for him" and doing little else.

Act Up People! and this self important straw man will go up in a burst of flames.

Really. He is quite brittle.

And shares nothing of the urban grittiness that oozes from every NY'ers soul.

I send his mailings back, marked "return to sender."

Can you really do that? Because I will too!!!

I seldom support the notion that one votes against a person. I seriously believe that's why Kerry lost to Bush. But in this case, I'll make an exception. I am a slightly right-of-center, registered Republican, fiscal conservative, social liberterian, who will be voting for Thompson in the general election. (I'd vote for Avella in the Dem. primary, only because he's from Queens, but I can't, and Avella will lose to Thompson).

This poll is further evidence that despite the millions of dollars Bloomberg is spending on his campaign, New Yorkers cannot be fooled. Rather than trying to buy votes, Bill Thompson is appealing to the millions of New Yorkers to support his candidacy for mayor of New York, as part of his massive grassroots campaign. Bill is the right candidate for mayor. He will be a mayor for ALL New Yorkers.

"More voters also say that Mr. Bloomberg, who has spent $36 million of his fortune on the campaign so far, is “a case of overkill, ..."

He may have spent $36 Million of his own incredibly corrupt vast fortune (he probably has spent a great deal more on purchasing the media), but, he has also been spending OUR money - heaps of it - through the taxpaid website: www.nyc.gov and RCN's "Access Mayor" where he appears every day for hours at length (boring even the camera).

Either RCN is giving a campaign contribution ("in kind"), or, WE are paying for this perpetual TV time.

So, get him off TV. Get him off the Internet. Get him the hell out of here!

Then vote for Tony Avella!

Vote for your own interests. Vote for Tony Avella!

H-m-m-m...
all those millions spent by Bloomberg just to maintain about a scant 20% lead in the polls...with Thompson spending next to nothing.

You'd better return your Ermine robe to Brooks Brothers Mayor Mike and tell your portrait painter to hold up on your emperor Napoleon-esque style tableaux.

Your feet's too big and you insist on forever putting them in your mouth.

You're gonna lose this election!