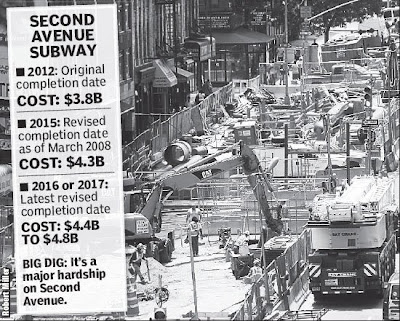 Thanks to bungling by the MTA and its contractors, the city's most crucial transit improvement -- designed to free Upper East Siders from the sardine-can-like rides on the Lexington Avenue line -- will be pushed back another one to two years, sources said.

Add this to our Mayor's asinine dream of a west side stadium, once the unions and con-tractors got done reaming us that one would have set us back -at least- $3bn. Not to mention the permanent blight of drunken sports fans and awful traffic.

Then we have his Honor's bid for the Traveling Bankruptcy Show -- aka The Olympics.

Projected cost of that rose from the original guesstimate of $4-5bn to $11 and counting...again once the vowel boys get their dibs...$18-22bn. Well your grand kids would certainly have something to remind them that NYC once hosted that party....every time they paid a tax surcharge.


Thankfully, most of Bloombag's big ones failed....but let's not push our luck.

This is a waste of money. let the middle class folks (300-500K range) walk from their lux river view apartments on the extreme East side.

Divert the money for this project to expand subway's reach in Queens instead. How extending the subway dow Union Turnpike, Hillside Ave, to Glendale or Astoria Blvd LGA!

Dismantle the MTA and start from scratch. Put in average people who actually take mass transit on the Executive Board. People that take mass transit understand the needs of the public and their trasportation issues.

...and they're not even close to done.

i blame the unions

what an embarrassment this city is becoming

Not only did the project start in the 70's without being finished, I would like to know why they tore down the original 3rd Avenue El in the first place! We had service there in grandma's time, but not today.

The EL'swere torn down so Laguardia could line his pockets with GM's $$$$$$$.

Who needs it anyway! Scrap it.

1. The first bond issue for this was 1952 and the money, raised, went elsewhere. And this happened again and again.

2. The 2nd and 3rd Ave els were torn down for developers to convert Yorkville into the Uppa East Side. It might have ruined commuting, but hell, someone made lots of money.

3. They are still building on the ES only now people cannot fit on the trains and have to wait and wait ... (look out Hunters Point and Ditmars)

4. Its a matter of emergency - one terrorist can shut down the Lex, where 40% of NY takes each day, and its choas even if its for a few weeks.

I hope this means that the tenants who were slated to be displaced can stay in their homes now.

It was mentioned previously that the elevated lines in Manhattan were dismantled before they could be replaced. Why not build another one down Second ave. instead of a tunnel that will take years?