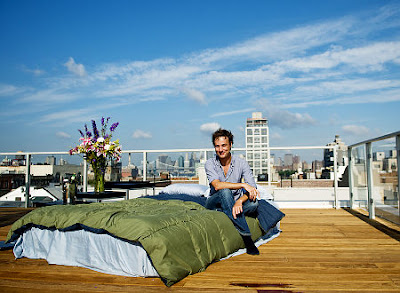 Just my luck. It rained buckets on the night I decided to sleep on the rooftop at Hotel Toshi in Williamsburg.

Luckily, the hotel had put up a tent.

"It only keeps out some of the rain," said Robert (Toshi) Chan, founder of Hotel Toshi, who rents the roof of his South Eighth St. building for $100 a night.

That's for sure. The tent was bigger than an average hotel bedroom, but leaky. Water seeped in around the corners where the tent met the wooden deck. Still, it stayed pretty dry inside.

Chan is one of hundreds of New Yorkers, and others across the country, trying to make a few bucks by using a San Francisco-based Web site called AirBnB.com to sublet odd spaces such as couches, boats, cabins and even rooftops.

He said a Web site developer from Maine slept on the roof for six weeks last summer while looking for a job.

AirBnB's biggest market is New York, Blecharczyk said. The site has some 800 listings in the city, with as many as 50 new ones put up each week.

What fantastic reporting! I look forward to the follow up detailing the numerous violations of city building, zoning and fire codes, the evasion of taxes, the interview with neighborhood residents about transients coming and going all the time and the Bloomberg administration's response. Maybe the reporter will stay at the Hotel Queen next!

Miss Heather found a few of her own.
Posted by Queens Crapper at 12:08 AM

Labels: Brooklyn, How not to publish a newspaper, illegal hotels

Talk about pricing through the roof. If I have space in my backyard, can I put up tents and charge strangers too--black widow spiders live rent- free.

Too much regulation. Why can't someone allow guests into their home for a sleepover? (and make money, too)

Yeah, what's wrong with a little tax evasion and C of O violations?

SO WHAT????? My House - MY Rules! Why can't I charge people to stay over?? Some places on that specific site look way better than some of the roach hotels/motels in NYC and charge MUCH less. Why can't the average Joe Shmoe make a buck as well??

Because your neighbors don't want their peace and quiet and property values destroyed so you can make a buck.

If you want to go into the hotel business, get licensed to operate one and open one up.

No one needs your amateur whorehouse, your drug den, your 24-hour a day party scene, and there are laws on the books such as the bawdy house statues and drug forfeiture laws that will quickly find you out on the street or in Riker's Island while the government auctions off your house.

No one needs your amateur whorehouse, your drug den, your 24-hour a day party scene, and there are laws on the books such as the bawdy house statues and drug forfeiture laws that will quickly find you out on the street or in Riker's Island while the government auctions off your house.
--

Unless you are an immigrant, then the police will look the other way.