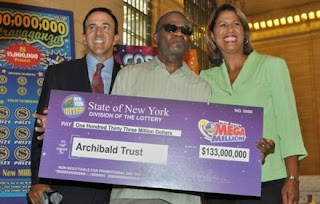 One Kew Gardens man had a whole ‘lotto’ luck on his side as he came forward as the winner of the $133 million winner of the July 7, Mega Millions jackpot.

“I was in deep shock; I couldn’t believe I was the winner,” said Boyce, who spoke softly at a news conference that took place at Grand Central station on Tuesday, July 28.

On the morning of July 7, Boyce purchased $2 in Quick Pick numbers from the Shiv Convenience story on Hillside Avenue in Jamaica. Later that night, he watched the drawing on TV, and he remembered seeing some of the numbers on one of his tickets. He checked it again, and he told his wife Francis that he had the winning ticket.

“She thought I was joking,” Boyce said.

Apparently, earlier reports that the winner was female were incorrect.
Posted by Queens Crapper at 10:41 PM

The man can't even smile???

I want to win so I can meet YoLANDa Vega!

I'm sure that money will be going within 3 years.

If I won this big amount of dough, I wouldn't consent to have my photo taken.

It's hideous, that you are made to stand there for a BS photo op and interview. I wouldn't smile either.