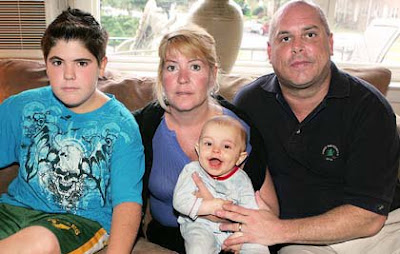 In a statement issued Tuesday, Carrozza said she plans to run again for her seat.

“I have every intention of running for re-election and look forward to continuing to deliver results for our community,” she said. “I’m not the kind of person who takes this job lightly. Unfortunately, over the past year a difficult personal circumstance involving the care of a loved one prevented me from being in Albany for several session days, but I have worked hard to continue to fight for my constituents and expect to be able to have excellent attendance again next year.”

Vincent Nicolosi Jr. said he, his wife and their three children rent an apartment from Carrozza at 202nd Street and 35th Avenue in Bayside. In late June, the couple received a 30-day notice to vacate the apartment.

“They never gave us a heads-up,” said Nicolosi, who is son of former state Assemblyman Vincent Nicolosi.

“I’m not going to be homeless with three kids.”
Nicolosi said he and his wife have been looking for another apartment, but both of them work full-time.

“Right after [Carrozza] said she was moving back to the district, we were served with a 30-day notice,” Nicolosi said. “So, put two and two together. She should have given us advance notice.”
Posted by Queens Crapper at 1:44 AM

I have been in the same situation. Madman Monserrate was in cahoots with landlord to toss me to the curb to liberate my stabilized apartment.

Let Carrozza crash with Bayside family and friends for a few weeks the way I did when the ceiling was collapsed on my head.

In the meantime, give them proper notice. The good news is that there are plenty of new vacant buildings available if they can pay the blood-sucking cost.

She did give you notice - 30 days which is all the law requires.

Not to worry. Although a "heads up" would have been nice, in our wonderful court system the 30 day notice is the first step in a long eviction process. It's been my experience as a property manager over the years that the courts are tenant friendly. If you so desire you could probably spent the holidays in this apartment and move out sometime next near. I don't think a 30 day notice qualifies as being tossed in the street. This article smells like "politics as usual"

How sad for this family. She should have offered her Glen head mansion as a temporary home for this family, so she could pretend to live in the Bayside apartment for as long as reporters are sniffing around.

That depends if they had a month to month or year long lease.

if a Republican can't bet her in the general election, after all this, there's no hope for the tweeded. you get what you vote for.

if a Republican can't bet her in the general election, after all this, there's no hope for the tweeded. you get what you vote for.

Remember she specializes in senior stuff, and in Queens the seniors have an influence far in excess of their numbers.

Thats what happens when you push out the middle class and young families and replace them with a transient population that for the most part doesnt care - be they Tower People or immigrants who all on to a brighter future and greener pastures than the sorry assed dump that Queens has become.

All that is left is the residue that cant go and are stuck here.

Coupled with pandering press run by Vicky or Gery this woman is a shoo-in.

What Glen head mansion ?
I know the house its no mansion, my friend Kathleen's parents live next door to them in GH.
The property's are big due to the 1 house per .5 to 1 acre zoning in GH

Tenant friendly - you must be joking! As a tenant's attorney for more than 25 years I can assure you that the Queens Housing Court is not tenant friendly.

in june 2009 ,19 trees,benches and a gazebo at third base,destroyed the ball playing future for local kids at the p.s.159 q playground in bayside.carrozza lived in this area.could she have played a role in this evil deed before she skipped town? the "playground" had been locked24/7 for years.why? all other local public space is open daily for toddlers & teens.who kept this public space from the community for years? For photo see: Queens Croniicle,7/2/09 or Queens Tribune 6?18/09: P.S.159 playground gets a mayoral facelift",BLACKTOP BLUES BUBBLE UP IN BAYSIDE'----JUMPSHOT'

You don't think that's a mansion? Then you must live in a palace.
Carrozza's house is beautiful. It would kill me to live in some tiny co-op when I have a home like that. That's the kind of house I always wished I had.

Considering that the Nicolosis are friends of the Carrozzas, a 30-day notice is pretty mean.

If the Queens Democratic machine endorses Carrozza, it is proof-positive that they don't care about serving the people. The Republicans need to come up with a candidate. What ever happened to Doug Prescott, who I think had that job before Ann-Margaret?

Put her in Jail

I live in a palace ?
Lol.
Summers I live in a barn or 19 foot boat depening on the weather. I rent my houses.

You can have a decent house also. You should loose that crappy 40k babysitting job before one of those brats shank you. There is no future in it anyway. I know waitress and strippers that make over double that part time cash.

Ok Joe, I think I got you figured out. You're like so many typical old-time Italians. You own a bunch of properties and rent them all out while you live like a dog.
Come on Joe, live a little!

And BTW I have a decent house! Not as big as Carrozza's but I'm happy there.

I think I make a little more than that. And it's not a babysitting job!!! Are suggesting I become a stripper??? Oh Joe, say it ain't so!

Now shes (her way) of calling me a dog !

Naaa I have an office, small recording studio in the garage to do my other job. Kitchen, LCD TV, Computer, Sofa. its nice, the boat is even nicer

I get up around 9AM make coffee, vacume the pool, feed my chickens, goats then check my tomato plants/tie if needed, check the other plants, trees. By noon I go to the Nassau Point beach till 3 relax then get dressed to play in the band at the N Fork wine joints. When off I have sunset coctail partys. Then send move down to the "Busted Down Valise' or Old Mill when it gets to loud.

I remember you said something about working for Hooters. Hmmmm you coud post a pic and let the bloggers decide

I'm NOT calling you a dog! You just live like one. hahaha

What's with all the farming sh#@? You would fit in soooooo well in Sicily. The old-timers love that crap. You could grow figs too and lemons!

I already grow figs, 20 trees of them. Corn, peaches, grapes, peppers, melons, sweet basel, Jacko-lantern too. Its hard work specially in the fall when you have to cover all those trees. I do it all myself plus pay my parents taxes and bills in Manhasset.

I make 3 different wines as well, even draw my own lables.
-Joe

---- JEEZ I wonder how many boyfriends or husbands this princess chick has aggrivated to death.

Well the first guy I aggravated was my dad. And if you'd ask him today he'll still tell you I'm a pain in his ass. lol

Boyfriends?
Oh, there's been a few. But in my defense and this is the absolute truth, not one of my ex's ever broke up with me. It was always me doing the breaking up. So how bad could I have been?

And after a number of years, my husband still loves being aggravated by me.

I must be doing something right. Don't you think?


Oh and I'm not a princess. I'm actually quite normal.

Buongiorno Principessa :)
There is only one of 2 explinations my dear

1- You married your psychiatrist

2-You married your Pharmacist.

----The poor dude must be prescribing his own medication.

My dad calls me principessa!!

Both of your explanations are off the mark. I married my college sweetheart.

And no, no meds involved.

Come on Joe, I'm not that annoying! I'm actually quite adorable.

The poor family that got tossed into the street sure learned the ropes...now they didn't pay rent for 7 months ...and are really being evicted Is this becoming a Nicolosi trend??? Anonymous..read the transcript..see how big dad Esq
Vincent said he'd help pay...never came thru..and they want another assemblyman up there...Pat Nicolosi???? Help we're really in trouble.