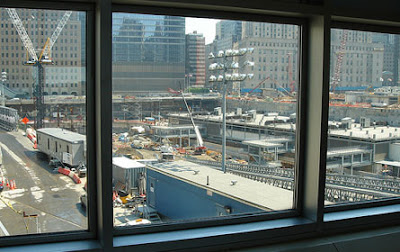 Only two towers? Are we looking at an historic repeat of the original Twin Towers? And the new buildings, with anti-terrorist design features including monstrous bases encased in steel and titanium, will make the pre-9/11 versions look like pastoral wonders.

With the rest of the master plan for the site postponed indefinitely, the towers could again be surrounded by vast empty spaces or, at best, a couple of lonely memorial sites and a small cultural center. And the office buildings could have lots of empty space. The original Twin Towers, which opened in 1973, had so many vacancies that public offices were brought in to fill them up. No wonder the Port Authority doesn’t want to subsidize Silverstein up front.

So after eight years of wrangling over exactly how to dump the office space back on the site, this may be a good time to stop and go back to the drawing board. Maybe the critics were right in the first place. Perhaps it would be better to look at the site as an opportunity to express the diversity of interests and needs of New Yorkers. Since most victims of the attacks were not New Yorkers and 9/11 had repercussions far beyond Ground Zero, the focus might appropriately move beyond those who happen to own the land. Maybe New York could learn from the leading examples of rebuilding on sites destroyed during war, like Hiroshima, Japan – a city that dedicated its plan to the cause of global peace and is today a destination for visitors from around the world.

The original World Trade Center: utilized eminent domain abuse, destroyed a truly vibrant section of the city and ultimately was so unsuccessful that it required a developer bailout.

Now history is about to repeat itself in other areas of the City. Why haven't we learned?
Posted by Queens Crapper at 12:12 AM

Ironically enough too, it was built over an Arabic neighborhood too--bad karma.

I'd love to see a 2,001' spire -- a slender needle along the lines of Bill Pedersen's design. At 1,776' let's have a chapel and place for meditation that welcomes all faiths and people of no faith. It would be an amazing rebuttal to Osama bin Laden's brand of intolerance. Physically, a taller, graceful structure would be far less expensive, pay for itself through television transmissions, and not cast oppressive shadows. This design would also leave more space for a living streetscape and green parks below.