Vallone got campaign contributions from WM

[Kevin] Kim has raised $233,102 and spent $161,848 in the race, according to city Campaign Finance Board figures. [Paul] Vallone, son of former Council Speaker Peter Vallone and brother of Councilman Peter Vallone Jr. (D-Astoria), has raised the second-highest amount in the race with $135,526 and spent $88,795.

Vallone’s contributions were a mixture of large and small donations.

Wow, a $3000 campaign contribution from Waste Management on top of $1M in lobbying fees to get them an unnecessary truck contract with the City. Amazing! 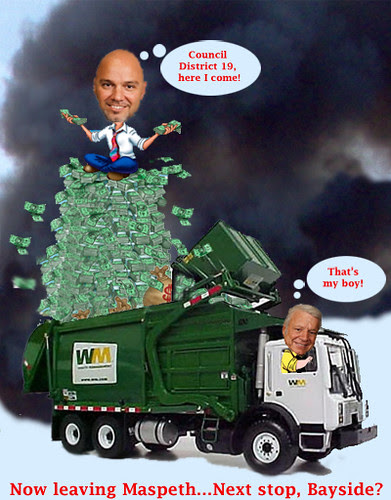 Posted by Queens Crapper at 1:57 AM

Hey he apparently doesn't even have to represent your area to screw you, though. So sit tight!

This guy is really starting to scare the crap out of me.

Does this mean CB7 will now be for sale to the highest bidder? Oh wait, I forgot, CB7 already is for sale. I guess that now it's just a matter of price.

Chuck Apelian was at Councilman Avella's rally yesterday cursing Steve Behar under his breath when he said to take note of which candidates failed to attend the press conference about relocating Willets Point businesses to the College Point Corporate Park.

Please leave Vallone Senior alone. He goes to Mass everyday. He receives communion, kneels in the pew, and makes the sign of the cross.

Does this mean CB7 will now be for sale to the highest bidder? Oh wait, I forgot, CB7 already is for sale. I guess that now it's just a matter of price.
--

Remember this the next time you turn your nose up at CB1 in Astoria.

What happens in Astoria today will be in your backyard tomorrow.

Go there. Walk around.

Go back to Bayside.

THAT IS EXACTLY WHAT HE WANTS. GET RID OF THE MIDDLE CLASS QUALITY OF LIFE WHINERS.

FILL UP YOUR HOUSE WITH TWEEDED.

What the hell is wrong with you all? If your community is important to you, you will make an effort to fight for it.

Ask Paul about his finances. Ask him about how Astoria is going to the dogs.

Do this in public in front of the press.

Have the camera rolling and share it with Crappie.

How did he come off crazy? He called the mayor out on his hypocrisy and he supported the residents who said there would be too much traffic with both the 5 businesses being relocated to the College Point Corporate Park and the police academy being built there. Add the additional trucks to and from the Sanitation MTS and it will pretty much be a god damned nightmare.

THE ONLY SANE PERSON IN AN ASYLUM WILL NOT BE 'NORMAL' TOO.

THIS IS THE OLD SAW THEY TELL US ABOUT HIM, HE CANNOT 'PLAY' WELL.

THESE PEOPLE THAT RUN OUR CITY HAVE DRIFTED SO FAR OFF PLUMB THAT THEY ARE WARPED.

IF YOU WANT SOMEONE WHO SET UP THE RULES, ASK VALLONE. WALK AROUND THEIR NABE IF YOU WANT TO SEE WHAT THE RULES DO TO A COMMUNITY.

Paul Vallone aint winning anything. He is a bozo. That family has never won a race. The old man lost 3 (three, three, three !!!!!!!!!) times he tried for highter office (Governor, Mayor and Congrtess) spanning twenty years. The brother couldnt break 50 percent of the vote against some nobodies and 100 percent of the voters thought they were voting for the old man. Baldie Paulie is gtoing to go back to keeping the secretaries busy at Vallone and Vsallone while the old man funds the kids mortgages.

If you don't want him, join one of the other campaigns and help make sure he doesn't get elected.. don't sit back and bitch and not do anything! Get active and help bring the change you want!

What's in it for Kelty, Apelian and Joyce to support Vallone? How did that all come about?


And you'll be appalled!

"What's in it for Kelty, Apelian and Joyce to support Vallone? How did that all come about?"

or the fact that Iannece has also received contributions from developers himself. But yet everyone only points out Vallone. Behar and Markell are clearly weak and unfit candidates for a city council member. Iannece can't speak about anything but how he has virtually done everything one can do for Northeast Queens.... right... However, everyone consistently Bashes Paul Vallone and the Vallone family. That family did more for this this community than any of the other clowns running for seat.

Just take a look at what Paul Vallone has done for Maspeth and you can get a good idea of what he'll do for Bayside!

That's right, he won't shit in his backyard (Astoria), but he'll certainly dump his load elsewhere.