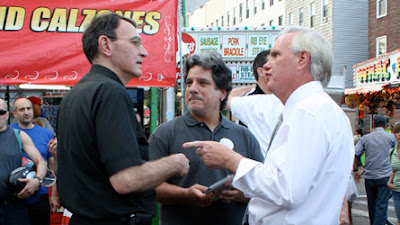 Located on the middle floor of a storage facility that's practically on top of the Brooklyn Queens Expressway, it's an elusive setting to kick off a run for the city's top office.

When I visited last week, the Prince Street sign teetered on its hinges, the Q train crossing the Manhattan Bridge rumbled in the distance and a likely homeless man marched in the vacant lot next door, dragging a large wooden stick. Just flights up inside, a quote from Mahatma Gandhi hung in one room, a bubble-lettered campaign schedule in the other. Another hand-written poster read: "Viva Avella."

Earlier this month in Williamsburg at the Italian Festa del Giglio, the candidate weaved through the crowds, undaunted by the smell of cannolis and the sausage and peppers sizzling.

While making his way through, Avella turned to his campaign confidant, Phil DePaolo. "You know my crowd," he said with a smile.

"That's why I wanted you to come," DePaolo, president of the New York Community Council, replied.

Just a half hour before, Avella had been attempting (emphasis on attempting) to court the voters of Williamsburg disembarking from the Bedford Avenue subway stop. Note: The young and hipster laden population seemed far more interested in getting to the local watering hole than shaking Avella's hand.

If there are any areas that Avella will be able to carry come this fall's primary, it's the ethnic enclaves, said one city political consultant. They won't carry him into the general election, Mercurio says, but Avella might be able to win the votes of New Yorkers who, whether they want to admit it or not, would not vote for a black candidate, like Thompson.

Wow, the Citizens Union is entertaining the suggestion that "ethnic enclaves" won't vote for a black candidate (Besides, did they forget that some of the largest ethnic enclaves in the city are black or Hispanic)? Why would CU infer that Tony Avella only feels comfortable around Italians? Why would Dick Dadey's group allow unchallenged the notion that most of Avella's voters won't make an informed vote for him?

Well, it turns out ol' Dick has got a long history as a gay activist and is Christine Quinn's buddy from way back. Despite now heading a "good government" group, he has never truly criticized Chris (or the mayor) and he never will. He was eerily quiet when she hired an expensive lawyer with taxpayer money during the breaking of the slush fund scandal and didn't exactly respond vociferously when term limits were extended. But when she wants help getting revenge on people she doesn't like, she knows exactly who to call!

Just so you guys know the real story.

Quote: “Citizens Union has been pleased to work over the past couple of years with reform-minded individuals like Mayor Bloomberg and Speaker Christine Quinn,” Dadey said.

If you can't count on good government groups to look out for your interests, then who can you trust? Looks like only Tony Avella...

The Village Voice wrote something funny:

Some council colleagues call Avella "crazy" because "he is apparently the only one who has returned his parking placard," which is totally nuts; also, "he often acts, they say, as if he is the smartest person in the room," which, if you've looked at the city council, actually seems a reasonable assumption.
Posted by Queens Crapper at 12:31 AM

I like Avella somewhat and will vote for him but I am being honest.

The Citizens Union along with groups such as Acorn, etc. has become a sham...doing the bidding of "the man"!

I really think all the ass kissing incumbents and their henchmen are scared that Avella might be the long shot that comes in and pays off big time.

Why else would they be mudslinging so heartily if he weren't a serious threat to the shameful status quo?

And the obvious blackout by the mainstream media won't prevent the word of mouth that's already circulating most effectively among NYC's civic associations from recognizing the fact that Tony is the one reform candidate out there capable of turning around the corruption and waste that plagues our city under the current administration's heavy handed rule.

Dick Dadey is the biggest crook in NYC. He is a disgusting animal who steals tax payer dollars.

1) Maybe he should tell everyone how much money he makes ? Or is he not held to the same standard as elected offcials.

2) Maybe he should tell the public a single thing he has accomplished other than filling his p[ockets with real estate developers money.

3) Maybe he should explain why he honots lobbysists at his gala dinners (Peter vallone Sr., Peter Powers) but then claims he is anti lobbyists.

What a disgusting hack.

I can't believe they still have the street fair. It's so poorly run, I wouldn't anyone's child on those death rides. Avella should go to a fair where he wouldn't blend in , maybe one in Jackson Heights, Harlem, etc....that's the true test.

Have faith!!! Believe and spread the word!! Negativity will accomplish nothing.

Avella's "boat" is far from shrinking now that the truth is coming out about Thompson regarding his poor history as president of the Board of Ed and his selling his soul to the real estate industry, accepting donations of more then $100,000 from the big names; also accepting large donations from the investment firms that manage the city's pension fund, making more then 5M last year.

I am very excited about Tony's candidacy.

If you are too - please come to a fund raiser for him next Wednesday in the East Village at 7PM.

See the announcement on the Avella web site. www.tonyavellaformayor.com

And wait until the debates. They should be very interesting!

The Gay community has been one big disappointment.

After being in the wilderness they seem to have adopted being the shock troops of the machine.

Articulate. Well educated. Above income. They could have done wonders helping the disenfranchised. They know what its like getting the shaft (pun not intended)

But no, once under the tent, its payback time to the broader society.

Well, you know what? I still think its perversion guys (and gals, or whatever)

Where do you stop? Other species? Other age groups?

What does acceptance mean for me except trying to explain to my kids perversion? I have enough trying to raise them after what Hollywood has done - you know - 'whore' is now 'gal pal' and 'bastard' is now 'luv child.'

The Citizens Union along with groups such as Acorn, etc. has become a sham...doing the bidding of "the man"!
--

How about New Yorkers for Parks, another sham (IMHO) that has a board full of developers and are now looking to use cemetaries as parks.

Or the Metropolitan Waterfront Alliance, another developer controlled body that seeks housing on the wasterfront (and large blocks controlled by developers) that will cut off communities.