A hell of a hole in East Elmhurst 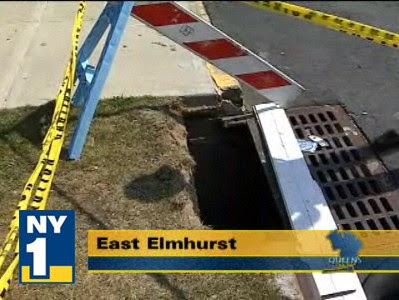 East Elmhurst building owner Mike Shehadeh was worried about a huge hole by a street drain that grew bigger by the day, and the danger it posed to his Queens neighborhood.

Shehadeh was also concerned for the five little kids who live in his building, right behind the hole. He said the drain had been around for three months and he had called 311 about the hazard at least a dozen times.

After Shehadeh called NY1 For You, the station called the Department of Environmental Protection and a spokesman told NY1 that the agency was aware of the problem and that the catch basin was missing a couple of pieces.

The next day the hole was fixed, much to the resident's delight.

Hey folks, it's an election year!
Posted by Queens Crapper at 1:47 AM

We have one just like it in front of our house. The city filled it with packed dirt.

Queenss Blvd is littered with these. some for over 2 years. DEP claims they are backlogged.

nothing happens until they city is shamed into doing the work or until the problem has been documented to the point that a lawsuit would be a slam dunk after somebody gets hurt.

the borough needs some serious infrastructure upgrades before all Bloomy's new residnents arrive.

is this a dog and pony show to profile a caring builder and the city ready to respond?

i thought all there were interested in are sidewalks and trees around NEW development.

our funds helping a campaign donor (i mean developer) make money by selling their property.

If you call this in as a sink hole, the DEP has up to 7-14 days to respond. If it is called in as a missing sewer, cap, or drain, they have to respond within 3 hours and is concidered an emergency. Chose your wording wisely.