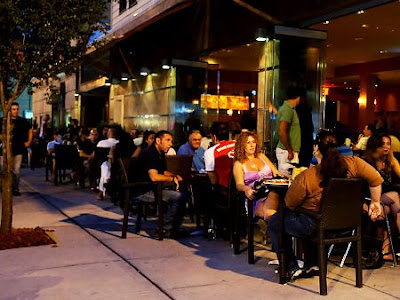 Astoria's ever-growing popularity as a hot spot for outdoor cafes, restaurants, bars and trendy clubs may be a boon for business owners.

But the constant flow of cars and chatter from the street is giving the locals some headaches, making it the top neighborhood for noise complaints in the borough this year.

"We hear drunken brawls and people yelling at 2 and 3 in the morning," said Donnie Marks, a longtime resident who lives near the busy 30th Ave. commercial strip. "Cars speed down the street burning rubber."

During the first six months of the year, noise in Community Board 1, which includes Astoria and parts of Long Island City, sparked more than 3,400 complaints to the city's 311 line.

The majority of those calls came from people complaining about loud neighbors.

Not surprisingly, Greenpoint and Williamsburg also had a plethora of noise complaints.
Posted by Queens Crapper at 12:25 AM

Why does most of rest of the World have outdoor cafes and no no drunk and rowdy people problems? Perhaps we should take time to look at ourselves.

It has a lot to do with the zero-tollerence, "stay away from drinking! its evil!!!!!!" that we preach to our kids for their entire lives.

The forbidden fruit, finally tasted, becomes too much to resist.


In the time i spent living in Europe, it was no shock to see a child, even still in a booster seat, be given a glass of (watered down) wine.

By making it a part of life, and that is no big deal, the desire to binge later on is simply not there.


Most places, its legal to drink in the streets. However, it is almost never done, aside from the occasional football hooligan. Its just tacky.

Also they don't drink on an empty stomach.

When I visited Greece for a couple of months many, many Greeks asked me two questions about us.

The answer to both is: Because there's too many f*&king Greeks in Astoria!

The problem goes a bit further and is unique to Astoria as a result of poor planning that is going from bad to worse in that community.

1. Bars were on commercial districts - now they are thrown everywhere. What used to be quiet streets are now littered with urine/bottles/condoms and marred with noise. Commercial establishments are creeping down side streets.

2. Many of the people in the cafes do not live in Astoria, but show up at 11 and raise hell till 4. They don’t' care about the community.

3. The police have a policy of keeping down stats to make the local leadership look good (Vallone is the head of public safety). You can have the Mexicans run a mariachi band in your airshaft and no one will stop it. You can call 311 to add to statistics but nothing works like the NYPD showing up and shutting them down. Now!

4. Hookah places and Brazilian parties run in backyards of cafes never intended for such activity. So what if the back yard of every property is affected? We have to be sensitive to their cultural mores be it smoke or noise? You don’t like it, move. Someone who will do the same thing and not complain will quickly fill your apartment. Look at a place like Corona, very noisy but no complaints because the people that live there like Vibrant! Diverse! blah blah and see no problem.

What you are saying about Astoria stings but has the ring of truth to it.

The same tired faces are calling the shots in Astoria, and every year there are fewer of them, they are older, and they are greedier (only interested in extracting as much as they can from each sq foot damn the consequence.)

The middle class is moving out. Disagreement with the way things are being handled by these people are ignored by the officials, the press, the community board, and even the local blog (which makes a joke out of things like this.

The machine hates quality of life issues, and likes the tweeded to move in. Remember, they have houses outside the district so what do they care.

Go to a community board meeting and watch what happens when a local person complains about a café taking over public space with tables and chairs and patrons who fill the night with noise.

The café will have one or two local merchants (fellow Greeks) say that everything is fine. The issue is ignored and more sidewalk tables are granted.

Air conditioning the sidewalk with open walls is a nice touch in a community with a shaky power grid.

Café after café have with the same format (down to the same crockery) and open and close with numbing regularity. Most are themed – Arab, Croatian, Greek, etc.

Norwood Gardens, because they have not reached out to the surrounding community, is an island that will be overwhelmed.

Look how much space they have in that picture between the Nassau Greek and the tree.

go back to where you came from and leave astoria alone.

doesn't anyone have a sense of humor anymore? I left Astoria because of the noise and the traffic. and I took my greek wife w/ me.

You were taken serouisly because there so many real bigots posting on blogs. Add LOL next time cause we all do need a laugh.