Dilapidation and trepidation in Park Slope 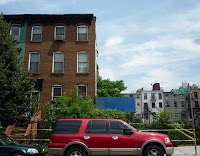 The building's owner, who, according to neighbors, hasn't been seen for a couple years, has been served with a bunch of violations. One of the more recent ones says the following: "Failure to maintain observed: front brick facade pulling away from side wall with vertical crack app. 20' high with gaps from 3/8" to 1 1/2"." The DOB says they're evaluating their options for the building, which may very well include demolition.

And while we're in Park Slope, a developer who wants to overbuild is going to the BSA claiming a hardship because, as the Daily News puts it:

Verma said the additional buildings are necessary to recoup the money he lost when the discovery of a Con Ed substation buried under the site "just blew the budget out by a huge multiple."

How do you buy property without knowing what's in the ground?
Posted by Queens Crapper at 1:35 AM

By the same reasoning these parasites use when buying a building with regulated tenants, then claiming hardship when they are hauled-up by the media for trying to harass them out.

It says -alot- about what has become of real estate supervision under successive republican administrations.

Lino got that right.

The city exists only for the tweeded and developers - always ready to help them out.

No need to think on their part.