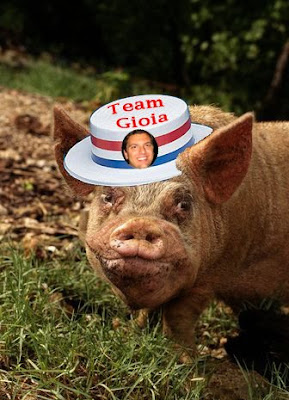 When public advocate candidate Bill de Blasio was kicked off the ballot Thursday for a typo in his petition filings, his rivals offered their sympathy.

But one of them - City Councilman Eric Gioia of Queens - jumped on the phone that night looking for endorsements from the Brooklyn councilman's supporters.

One union official who got a late-night call from the eager Gioia wasn't impressed.

"It was over-the-top inappropriate," he said.

De Blasio is fighting his ballot boot, caused by a mistake on the cover sheet of his petitions. Three other candidates - Democrats Mark Green and Norman Siegel and Republican Alex Zablocki - have said a technicality shouldn't knock de Blasio out.

Gioia agreed - but that didn't stop him or his staff from near-instantly trolling for support from de Blasio backers.

"I was stunned, frankly - it was so brazen," the union official said.
Posted by Queens Crapper at 1:09 AM

pettifog
–verb (used without object), -fogged, -fogging.
1. to bicker or quibble over trifles or unimportant matters.
2. to carry on a petty, shifty, or unethical law business.
3. to practice chicanery of any sort.

pet·ti·fog·ger
1. A petty, quibbling, unscrupulous lawyer.
2. One who quibbles over trivia.

That's all these campaign rules are - pettifoggery. And, 99% of these cheesy rules cannot be justified except to eliminate all competition. That elimination directly affects the voters by preventing us from choosing the best among contenders. Instead, we get the most unscrupulous of the dregs.

These rules, and these challengers are deliberately interfering with your right to vote.

You can fix that. Vote out anyone who introduces a challenge to the petitions of a competitor.

"Vote out anyone who introduces a challenge to the petitions of a competitor."

How do we know who initiated the challenges? Is that information publicized anywhere? If not, then it should be.

All of Gioia's efforts have gone for naught, and he has only succeeded in alienating people.

De Blasio is back on the ballot.

Eric Gioia - What a Pig! Dump him like yesterday's garbage. That's what he is. Useless politician.