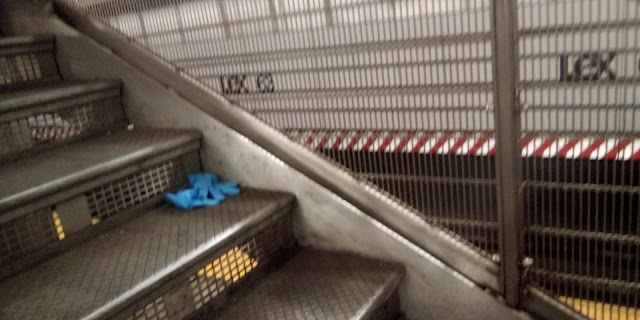 
Preparations for a pandemic have been taking shape for years at New York City Transit, with the agency outlining plans to protect workers and riders while stockpiling supplies.

But as the coronavirus crisis escalates — with seven MTA employees among those to die from COVID-19 — transit union leaders say workers are deeply concerned over a shortage of protective equipment.

“It looks good on paper, but in a lot of cases, it’s not happening — I have no wipes, I can’t get N95 masks and it’s crazy,” said JP Patafio, a vice president for TWU Local 100. “What good is a plan if you’re not going to take stuff off the shelf when you need it?”
THE CITY obtained a 2012 copy of New York City Transit’s pandemic plan to “prevent or minimize illness among employees,” to limit service disruptions and maintain “an environment that is safe for both our employees and our customers.”

But a former MTA chief safety officer said the plan — similar to ones transit agencies across the country put in place after the 2009 swine flu pandemic — assumed a “rapid national response.”

“These plans don’t contemplate, nor were they required to contemplate, a sustained nationwide response with the associated shortages of supplies that we are currently seeing,” said David Mayer, the MTA’s chief safety officer from December 2014 to June 2018. “I don’t think these plans expected the level of service cuts, nor the duration of response that we are experiencing.”

The “Pandemic Plan Policy Instruction” maps out the need for subway and bus service reductions due to rising absenteeism, instructs transit workers to limit face-to-face contact with the public and not shake hands.

The MTA confirmed Monday that five more employees have died due to complications from COVID-19.

The employees were identified as Scott Elijah, a 15-year track worker with the Combined Action/Emergency Response Unit based in Long Island City; Caridad Santiago,a cleaner for 13 years assigned to the Stations Department in the Bronx; Ernesto Hernandez, a bus operator for 15 years most recently working out of the Jackie Gleason Bus Depot; Victor Zapana, a supervisor in the Stations Department who worked from various locations throughout the subway system for almost 30 years; and Warren Tucker, a bus mechanic for almost five years at the MTA Bus Company, assigned this year to the Central Maintenance Facility in East New York.

“We are heartbroken at the passing of five heroic members of the New York City Transit family. Scott, Caridad, Ernesto, Victor and Warren were all inspiring and valued colleagues, well-loved and well-respected by their co-workers," Feinberg and Acting MTA Bus Company President Craig Cipriano said in a joint statement. "They dedicated their lives to serving the public and keeping New Yorkers moving. This is a tragic loss for the city. Their families and friends are in our prayers during this incredibly difficult and painful time.”

Last week, two transit workers passed away due to coronavirus and a third died trying to evacuate a train that was on fire in Harlem.

I like that - every plan in this city is cleverly designed to look good on paper, and pass the buck to Washington in case things blow up. The locals we will do silly things with basement dwellers and homeless that would not be unlike leaving piles of combustibles in a forest.

So when the inevitable lighting strikes, they can all smile and turn in unison to DC with hands out. Shame that presidents, unlike local pols, have brief term limits. Boy did that scheme blow up. Now all of us have to pay.

Great. Lets borrow a page from their playbook. So lets all of us, when the bills come in, demand a hand out from all of our local office holders. If they can't we can find someone who will. We can play the game, too!

What is the MTA actually prepared for ?

Anon one is right on

NYC has been target number one since 9-11. Yet all the money and masks go out the back door.

"Yet all the money and masks go out the back door."
And we the hard working tax payer take it in the rear door !