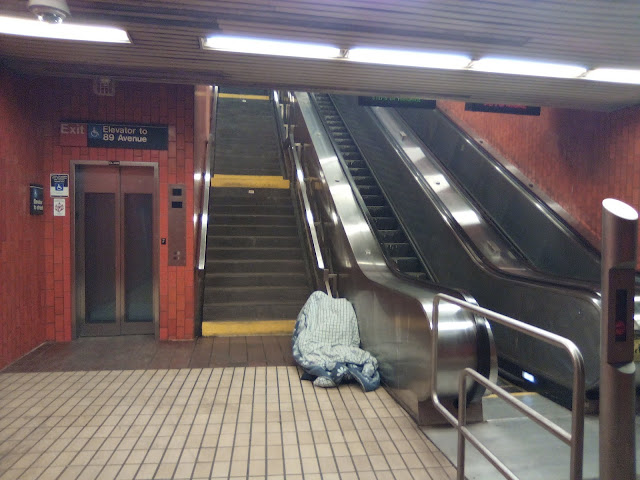 City hospitals are sending apparently homeless people who test positive for coronavirus but aren’t in need of intensive medical care to the shelter system for isolation, THE CITY has learned.

Meanwhile, the number of homeless people with coronavirus infections living in city shelters more than doubled over the weekend as social services officials grappled with how to handle the growing number of cases affecting some of the most vulnerable New Yorkers.

The Department of Homeless Services confirmed Monday that the number of shelter residents with COVID-19, the disease caused by the virus, jumped from seven on Friday to 17 by Sunday night. That’s a major increase from 10 days ago when only one shelter resident had registered a positive test.

Homeless people with the virus have now been found in 12 shelters across the city, DHS said.


Now the city-run hospital system is transferring patients who’ve tested positive for the virus into the shelter system if the person has no known address and isn’t deemed to require acute medical care.

As of Sunday, one such patient had been sent to the city homeless shelter system. Isaac McGinn, a DHS spokesperson, said the person only needed isolation.

Four of the 17 shelter residents with COVID-19 remained hospitalized, while the other 13 were “only exhibiting mild illness and do not require intensive hospital care at this time,” McGinn said.

Most of those with the lower-level symptoms were taking up beds in an isolation ward DHS has set up at an unspecified location, he said.

A bit overdue, there's no people more likely to be exposed and also spread it themselves. Should probably make shelters along with whatever temporary hospitals and everything else.

Wait till it hits the basements and dormitories of Queens. All those places the liberals fought to keep in our communities.

That population (who BTW are delivering our food and are hired to 'clean' our buildings) is about to explode. Off the charts.

I agree, there should be a calculation for including the massive NYC homeless population within the official calculations.
The homeless crisis being a product of the failed policies of both Cuomo and mostly Deblasio turning this state into a "sanctuary" borderless city and lowering the standard for "right to housing" applications.
This pandemic unfortunately, has the potential to amplify the third world status of our city and its years of mismanagement for the sake of political pandering.

That being said, the pandemic and the ongoing crap-ification of our city are two separate issues.

Today's numbers from the state: 25,665 cases with 210 deaths indicate a Case Mortality Rate of approximately 0.8%.
That's a lot lower than was sold to the public early on. I will also add that I said it would continue to lower in previous posts.
The number of deaths due to this epidemic is much, much lower than seasonal flu which has killed between 23,000 and 39,000 Americans this year alone.
Yet nobody is destroying the entire American economy over those 23,000-39,000 deaths?

I've read the CDC pages. What you should remember is that these are initial estimates which almost always get revised much lower over the next two years as better data are obtained and analyzed.

Another point is the sample period for normal flu is --24-- weeks. The current, publicly available figures only track to third week of February.

While we all hope that this turns out to be far less lethal than predicted, attempting to belittle the or ignore the current trends, often for the sake of trying to protect one's political favorite is wrong and pointless.

There is no subjectivity or massaging of the numbers when it comes to science and mathematical analysis of diseases and their impact on human lives.

The numbers I gave for this year's Flu Season are precisely on the usual expected and unfortunately accurate assessments for deaths associated with the Flu.
This year's estimate of 23,000-39,0000 Americans dead from Flu is based on accurate monitoring and confirmed cases.
If you don't want to face this year's numbers, you need only look at the numbers from the last decade. Hint; they're not any better. In fact the number of American deaths from the Flu in the 2017-18 season in the US was 61,000! Sixty-One Thousand!

...and nobody was talking about destroying the economy over the Flu deaths.

Look, this coronavirus is a real problem, and it kills. It is a serious public threat. But like the President has stated, along with many, many scientists and doctors; we cannot let the hysteria and panic which has developed around Coronavirus turn into the wholesale destruction of our economy. That's something that would affect 330,000,000 Americans for generations.

My underlying point has been that the initial numbers sold to the public by bureaucrat/doctors at the World Health Organization (an arm of the UN) were grossly overstated in terms of Case Mortality Rates.
My predictions, based on science and math I've been reading, have been borne out thus far as there are thankfully low deaths in the US (approx. 965 as of today).

Knowing that the Case Mortality Rate of this virus is closer to the level of the common flu virus will allow our leaders to make informed decisions on opening up our economy again without falling prey to the mass hysteria that has everyone running for the hills.
After all, nobody ran for the hills as 61,000 Americans died from Seasonal Flu Viruses in the 2017-18 season. Nobody even suggested closing a single school facility or nursing home over it.
Just business as usual.

For what little it is worth, Haller, I am hopeful this will turn out to be less disastrous.

It is that last number coupled with the feared surge due to rapid spread and zero native immunity that is the problem here.

See that death rate vs infections-? That is what makes this so scary.

I am in the restaurant business. ALL our 26 owned or affiliated locations are closed.

While it would have been possible to keep 5-6 open for takeout/delivery our lawyers advised not doing so to avoid lawsuits from infected workers or customers blaming us.

This is a major disaster on both national and personal level. I, probably more than you, hope for a return to some sort of normal.

But rushing it only to have a second wave hit would be worse than waiting for things to settle.

I hope those drugs under test can ameliorate the suffering and give us back some confidence.

I will take your CDC numbers as accurate, but only at the time of reference.
That's a BIG qualifier there.

What I am telling you now and what I have been saying in all my posts is that those numbers are changing rapidly.
They are changing towards lower values; meaning for the better.

There were a lot of inaccurate assumptions made about this virus initially, and which led to widespread panic. The initial estimates for Case Mortality Rate for instance were well over 3% by the World Health Organization. That value is now revised to approximately 1% by Dr. Fauci and other researchers:

Let's take the R naught value next, which is the ability of the virus to replicate itself in the human population. This number varies with environment, immunity and even temperature.
This is an article explaining the R naught (0) value and their estimates for Covid-19 Coronavirus:

"(compared to Measles)...On the other hand, the influenza virus is less infectious, with its R0 ranging from 2 to 3."

"A number of groups have estimated R0 for this new coronavirus. The Imperial College group has estimated R0 to be somewhere between 1.5 and 3.5. "

So you see how the R naught (infectivity) has been estimated to be approximately in line with Seasonal Flu.
These are not my studies, they are the actual latest scientific figures.

Now getting back to the "boots on the ground" perspective.

I will say again,
we know that the Seasonal Flu, however familiar it may be, has managed to kill between 20,000-50,000 Americans this year.
we know that the Covid-19 virus has managed to kill 1,037 Americans thus far,
and keep in mind that this virus has been around for at least two months now, wreaking havoc all over the US.
Intuitively, we can see that these numbers just do not add up to an "explosion" of death.
This is not to minimize the impact which is very real and very dangerous.
But scientific analysis reveals that the death rate has not been the exponential progression that would be predicted upon a high infectivity rate, a high transmission rate and a high mortality rate.

The logical explanation is then clear; that this virus is not as lethal and infectious as first presumed.
That's good news.
I won't get a Nobel Prize for my observations, but this Biologist has one and he's agreeing with the basics of what I've been saying:

It's just hard to see it through the fog of a nation in widespread panic stoked by media looking for 24/7 news and constant headlines of death all around us.