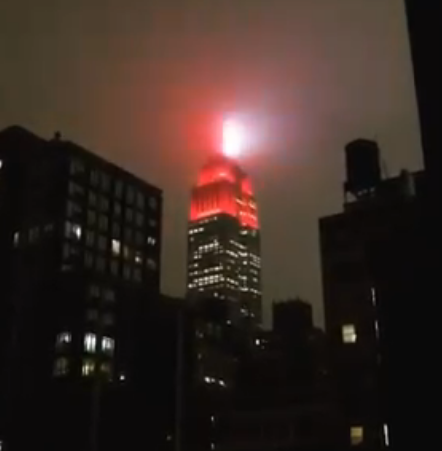 The iconic Midtown skyscraper announced the debut of a display that began at 9 p.m. Monday, and will continue on through the course of the ongoing pandemic.

“Starting tonight through the COVID-19 battle, our signature white lights will be replaced by the heartbeat of America with a white and red siren in the mast for heroic emergency workers on the front line of the fight,” read a tweet from the building’s official Twitter account.
But to some, in addition to solidarity, the siren induced anxiety, as it spun for the first time surrounded by low clouds.

“The @EmpireStateBldg reminding us that the city is in the middle of an emergency,” tweeted Rita King, who also posted a video of the display depicting an eerie scene.

King said on Twitter that she fully supports the cause, “but recommend[s] that the siren be replaced by the iconic pulsing heartbeat effect to reassure our heroic healthcare workers that their efforts will succeed, and soothe nervous New Yorkers now sheltering in place.”

As if New York being the epicenter of the COVID-19 epidemic didn't give enough stress, fear and uncertainty on the citizenry (and surely the world); the concerned folks that manage the Empire State Building actually thought this rapidly growing crisis needed a visual aesthetic aspect to it.
Posted by JQ LLC at 10:36 AM

I thought it was lit red for the Chinese flag?

Its should be a Bat sign in honor of the planets third world trash ignorant pieces of shit eating raw bat brain's & bat head soup to cure hearing loss.
This group of people was actually selling bat heads & snake urine Ginsing's at black markets in Flushing. Nothing labeled in English BTW.

BTW:The real shit hasn't hit the fan yet, all ammo is sold out so buying personal in-home premises protection NOW wont help you when the police aren't around.
Question is: Will the dumb sheep stupid New York voters may finally learn a lesson from this?
Dam shame how all the good people must suffer because of the stupid.