The five borough map of COVID-19 positive patients is out, and it's still hazardously vague 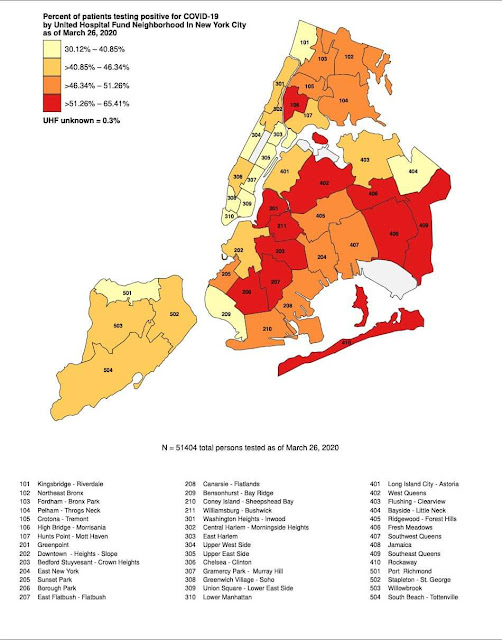 Residents of United Hospital Fund Neighborhood zone 408 who tested positive for COVID-19 make up between 51.26 and 65.41 percent of the region's population to receive tests.
Get it? Yeah, neither do we.

The Health Department released Friday a difficult-to-interpret map of novel coronavirus cases in New York City, one day after a Wall Street Journal reporter called out Mayor Bill de Blasio for a lack of transparency.

"You have to release more detailed data on cases and deaths," Katie Honan told de Blasio. "It's negligent that you're not ... please, everyone has to get this data."

De Blasio lashed back at Honan, "If you believe it's your role to editorialize in the middle of your question, that's your right as an American."

"I don't believe that not only is it not negligent," he said. "I would say to you it's the exact opposite."

Yet less than 24 hours later, a new map appeared on the Department of Health's COVID-19 that tracks the percentage of patients testing positive by neighborhood.

Neighborhoods are designated by numbers instead of name — 408 is Jamaica, Queens, by the way — and the percentages are not connected to population data but to those tested.

The number of people tested per zone? Not included.

The population for zone? Not included.

Some New Yorkers were baffled.

"Anyone from NYC area who can parse this heat map of Covid-19?" asked Twitter user @_mzishi_.
Others were not.

"Map is pretty clear," tweeted Devin Balkind. "It's showing that the administration has no interest in transparency."

Since my role is also to editorialize, as an American I would like to say again that Bill de Blasio is a bastard.
Posted by JQ LLC at 10:11 PM

The only way we could end this virus is end globalism.

If this was engineered, then you know that there is a cure or vaccine, and all the dictators will be immune, don't believe the self quarentine bs, all these older people in government don't end up in the hospital? Miraculous !

Question - Where did the homeless go ?

First, this is a failure of local leadership and a refusal to face reality. Very obvious to everyone what Trump was about, very obvious that the city will always be vulnerable. So what does everyone do? Suffer from Trump Derangement Syndrome and like stubborn children refuse to let fantasy get in the way of reality.

Instead of stockpiling resources for a crisis (and knowing what Trump was like) they did nothing and spent precious resources, read our tax money, on attracting and sustaining the world's riff raff on some fantasy epic on their version on what makes our nation great. Look at this map. Who lives in the red areas?

Now everyone is entitled to an opinion, but when it endangers those of us who does not buy it and places our life in jeopardy by not preparing for the obvious, questions need to be asked and ANSWERS NEED TO BE GIVEN!!

Yes, we all know your comments on Trump. Many are true and this is not a defense of Trump in the least. But your comments about him and the causes does not help us one bit - and distracts us from the real roots, and consequently the real solutions. Stop Blaming Trump. If you believe the things you say why did you not more forward and protect us from those consequences and prepare for an emergency. Epidemics are not new to our city. We are on the top of terrorist lists.

We blame YOU for letting this happen and letting someone like him make it happen!!!

THIS IS SQUARELY THE FAULT OF OUR CITY'S LEADERSHIP ON MANY MANY LEVELS!

Is the radical Left still screaming for open borders and no police in their cities?

Relax. It’s not a crisis. Noah Syndegaard just had Tommy John surgery. See there is no need to ration masks and medical equipment.

If we were to have access to an Accurate, Detailed map of infections it would quickly become clear that the mayor's policy of sanctuary city politics is a dismal failure....

Bernie said that they should all come into the United States. How delusional, irresponsible is that?

Freed Rikers inmates are given cellphones, cab fare and hotel rooms !
What a joke NYC turned out to be you voters are suckers !

"And knowing what Trump was like"
WTF dose that mean ? You do know he won the election !
A Cheap shot you had take like the the rest of #TDS New Yorkers.
Get off the fence and take the RED pill.

The Radical Left is not welcomed in the rest of the country !
Need Some proof NYC is a third world shit hole ?

"Rhode Island plans to send the National Guard out to knock door-to-door in an attempt to hunt down anyone who has arrived in the tiny state from New York City during the coronavirus pandemic. State police, meanwhile, have begun pulling over cars with New York state plates."

"Gov. Gina Raimondo said anyone traveling there from New York will be ordered to undergo a 14-day quarantine and could face fines or even jail time if they’re found to not comply."

“Right now we have a pinpointed risk,” Raimondo said at a news conference Friday. “That risk is called New York City.”

How do you know the political ideologies of those NYC covid refugees?

Good gracious! My little town in fly-over country hasn't had one yet. We're hoping that all New Yorker's are held captive in NYC. You folks brewed it!

"How do you know the political ideologies of those NYC covid refugees?"
True JQ I don't, I stand corrected. But I must say it's a good guess ?
It's a sure bet they don't feel safe in the city they created.

"Residents of United Hospital Fund Neighborhood zone 408 who tested positive for COVID-19 make up between 51.26 and 65.41 percent of the region's population to receive tests.
Get it? Yeah, neither do we." Yes. THIS!

Close borders NOW! That's the lesson. Even Canada is doing it.

The Governor briefly tried to blame President Trump for the failure to distribute ventilators properly. When the truth of the supply chain came out he changed his tune.

As it turns out, there have been enough ventilators available for the patients that needed them, it's just that nobody bothered to pick them up from the warehouse and drive them over to the hospitals where they're needed.

The mayor has not done a very good job of cracking down on his own bloated bureaucracy at Health and Hospitals Corporation which runs the city hospitals. Why aren't the hospitals working in sync to triage patients and move them to those hospitals where the patient load isn't as high?

The governor has stated that there are enough PPEs (personal protection equipment)in stock, so why are we still hearing from nurses that there aren't enough?
The governor said today that 79,000 health care worker volunteers have signed up to assist. Well get them special ID badges and have them assist with these hospitals that we keep hearing about in the news!
Sounds like the management of this crisis is still behind the curve for some reason.

Stop blaming Trump, he put in the travel restrictions early and started the ball rolling on vaccines, revamping testing equipment and distribution of antiviral test medications. There's even a 1000 bed hospital ship arriving in NYC tomorrow. We have several new overflow centers being set up by the feds in all the boroughs.
The stimulus bill was passed for 2 TRILLION.
Now our city and state leaders have to get it together and allocate all these resources.
Like other here, I agree that the unfettered immigration (legal and illegal) needs to be re-examined. For two hundred years we had health standards for immigrants, then the Democrat party decided that anyone and everyone has a right to live in the US; citizens be damned.

Thank You Harry !
Globalism can only work in fairytale Utopias.

All of NYC has become a safety hazard. This is what happens when you keep allowing one family houses to be turned into multifamily houses and you put up no infrastructure even to keep up with the destruction of beautiful neighborhoods. Not only did they build more, they tore down infrastructure that was needed like the 3 hospitals on this side of queens that they took down. Not to mention, they closed down a few high schools too. Yet mayor dumbdumb has no problem building more and more housing and allowing neighborhoods to be destroyed just so they can become the breeding grounds for things like this. We need to stop taking in so many foreigners and people here and we need to house those that are already here. There are other states that foreigners and illegals can live in, but yet we have to keep allowing them here. There should be some sort of housing lottery in order for anyone to be able to live or move here anymore. If you cant fit into NYC or long island, then move! There is no room for more people on this island. You can even go upstate, theres plenty of room upstate! This madness needs to end somewhere.