And the band played on; city construction still continues during COVID-19 outbreak and state shutdown order 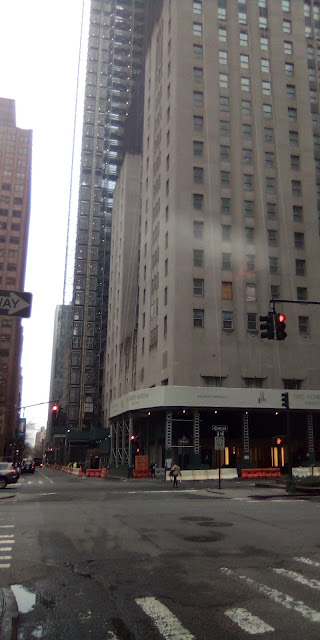 
While most New Yorkers are staying indoors, construction workers are expected to report for work this week — even as some laborers said they fear for their health.

Still, the wide-ranging construction exception has infuriated some in the industry who are alarmed that a laborer’s coronavirus diagnosis isn’t enough to shut down a jobsite.

“Some people thought we weren’t working Monday because we just assumed, when they read nonessential, that we were nonessential,” a worker on a luxury downtown condo high-rise told THE CITY.

To get to work, he takes a packed elevator up 50 floors. The only sink, for hand-washing, is on the ground, he said.

“Just riding the elevator to where you need to work is like an affront to the whole idea of social distancing,” said the worker, who requested anonymity out of concern of possible retaliation by his employers.

He’s holding out hope that the government freezes the industry, but might stop going in if that doesn’t happen. He fears forfeiting unemployment benefits if he walks out.

“Yeah, I’m worried about losing my income, but there’s sacrifices that have to be made to, you know, stop the spread,” said the worker, who commutes via subway. “Money is not worth the health, especially putting other people at risk.”

Mayor Bill de Blasio’s office confirmed that the city is allowing work to go on at sites where employees have logged confirmed coronavirus cases.

“We’re not shutting locations with positive cases,” Julia Arredondo, a de Blasio spokesperson, wrote in an email. “We’ve provided guidance on how to keep people safe and sites should follow that guidance.”

Among those sites with a construction worker who tested positive for coronavirus was Facebook’s office at 770 Broadway in Manhattan. The worker was there last week on a job to build corporate offices and a cafeteria.

“In light of this news, the affected individual will remain out of work and away from the office construction site until cleared to return by their healthcare provider,”  Jamila Reeves, a Facebook spokeswoman, told THE CITY in a statement. “We’ve taken — and will continue to take — all necessary precautionary measures, following the advice of public health officials, as we prioritize everyone’s health and safety.”

As construction has been deemed an essential service by Cuomo, Facebook office construction projects in New York will proceed for the time being, she wrote.

Some construction subcontractors across the city want to pull workers off sites now — but fear general contractors will sue them, industry sources said.

“I tried to shut down field operations last week out of respect for my people, because these are my team members,” said one subcontractor. “And I was told that, no, you cannot do that because you will not only be held liable to meet the schedules of your schedule, but you’ll incur consequential damages.”

Liquor stores are essential businesses... lmfao this virus is a joke.

This virus isn't a joke. Our elected leaders are.

Where oh where are your elected officials and community boards?

Oh, I know. You only criticize the mayor, the governor, the president, and God.

It's not only pay the worker will lose but also potential medical benefits because at least in the unions that is based on your hours and contributions. Shut them down but allow members to take out monies form annuities and vacation funds penalty free. Have the government cover their medical costs for at least one quarter if they are in danger of going out of the medical coverage but shut the jobs down for the time being

"This virus isn't a joke. Our elected leaders are."
Yes JQ but who put them in office ?
Term limits would help and we should demand them now !