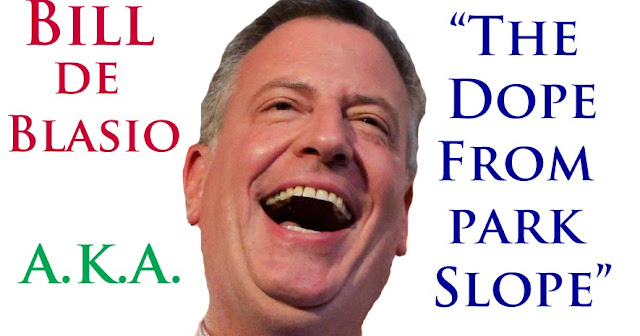 When Mayor de Blasio dragged aides and members of his NYPD security detail to his Brooklyn YMCA Monday morning amidst the coronavirus outbreak, fellow fitness enthusiasts were coughing and sneezing — and a mentally ill person was walking around touching the equipment, a gym source said.


“It’s crazy that he made his staff and detail come with him to the gym and expose them like that,” the source said.


But the incident is just one example of the mayor’s disregard for the health of his staff during the crisis, multiple sources told The Post.


There’s also growing frustration from senior aides, who fault the mayor for dithering instead of making decisions, micromanaging instead of leading, and insisting he knows best instead of listening to others, three sources said.


‘Thank god for Cuomo,’ is a common refrain among the mayor’s staff, made only partly in jest, sources said.


That’s because Gov. Andrew Cuomo has taken the lead on the city’s COVID-19 response — canceling the St. Patrick’s Day Parade, shutting down large venues including Broadway, and even pushing the mayor to close public schools.


But instead of the big picture, the head of the City that Never Sleeps has insisted on proofing all public materials about the city’s COVID-19 response from press releases to ad campaigns, one source said.


“Instead of micromanaging his team he should be leading right now,” the source said.

And the mayor has tossed aside advice from staffers along the way. Staff repeatedly warned the mayor that prematurely announcing a possible shelter-in-place order Tuesday would cause unnecessary panic.


“He can’t handle the word ‘No,’ and it runs people down,” the source said.


“He is dismissive of everyone’s opinion around him,” added a second source.


“It’s very much his way or the highway in moments of crisis and he thinks he knows best,” the second source noted.


Mayor Bill de Blasio has blamed President Trump for the city’s severe shortage of COVID-19 supplies even though City Hall didn’t secure its first order for emergency protective gear until March 6, The Post has learned.

Officials with the city’s Office of Emergency Management tried to purchase nearly 200,000 n95 masks on Feb. 7, but weeks later they learned the vendors had already run out.

It was not until March 6 and March 10 — over two months after the coronavirus outbreak first hit China — that they finally secured the first emergency procurements of masks and hand sanitizer, according to the city comptroller’s office.

“Our city is the epicenter of this outbreak in the United States, and we are lacking supplies because the mayor didn’t notice until two weeks ago?” fumed City Councilman Chaim Deutsch.

“We ought to have been prepared for this. Blaming Trump is an easy way to avoid hard questions, but it exposes a distinct lack of management on the part of this administration,” the Brooklyn Democrat said.

A City Hall spokeswoman said on Feb. 7, the city’s Office of Emergency Management tried to purchase nearly 200,000 N95 masks, but regular vendors had already run out. She added that the Health Department had already stockpiled 19 million surgical masks and said there have been no payment delays.

Comptroller Scott Stringer granted approval for the early March orders of masks and hand sanitizer the same day, but a medical supply vendor who has standing city contracts told The Post that initial requests for protective gear from the Department of Citywide Administrative Services were mired in bureaucratic red tape.

It took the agency an average of 72 hours to complete an order, he said.

“We’d send them a list of products we can deliver within 24, 48 hours,” said the head of one of the medical supply companies, who declined to be named for fear of jeopardizing his current contracts.

“The private sector is knocking on our door all day, every day. We have every hospital facility from Buffalo to across the country chasing us for the same product — N95 masks, surgical masks, gloves, hand sanitizer — and the city just moves so slow, I mean it’s a joke,” he said.

Imagine if Nero didn't fiddle while Rome burned, but while during it he was micromanaging and belittling his generals and making moronic decisions. That's our idiot mayor.
Posted by JQ LLC at 7:18 AM

The toilet paper is made in North and south America.
The chaos in made in D.C.
N Y. and California.

CORRECTION: "It was not until March 6 and March 10 — over two months after the coronavirus outbreak first hit China..." It didn't "hit" China; it originated in China.

Bring us the head of Xi Jinping, Father of the Wuhan China virus.

@JQ: Nero did not "fiddle" while Rome burned. If he played anything, it was most probably the cythara but there is little historical evidence that he played any instrument during the burning of Rome.

The historian Tacitus in his Annals (Book XV, Chapter 38) is our best source of what happened during the conflagration. Note the bold phrase in the second paragraph below. That's all we know of what Nero did and that itself is just, according to Tacitus, rumored::

"A disaster followed, whether accidental or treacherously contrived by the emperor, is uncertain, as authors have given both accounts, worse, however, and more dreadful than any which have ever happened to this city by the violence of fire. It had its beginning in that part of the circus which adjoins the Palatine and Caelian hills, where, amid the shops containing inflammable wares, the conflagration both broke out and instantly became so fierce and so rapid from the wind that it seized in its grasp the entire length of the circus. For here there were no houses fenced in by solid masonry, or temples surrounded by walls, or any other obstacle to interpose delay. The blaze in its fury ran first through the level portions of the city, then rising to the hills, while it again devastated every place below them, it outstripped all preventive measures; so rapid was the mischief and so completely at its mercy the city, with those narrow winding passages and irregular streets, which characterised old Rome. Added to this were the wailings of terror-stricken women, the feebleness of age, the helpless inexperience of childhood, the crowds who sought to save themselves or others, dragging out the infirm or waiting for them, and by their hurry in the one case, by their delay in the other, aggravating the confusion. Often, while they looked behind them, they were intercepted by flames on their side or in their face. Or if they reached a refuge close at hand, when this too was seized by the fire, they found that, even places, which they had imagined to be remote, were involved in the same calamity. At last, doubting what they should avoid or whither betake themselves, they crowded the streets or flung themselves down in the fields, while some who had lost their all, even their very daily bread, and others out of love for their kinsfolk, whom they had been unable to rescue, perished, though escape was open to them. And no one dared to stop the mischief, because of incessant menaces from a number of persons who forbade the extinguishing of the flames, because again others openly hurled brands, and kept shouting that there was one who gave them authority, either seeking to plunder more freely, or obeying orders.

Nero at this time was at Antium, and did not return to Rome until the fire approached his house, which he had built to connect the palace with the gardens of Maecenas. It could not, however, be stopped from devouring the palace, the house, and everything around it. However, to relieve the people, driven out homeless as they were, he threw open to them the Campus Martius and the public buildings of Agrippa, and even his own gardens, and raised temporary structures to receive the destitute multitude. Supplies of food were brought up from Ostia and the neighbouring towns, and the price of corn was reduced to three sesterces a peck. These acts, though popular, produced no effect, since a rumour had gone forth everywhere that, at the very time when the city was in flames, the emperor appeared on a private stage and sang of the destruction of Troy, comparing present misfortunes with the calamities of antiquity."

According to Tacitus' account, you might argue that Nero did indeed try to "micromanage" the event but still no evidence of his playing a musical instrument.

(This QC site is so-o-o educational.)

Come on I came up with an ace analogy, let me have this.

Educational indeed. We don't even have to imagine it.

Any of Nero's descendants ever lived in Park Slope?

He's always been a shitty mayor. Why would he suddenly be good?

1-Masks, surgical masks are not designed for use as particulate respirators and do not provide respiratory protection from viruses like respirator's do.
Paint, Surgical, Dental masks only provide protection against spit, spray paint etc.

2-Surgical masks do not effectively filter small particles from the air and do not prevent leakage around the edge of the mask when the user inhales.
USELESS !!
Mayor DeBlasio, the media, the Governor and the New Yorkers need to lurn themselves some fact before they kill themselves and take others with them with them.

I suspected that too. In fact, I saw early Covid19 related announcements on those commercial building elevator screens saying the masks will not work and now suddenly they are highly recommended.

Surgical masks are only used for their purpose and not as an appendage to wear full time. But people need placebos to assuage their fears.

Unfortunately because of the massive rise in cases, this isn't going to change and people will demand them regardless.

I think the best thing to do right now is stay inside for a while,unless you're an essential worker...

Which is what I am.

Hes a shitty everything, so what's your point? The sheeple voted for this idiot and they are getting what they deserve and voted for.

Globalism is the virus, Corona is the cure.

The point was made by everyone close to the mayor in that article.

The mist telling one was by Jon Rosen. That guy basically put him in office by marketing him during his campaign.