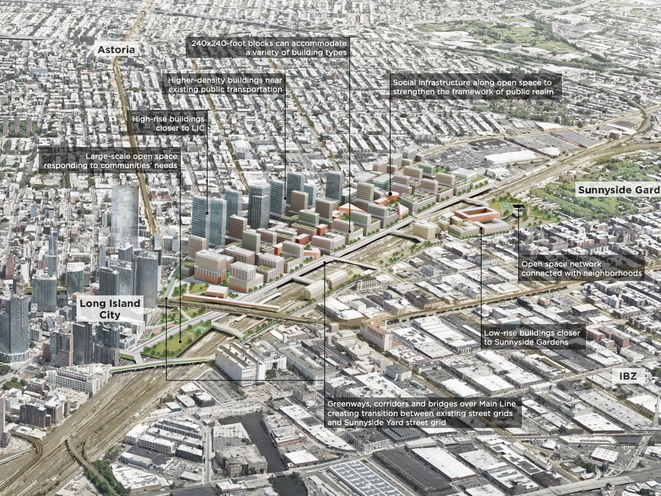 The city has unveiled a massive plan to deck over Sunnyside Yard to make space for 12,000 affordable apartments in Queens.

A sweeping master plan for the project details a new development—which would take decades to complete—would include 100 percent affordable apartments across 140 acres of land. Some 115 acres of the land would be created by "decking over" the top of the regional rail yard.

The city sees Sunnyside Yard development as a "once-in-a-century opportunity" to bring thousands of new apartments to Queens, which currently gains 4,000 new residents every year, with hundreds of thousands of immigrants landing in Queens in the past several decades, according to the executive summary.

"If the borough is to remain an inclusive home to New Yorkers of all backgrounds, then it is imperative to plan for its future growth," according to the plan.

The other 6,000 would be for moderate-income households through a "21st century version" of the Mitchell-Lama housing program, allowing for home ownership.

By decking over about 80 percent of the rail yard, allowing for rail operations to continue below, the project is seen as way of "creating" new land for housing, schools, libraries, and connecting neighborhoods currently separated by the yard. About 780 trains run through Sunnyside Yard everyday.

Working poor and the shrinking middle class have to wait 10 years for an affordable place to live?

Hallelujah! I'll be dead when this is all finished. 6000 apartments for the "poor"? A glorified projects. Look out neighboring Sunnyside Gardens for murder and mayhem. Ah! Smell the Maryjane! (Van Iderstine redux.)

But somehow no trouble finding space for new hotels.

"We're running out of land in New York City, and it is harder and harder to find places for real affordable housing"

All we have seen for past 25 years is luxury towers being erected non-stop...

13 years ago (2007) this very venerable, prescient and knowledgeable Queens Crap blog site addressed the way the city could expand residential and business area construction: filling in the East River. I kid you not.

Check that out HERE. Unfortunately the linked historical articles that Crapper posted are no longer valid on that ancient Queens Crap posting BUT you, esteemed reader, can research for yourself for the potential planned filling-in still on your own.

So. What would be more advantageous, economical? Damming a waterway or decking a railroad yard?

If the Dutch have done and are doing it, why can't we? Check that out HERE.

That's it! F the Sunnyside Yards!

Fill in the East River!

George, the East River is used now for extensive shipping. However, only the channel to the west of Roosevelt Island. The channel to the east of it, between the island and Big Allis, rarely, rarely sees boat traffic. It would be ideal for a reclamation project.

I hope this doesn't happen. The rail yards are pretty cool to look at when you're walking on 39th St., between Skillman Ave. and Northern Blvd.

"Fill in the East River!"
Never going to happen !

We don't need any more people in NYC, period. We are full up. It's crowded here, in case you haven't noticed. If people can't find a place to live here, they can live elsewhere. There are many places to choose from. It should not be NYC's burden (or NYC taxpayers') to welcome all comers with a spanking-new barely-affordable apartment. This phony housing "crisis" is a giveaway to developers who pay politicians handsomely to re-zone the few remaining pleasant neighborhoods, to the detriment of us normal people. Basement apartments throughout Queens, anyone?

>It should not be NYC's burden (or NYC taxpayers') to welcome all comers with a spanking-new barely-affordable apartment.

What about those of us who grew up here, and want to raise our families here, too?

Were running out of land in NYC..as well as hospitals, police and fire stations, and electric water, sewer capacity. Overcrowded trains, crumbling highways, and 100 year old bridges and tunnels. Sure, bring more folks in...