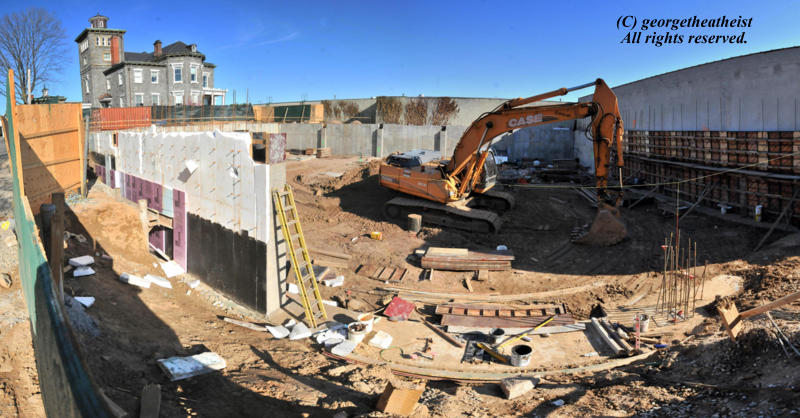 We drove by a few days ago and found warehouse construction at the lot just south of the Mansion proceeding as planned.  A few more months and the view of the Mansion will most probably no longer be visible due to the height of the planned warehouses.  (Our previous blog coverage HERE and HERE.)

Warehouses? Why not a hospital there? C'mon architect Caliendo redraw the blueprints.

You have the leadership of Astoria responsible for selling their community down the river. Everyone knows who you are and why you did this. Was tossing your community under the bus worth it?

Overreaching don't pay and in this instance you made a big mistake.

There are Lists on the 'silent' partners. In the future when your names are mentioned the Mansion will be linked back to you in the same breath. It will be thrown in the faces of your grandchildren and their children. Nice legacy you are leaving them.

In Astoria they only care if a pizza parlor closes - you can get 50 comments. The Steinway Mansion not so much.

QUEENS County is a raw sewage dump, and the raw sewage is the always filthy, politically failed leadership (that has NEVER led by example), ALL of whom SO ORDERED it to be the garbage dump that it is today.

When a purported society doesn't value its formerly traditional way of life, community input, antiquities and priceless artifacts, then the same branches of that society will ironically endeavor to destroy it all from within. THIS is the end result of what societal collapse and government tyranny look like. Get used to it, possums: Help is an illusion and you HAVE no rights, freedom and democracy.

IN FACT, it goes back to Tartarian times——when when you’re transitioning to a new culture, one uses orphans, as they have no history, no culture, no memories because they are a ‘clean slate.’ As we move toward technology, the youth will go willingly——as the elders will warn of the dangers.

❝Every record has been destroyed or falsified, every book rewritten, every picture has been repainted, every statue and street building has been renamed, every date has been altered. And the process is continuing day by day and minute by minute. History has stopped. Nothing exists except an endless present in which the Party is always right.❞ ——George Orwell, ‘1984’

❝The further a society drifts from the truth, the more it will hate those who speak it.❞ ——George Orwell

❝The most effective way to destroy people is to deny and obliterate their own understanding of their own history.❞ ——George Orwell