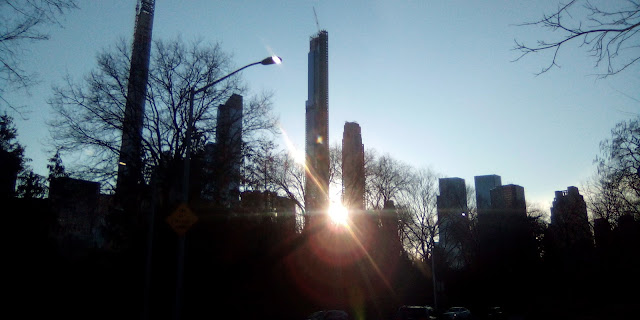 Mayor de Blasio declared a state of emergency, and Gov. Cuomo banned public events of more than 500 people Thursday as the dogged and potentially-deadly coronavirus picked up steam, nearly doubling the number of infected New Yorkers in just a single day.

No bright lights. No Bible studies. No big or jam-packed crowds. That was the effect of the governor’s gathering ban, which goes into effect 5 p.m. Friday, and applies to large houses of worship, arenas and concert halls including Madison Square Garden, Barclays Center and the Apollo Theater in Harlem.

Venues that draw crowds of less than 500 people — including bars and restaurants — can only be filled to 50% capacity under the ban, Cuomo said.

The new restrictions and the state of emergency were put in place amid a rapid rise in confirmed COVID-19 cases in the city. De Blasio said there were 95 confirmed cases across the five boroughs including an alarming 42 cases in just one day. Of the sobering total, 29 people were in mandatory quarantine, de Blasio said. The mayor predicted the city could have 1,000 cases by next week and said the crisis could last six months or longer.

Under a state of emergency, the mayor can order public spaces to be closed and cleared, restrict vehicle access, initiate curfews and modify labor contracts.

De Blasio said the restrictions will be hard on city businesses.

“We don’t do any of this lightly. This is difficult stuff," de Blasio said. “It’s really going to be kind of a hole in our lives. It’s painful. It’s not something we would ever want to do, but we have to do.”

“There’s one small piece of good news,” the mayor said. “We had the first case of somebody coming out of mandatory quarantine and able to go back to their lives.”

De Blasio said he wants to keep the schools open.

“We are going to fight tooth and nail to protect our school system for many, many reasons,” de Blasio said. “It where our children are very safe, and our parents have no alternatives. We’re going to do our damndest to keep the schools open.”

The city has also suspended evictions anywhere in city housing unless criminal activity is involved.

The state, meanwhile, will impose restrictions on nursing homes across the state, including banning all visitors, and will mandate that all staff wear masks and be monitored for symptoms.


The elderly are particularly susceptible to the coronavirus.

Cuomo said nursing home facilities can make exceptions for those visiting a family member who is critically ill or facing death, though they, too, must wear protective gear.

I might sound persnickety but when Cuomo declared a state of emergency for New York State, isn't de Blasio's announcement redundant?
Posted by JQ LLC at 6:10 AM

Translation - city housing is NYCHA- not private landlords who get government money to build and maintain the buildings. That means black people are being pandered to once again and won't get evicted but the rest of us can and will be evicted. They might riot and burn down the city or stab someone on the subway if they don't get low cost housing for eternity.

I was in Washington Heights yesterday. A lot of street activity, sidewalk stalls set up for selling-lots of people in the streets. Maybe someone should let the Dominicans know that there's an epidemic - How about the illegals selling food out of the trucks in Jackson Heights? Shut them down. Closing down the food trucks that operate blocking streets and sidewalks would make sense to me.

How about Jackson Heights? Roosevelt Avenue down from about 72nd Street, the streets are packed night and day. Are these people going to be told to go indoors and not congregate? Maybe someone should let them know. I understand that they and their enablers believe that NYC, New York State and US Federal laws don't apply to them -do they think that they can't get this virus? I'm sure if they do - according to them- it will be all Trump's fault or a random White American's fault.

Ninety five cases and it's a state of emergency? A state if concern perhaps, but emergency? Get back to me when this thing is serious.

BTW let's get it straight: it's not the "Corona" virus. It's the "WUHAN" virus.

Coronavirus is Made in China !

A state of emergency? Really? I'd say it's more like a state of anarchy! No vaccine for what ails New Yorker's