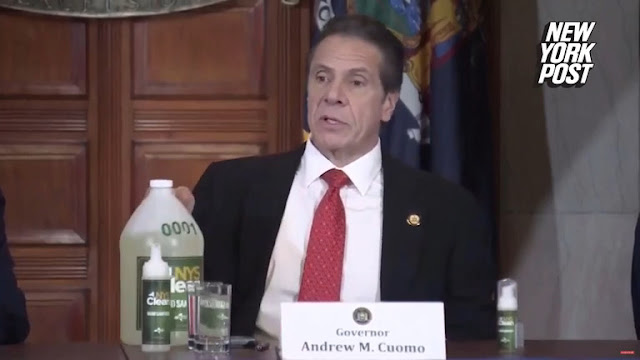 Gov. Cuomo scored a dramatic expansion of his emergency powers that left even top Democrats wary thanks to provisions tucked inside of a hastily drafted $40 million spending bill to fight the COVID-19 coronavirus.

The legislation expanded Cuomo’s powers to declare an emergency and even suspend laws state or local laws in their entirety, with little oversight from lawmakers.

“What it does do is give the governor very extensive, and almost unlimited, affirmative legislative power to not only waive existing laws and provisions of existing laws,” said longtime Assemblyman Richard Gottfried (D-Manhattan), “but it also empowers him to essentially issue new legislation.”

“I cannot vote in good conscience to give the governor what are in essence, dictatorial powers when he and the health commissioner already have sufficient power to deal with coronavirus,” said Assemblyman Phil Steck (D-Schenectady), ahead of his nay vote Monday night.
However, those concerns did not stop the Assembly and state Senate from overwhelmingly passing the legislation, which sets an April 2021 expiration date for Cuomo’s new authority.

New York’s jailbirds are helping to combat the coronavirus.

Cuomo said the “superior product” is not only cheaper than brands made by greedy commercial businesses but will be readily available to New York governments, the MTA, schools and even the prisons where it’s being made.

“It’s much cheaper for us to make it ourselves than to buy it on the open market,” said Cuomo, adding that a gallon jug of the state-produced product costs $6 to make.
It has a “floral bouquet,” the governor added.

What a fortunate development. Too bad herr governor pissed away all those subsidies for a shitty movie studio the state wound up selling for a buck when that could have went to a company that manufactures hand sanitizer that would have created jobs that paid $15 an hour.

"You think this sounds like genius but its not." - Some Guy

Notwithstanding Andy's defiant hypocrisy of his criticisms of the president, this is straight from the Cheney/Bush rulebook re: Patriot act.

That is the Post; a ready substitute for toilet paper.

If it were some republican saying that, they'd say 'bravo".

It doesn't say anything about the miracle sanitizer being available to the public. So I guess the public will have to pay the going price because we can't manufacture it ourselves like the state is, taking care of itself and its own

It is a Presidential election year much ado about nothing.

Clever and not unsurprising. Short term it puts under utilized labor to good effect. Idiots hoarding dozens and dozens of bottles of sanitizer (not to mention soap, toilet paper, paper towels...) does the general populace no good.

They probably are applauding that. Really, that's some neoliberal shit Mario's son is pulling, I wonder if that stuff was made overnight for that press conference.

How much longer does this clown have in office anyway?
He seems to have been there forever with nothing of significance to show for his tenure.
NY State is a shell of what it was, or what it could be.
He's basically presided over a mass exodus of middle class New Yorkers (many with generational ties to this state and city) as he's promoted sanctuary state policies and confiscatory taxation which does nothing to improve the everyday lives of Americans.
As a rule, I believe every politician needs to be told directly how poorly they've done for this city and this state over the past decade.
Where are the big ideas?
The ones that build society, and don't feed off the carcass of a dead middle class.

JQ LLC said...
@Rob
They probably are applauding that. Really, that's some neoliberal shit Mario's son is pulling, I wonder if that stuff was made overnight for that press conference.

I don't agree with those measures either.

I am pointing out that rag and the entire gop are quite OK with the sick mess in the White House attempting to become a dictator.

We live in the "interesting times" as the ancient Chinese curse supposedly says.

I bet if it has alcohol in it there's going to be a big problem with prisoners drinking it.

LOL,
Leave it to libtards to accuse President Trump of attempting to become a dictator because he's shutting down borders (to Chinese nationals,etc.) in the midst of a severe viral pandemic,
while the same type of libtards are praising the efforts of President For Life Xi in China (an actual dictator along with his communist party) at containing the effects of the same virus they allowed to propagate around the world!

I lived in the shithole formerly known as New York for over 44 years, seen it get progressively worse and worse. For a few years under Giuliani life in New York actually improved. Then we got Bloomberg who turned this city into place for only the rich and famous, pushed out the middle class. Now we got DeBlasio who in actions is identical to Bloomberg except for him knocking down the NYPD, but still doing the bidding of developers and the wealthy at the same time.
I say unless you got Mommmy and Daddy paying for it, do not come here, that is my message to young people, lot of other cities much more livable. And anyway, these days everyone is glued to their phone not interacting with other people, so what is the point of being here?? I can get my Netflix and my Sony Playstation in rural Pennsylvania but pay a fraction of the cost for housing and taxes. Plus I do not have to be crammed next to a bunch of people I have absolutely no common ties to who would make my life miserable. Lot more privacy too.

If you notice when I bend over there's a floral bouquet.

As another former New Yorker of over 40 years, I can sympathize with the Anonymous, who encapsulated the years before and after Giuliani. They need to put up a life size bronze statue of Rudy in front of City Hall. The one and only true Mayor, I ever saw in my many years as a citizen in that town.

The hand sanitizer project is great. Nice thinking outside the box by the Governor.
The near dictatorial powers aren't. Can't wait for him to decide to send the National Guard door to door to take everyone's guns so they'll be defenseless against hungry mobs.

@Harry Haller - I've noticed that too. People online reporting other people for 'sinophobia' and 'racism' for calling out the Chinese Communists or doubting the truth of their claims and reporting. Useful idiots or willful traitors?
And now even the media is getting into the act, saying that calling this the "Wuhan flu" or "Chinese coronavirus" is somehow racist now that Trump and co. are using those terms, even though they were saying the exact same words a few weeks ago.

They make it by fermenting grapes mixed with Tabasco behind toilets until it boils,then it's soap.