You might be waiting awhile for your state tax refund 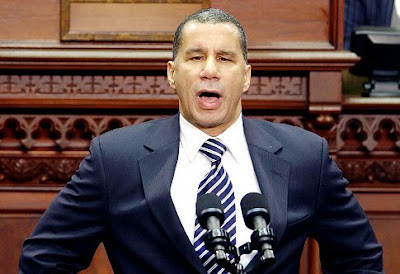 Some New Yorkers could see a delay in the arrival of their state income tax refund checks if Gov. David Paterson decides it's the best way to make sure the state has enough cash.

The state currently limits the amount of tax refunds it pays in the first three months of the year to $1.75 billion. Mr. Paterson is considering lowering that threshold to $1.25 billion because the state must roll $1.4 billion into next year's budget to close a current year budget gap.

The state has until June to pay the refunds before they start accruing interest.

The governor is expected to make a decision in the next few weeks.

Photo from the Daily News
Posted by Queens Crapper at 12:35 AM

This doofus Governor is gonna run for Governor? I support his bid. bc watching him campaign will be precious. What is the over/under on anyone bein called 'racist' by Sharpton for not supporting him?

I have changed my W-4; more deductions on the NYS line, (so less is paid to NYS) and more paid to Federal. Then I will hopefully break even with NYS or have to pay.
Better than waiting months to get a refund.

The Governor and the State from Hell!
Do exactly what was suggested by writer before me to avoid receiving refund - retain your money now. See below:

I have changed my W-4; more deductions on the NYS line, (so less is paid to NYS) and more paid to Federal. Then I will hopefully break even with NYS or have to pay.

If I dont receive my refund then I wont pay my NYS taxes.
If they dont pay, why should I?

There is no better time then the present for lower New York to secede from the State.

Just end withholding a let the government deal with it. Make people write out checks every month to the IRS and NYS Department of Finance and they will get a better sense of what government is costing.

What is the over/under on anyone bein called 'racist' by Sharpton for not supporting him?


not gonna happen if it hasn't happened already. sharpton's not an idiot, he's a hypocrite.

Wonder what would happen if I decided to pay late? Bet they wouldn't waste any time finding me and making me pay.

Why should our money be held hostage because our government officials are incompetent and can't control spending? Time to end waste and inefficiency by dumping them all and starting fresh. It's always the taxpayers who suffer because of someone else's incompetency.