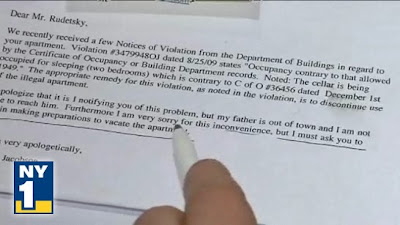 After the flood, the couple had their apartment tested for mold by the city. The tests came back positive, but the landlord soon had even more disturbing news.

"We got an e-mail from our landlord saying, 'I've just been informed that the apartment is illegal, and you need to vacate as soon as possible,'" says Rudetsky.

Shocked, Wesley and Rudetsky went back to CitiHabitats, the realtor that found them the apartment.

"They were outraged. They said that they would help us, that it would be top priority for them, and unfortunately the very first apartment that they presented to us was another illegal apartment," says Wesley.

The pair then took up their own search for a new place. They say they cannot believe the irresponsibility of their former landlord and CitiHabitats.

"Once I found out why the apartment was illegal, I was angry because it’s so obvious that it’s an illegal apartment. Once you see a bedroom without a window, that’s illegal," says Wesley.

Wesley and Rudetsky also say they should get back the $2,100 they gave to CitiHabitats and $2,520 they gave to the landlord as a co-broker. After CitiHabitats returned nothing and the former landlord did not even return the security deposit, the couple took the matter to Small Claims Court.

NY1 contacted CitiHabitats and the president would only say, "It is a landlord-tenant issue. We offered our services when we were appraised of the problem."

The station then contacted the landlord, who claimed he was originally not aware that it was illegal to put two bedrooms downstairs, and when he was told it was he asked the tenants to move out.

Call AG Cuomo and get their real estate license yanked.
Posted by Queens Crapper at 12:11 AM

Sounds like a basement apartment and these are rarely legal.

Cuomo will do nothing cause he gets money from real estate lobby.

I had another broker run the exact same thing past me: an illegal basement apartment. When I asked whether that was legal they lied outright. This nonsense is rampant. They should be tried for manslaughter if someone dies too, along with the landlord.

Then people are stupid. Everyone knows that basement apartments are illegal.

NO not all basement apartments are Illegal....It has to be more then 50% above ground and have 2 exits.

Ive seen people convert a 1st floor garage into a room and added a big picture window and it passed inspection as a legal 3.

It passed inspection as a legal 3 and they didn't apply for permits to do it or amend the C of O, then please report the inspector.

FYI: the terminology is all wrong. "CELLAR" apts. are illegal. As stated above, a "BASEMENT" is 50% or more above ground and requires 2 exits. Landlords are converting/dividing their cellars into illegal dwellings.

They know as well as all firms do what is illegal or not. They should abide by the law or lose their license if they performed against the law knowingly.