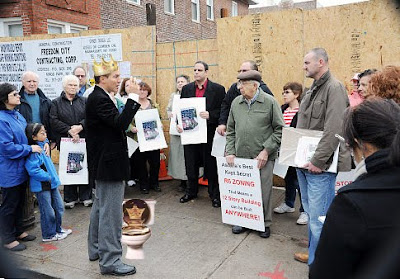 ...zoning may not be approved in time to prevent the construction of a 10-story building in the middle of Norwood Gardens, a leafy enclave of smaller homes along 36th St.

"This is a beautiful block with unique architecture and a special ambience, which this new zoning will protect," said City Councilman Peter Vallone Jr. "Unfortunately, some people are trying to rush projects in before it happens."

Neighbors are also concerned about the area's utilities and services being stretched even thinner than they are now.

Under current zoning law, the area has an R6 designation, which allows buildings of different heights, depending on the lot size and other variables.

The Norwood Gardens area will receive one of the strictest zoning designations, Vallone said, in order to keep the current low-rise flavor.

Vallone said he has personally reached out to several property owners and tried to dissuade them from constructing oversized buildings in the area.

"Some have been receptive," he said. "Others, not so much."

Though the construction currently taking place is legal, Vallone said the rally was an important way to send a message.

"Hopefully, anyone else thinking of destroying the character of the neighborhood will understand they will have to deal with their neighbors," he said.

This guy apparently doesn't think much of his constituents' intelligence.
Posted by Queens Crapper at 12:30 AM

A couple of years ago when a totally out of character building was plunked down in the middle of our block, "Mystery Man" Gianaris pulled himself away from funding 15 story HANAC projects, and knocking Con Ed, to show up and cluck cluck cluck a few words and then disappear. The clubhouse rewarded him by promoting him from Assembly to Senate and appointed another nonentity to replace him.

Vallone Senior? No help. Perhaps that was because he might have been preoccupited with thinking about organizing Constantanople and Vallone, a lobby group for organizations like Keyspan....to say nothing about rumored chasing after real estate deals and paling around with the likes of Pistilli.

Vallone Junior? Did not support Tony A's bill to stop developers from doing something like this, and when our community asked him to resubmit the bill, shrugged and said its impossible.

Come clean guys … with your record ... and real estate interests!!

Well here is one group that will be frantic to get the rezoning passed and will squish any efforts for discussion and review.

Of course, they still will get the 10 story building.

This is a beautiful block with unique architecture and a special ambience, which this new zoning will protect," said City Councilman Peter Vallone Jr.

Full of Crap, Peter. The ONLY thing that will protect that block is Landmark Designation.

But we can't have that, can we? Only swimming pools and firehouses in that part or your little world.

Remember how you (and your friends) supported tearing down your community's namesake, the Astoria Institute (1828) at St George's Church for a senior residences that County Clerk Gloria DAmico's son built?

Rumored tombstones from St George's in people's backyards from that little exercise.

Still hauling debris from 150 year old homes every season from that neighborhood.

But then again, that is fine. "People still need freedom to alter homes for that extra room for granny", eh?

Yes indeed. Astoria is a community "full of charm" and you are the defender of that "charm." More "charm" being built every day.

Some leadership! Some credibility!

One thing is certain, as that developer posted here last week, they will get the green light now to go apeshit and stampede the sheep so they gallop headlong over the edge.

These guy have a playbook and, like a 3rd world security service, know how to apply mimimum pressure to extact maximum pain.

Now, more than ever, the community must stay together and fight this.

There is nothing they can do to stop the development (even after the zoning everyone knows that with a community facilty, a spot variance, or when all else fails, just let the developer do what they damn fell please.)

With the current leadership, every block in Astoria is doomed.

You see my friends, a good chunk of the million souls for Plan2030 has to live SOMEWHERE and that somewhere everyone knows, will be, to a large part, Astoria. Near the city, on the waterfront, good transporation, they are squarely in the city's bullseye.

But there is one thing the community can do to save itself.

They can work togher.

And there is nothing the machine can do to stop them,

And someday, maybe, just maybe, they can get new leadership.

That is not necessary.

Let every man rise or fall to their master.

That is enough punishment.

When they developed that building on your block a decade ago should have sent a shot across your bow.

Instead you did everything wrong:

2. Went alone and ignored working with the broader community.

3. Decided, against advice, to pursue zoning covenents instead of Landmark Designation.

Now you are going to be the poster child screaming to the press like headless chickens that Vallone is the best thing since Jane Jacobs and Louis Mumford and that the other 600 blocks should go along with this zoning disaster because of ...

Good luck Norwood - with overbuilder HANAC moving in a few blocks away, and your corner shopping distict now little more than a urinal/party place for the Greek expats on the Island, you have your work cut out for you.

Hopefully, anyone else thinking of destroying the character of the neighborhood will understand they will have to deal with their neighbors," he said.
---

that is pretty funny

- a growing influence of absentee landlords, a community isolated and cut off from the rest of the city, ignorant suspicious peasant-types ready to squeeze the last dime out of anything in their little grubby hands, mailboxes stuffed with real estate mailings, a steady diet of prodevelopment stories in the papers that are really little more real estate ads, and prodevelopment rants in the news that are not more than politicans paying off campaign debts, and yea, sure,

get the neighbors involved.

Look at Sunnyside Gardens, its shameful how you stoked a howling mob into making a laughing stock out that community's efforts to preserve their neighborhood.

Cautionary tale for all.

You will get double crossed if you only work within the system.

You need to work with other grassroots groups within the community to succeed.

You need to learn from other neighborhood's experiences to know what is in store for you.

Only in Astoria would the Crapmeister's Crapper of the Year be considered a fighter of developers.

Or should we say, only in Astoria would that not be a joke.

People! People! stop fighting with each other.

Look at who has made campaign donations, if there is any connection between the building and anyone in Community Board etc, and follow the money.

If you do, I think if you do, might be surprised and perhaps find a way around this.

As usual this B.S. site skews facts and becomes self-serving with the same 3 or 4 people creating their own reality from their parents' basements. Truth be told, Vallone has been the driving force behind this rezoning and has worked with countless groups to get it passed. It would NOT have happened without him, and Astoria would remain zoned as an R6. The Norwood Neighborhood Association has met with him on numerous occasions, fought for an even more restrictive zoning, and got it, despite opposition from city planning- because of Vallone. The new zoning will allow no new development there. How about taking a look at yourselves this new year and see just how much crap comes out of your own mouths before you start throwing around lies..

As usual this B.S. site skews facts and becomes self-serving with the same 3 or 4 people creating their own reality from their parents' basements.

---
Which is why this site has a traffic of 3-5 thousand a day and one of the top blogs in NYC as per the Voice.

Speaking of basements, perhaps you would like to emerge from yours and step out of the community for some fresh air.

I know a lot of people, from Hells Kitchen to Bayside, that are just dying to hear about your friend, the Moses that will be leading your community out of the wilderness, perhaps we should say the Robert Moses, Peter F. Vallone, Juniah!

It would NOT have happened without him, and Astoria would remain zoned as an R6.

That is pretty sad cause in every rezoning, the process was started by a civic, not a politican.

Can you explain why Astoria is unique?

The new zoning will allow no new development there.

This is an interesting thread.

Norwood, I am curious about something. I understand this is the biggest rezoning in the city - hundreds of blocks.

And you believe this is great for the community because your one block got what it wanted.

So the overdevelopment around you, schools, hospital, traffic, power plants, building height, will have no impact on you at all?

Ditmars, that is right. Cause we could do nothing until Mr Vallone came in and listened to our concerns.

Our block will be fine no matter what happens around us.

You can do the same for your block. Just call his office - his people are very helpful in listening to us as is City Planning.

Everyone in NYC knows Mr Vallone fights the developers to help the people people.

That is why Astoria remains a nice place to live as it did years ago.

Meanwhile, back the ranch, NYC's favorite community website, astorians.com has not been silent in the face of the largest rezoning of their community's history.

Following is the threat charting their struggles:

no one is building a 10 story building.

the whole thing is staged.

vallone will come out looking like a hero because he 'reduced' it height to 6 - on a plot that formerly held a 2 story house.

This is so funny. I used to think that everyone out there calling the shots is full of shit - now I know why they are.

PS Telling some of my friends about this.