This just in...Monster-rat is still out! 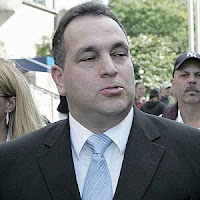 NEW YORK (AP) -- A federal judge has rejected an attempt to temporarily block the expulsion of a New York state lawmaker.

Colleagues voted to remove Hiram Monserrate (MAHN'-sur-aht) because of a misdemeanor assault conviction.

A civil rights suit filed last week asked Pauley to reverse the lawmaker's removal and stop a March 16 special election to replace him.

He's backed by the New York Civil Liberties Union. Monserrate says the state Senate denied him due process and his constituents their right to representation.
Posted by Queens Crapper at 12:43 PM

good! we don't want that woman-beater!

He looks like he's put on more weight since this all started.

The poor man. How will he support himself now? All he has left is that tax free police disability pension.

Breaking news, Monserrate will also be on the ballot in March as will Helen Sears who will run on the GOP, IND and CON line.

Peralta and Monserrate split the Latino vote, Sears wins going away and the State Senate is deadlocked again.

No one wants an abuser to represent them. Dump him, he's a criminal.

Anyone here really think that he finally gets it?

lmfao..... now he'll go home blaming it all on her and the dumb ass that she is will put up with it..

I cant believe this violent asshole felon is free for cutting up a womans face wile Bernie Karock got 4 years in the pokey + a $188,000 fine

Well, Ch 11 news went to to his district and everyone they asked on camera said that "he is doing a great job" and "he should not have been removed" "should run again".

Ethnic chauvinism, stupidity..whatever, those were the results.

His pension is not tax free,and he was never a "cop",he was a police dept employee.

Just wait till the special election. All his constituents will vote for him again. They see nothing wrong with domestic violence. Most hispanics smack their women around. I guess it's an ethnic thing. Watch, he'll get his job back. He'll be around until his girlfriend has had enough and stabs him to death. That will be the only way we will get rid of him.

He must kiss a lot of ass cause he has no lips!