Avella announces his run against Padavan 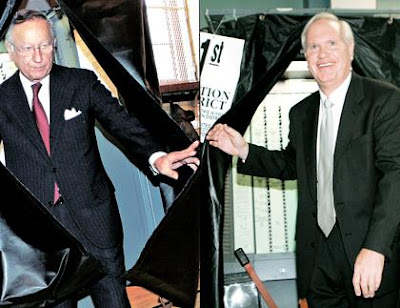 Avella said he will probably jump into the race by the end of the month and plans to focus on the same issues he championed on the Council, such as fighting overdevelopment and ethics reform, along the campaign trail.

“The one thing I found surprising on the Council is how little power the city has and how much of the legislation I introduced was dependent on Albany,” he said. “I think I have the reputation for being a reformer. If there’s any place crying out for reform, it’s Albany. I want to make government more responsible and ethical.”
Posted by Queens Crapper at 12:09 AM

I wish Avella all the best, he is welcomed to run against Marge Markey in my Nab - she is a non-existent Pol here in Maspeth & Elmhurst.

Wrong, the city council has too much power but it falls on the hands of ONE person- that fucking red carpet dyke christine Quinn. And the Senate can't do anything. Sorry Avella but Padavan is the man, he has done a lot for our district and I can't forget that.

Personally I rather see Avella take Stavitsky's seat or better yet Ackerman... Padavan isn't my district but this will be a tough one who to volunteer for and support.

Padavan should retire before Tony embarasses him. Forever, and ever and ever Padavan will be known as the guy who got thrown out of office. How sad.

Actually it was Avella who embarrassed himself in the mayoral race. Couldn't raise money or even votes. OMG. I have nothing against Avella but he can't work with people and can't get things done. Padavan is respected by his peers whether they agree with him or not and he has accomplished a lot for his district. Padavan is the man. Avella should have stayed in the city council. dumb move.

Padavan is one of the few honest men in Albany.

--
pa-lese. Its always been the mayor and the county bosses.

get real. this is not kiddie school on this blog.

Tony is a well meaning fool running against Frank.

He should have run against Ackerman instead.

I guess the Dem machine ponied up plenty for Avella to unseat a Republican.

Makes you wonder about Tony's past "altruistic" intentions.

Can't give up their power...not that Tony ever had any of the real stuff in that department...considering he made enemies of every other pol (including the mayor).

A lot of service he'll be getting for the senatorial district if he wins.

Avella makes some of the dumbest move. we like padavan. Avella, if you are reading this, run against Ackerman. You will have a better chance of winning. Tony's ego gets in the way of logic. I like avella but i voting for Padavan, who has done a lot for us. Who the fucks cares about gay marriages? no too many in Padavan's district. sorry but it is true.

Padavan has done a good job for all these years.
The one area I did NOT agree with him was when he supported extending mayoral control last summer..

And for that Sen. Padavan, you lost my vote.

Padavan is another one who just won't give it up until the voters throw him out.

They keep running over and over until even the dumb voters of Queens realize they are too old and feeble to be effective any more.

It happened to Maltese two years ago, Helen Sears last year, and now there is Padavan won last time by about 200 votes, he used to win by double digit landslides not that long ago.

Frank, you are in your mid 70's, if now is not the time to retire and enjoy your grandchildren, when is?

padavan has my vote.

the republicans in their feeble attepmt to offer avella the republican line against ackerman, have started the lion that roared. this is gonna be a twenty point loss for padavan. gennerro came within 200 votes. and no matter how much ragusa and tabone scream about obama, anyone who actually lives out here know that there was no spike for obama. no black people live out here. it simply was the first time padavan had a challenge.

anyone know who nora marino is ?

well you should, cause four years ago, without spending a dime or anyone supporting her, nora marino, in a non presidential election year, got 41 percent of the vote against padavan.

avella is the dragon slayer.

this race will not be close.

This Ragusa sounds like a man with no moral compass.

To offer his partys line to Avella, one of the most liberal former concilmembers just to have a candidate against Ackerman, and also to offer the line to the very liberal Sears to come out of retirement to run for the Monserrate seat, what is the point to offer these liberal democrats the Republican line, just to have a little patronage?

Ragusa has been braying that he was a man of principle for not doing the same with Bloomberg!!!

Did Bloomberg refuse to meet his price??

Actually, Ragusa did eventually fold his cards and allow Bloomberg to have the line, so apparently Bloomberg in the end did meet his price.

Padavan is not the problem, and he is a good representative of the homeowners of eastern Queens. I like Avella... but please, Tony, go after Ackerman.

Padavan did more for northeast Queens as a Senator than Avella did as a city councilman.

Time to get a real job Tony...like everybody else.

If Padavan had to disenfrachise disabled people to win, how exactly is he going to beat Tony Avella ?

can you hear the footsteps !!!!

You seriously think that the tide will run pro-Democrat come November.

The district was always south west Queens, if it had stayed that way it would still be republican.

Serf is way too pompous and self absorbed and his party is suffering for it.

Time for some new thinking.

2012, a lesson for Joe Crowley ! If he gives up east Bronx. where does he go? Down to Howard Beach, where Addabo is popular? Or take back Astoria, and face a threat from Vallone??

Avella should get a job.

First he slams the Democratic machine and now he takes money from them to drive out a Republican who's delivered results.

What's Avella done for his district that wasn't politically motivated ?

Judging by its appearance...not much!

I'm continuing to vote for Padavan!

Remember Tony once worked for the CAU (LOL).

He made such a poor showing against Bloomberg.

One thing I know for a Fact Avella is a Decent Man, My old counsil man Lui did nothing when we needed him turning to Avella was our only option and DAMN RIGHT THE MAN KEPT HIS WORD!!!

Well its a tough choice, sure padavan does appear honest and less sleazy then most politicians, but people want change, avella is probably better than gennaro, the bottom line is the padavan is a bit weak, he lost a bit a power in the GOP senate after bruno and others got a hold of power.

It's because of him that many votes get voted down because he's a republican, this is not to say a democratic majority wouldn't be corrupt but moderates may tip the balance although special interests may make a "moderate" really a person who "moderately takes special interests.

Padavan is one of the few gop's left in new york city, redistricting may finally enable the city to bring back the commuter tax and bring more revenue to the city such as school funding , medicaid reimbursement, (city sends more to albany then it brings back), one note of caution though is whether politicians will work to do that , its a bit difficult to understand.

Either way this is interesting because avella is not like other democrats, but he's a bit unpredictable and not sure how much of a coalition builder he will be.

One can say padavan is honest but is treated as a bit "soft" to the GOP establishment in t he state senate .

You know, if padavan wins and finishes out the next term it will be 40 years since he will hold office, really if avella wins he will hold back his 40th.

Frank Padavan represents the type of Queens resident who would cavalierly refer to City Council President as a red haired dyke and other commentators who don't comprehend the damage to their own families by denying same-sex couples the right to marry. Sadly, he is probably correct that many residents in Bayside are a bit too comfortable in their outward conservatism while being consummate hypocrites in private, but that is just the reason why those of us who want to see us evolve along with the younger generation, who, for the most part, could not give a tinker's damn about who marries whom, need the changes that traditionally only Democrats want to deliver.