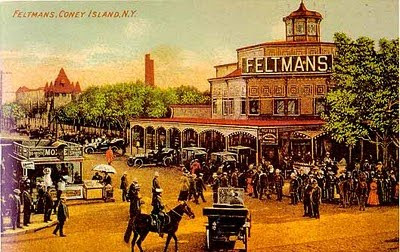 The struggle to save Coney Island’s storied past while paving the way for its glorious future has come down to brick and tile.

It’s all members of the Coney Island History Project were expecting to extract from the demolished Feltman’s Building this week.

“It’s really a shame,” said Charles Denson, executive director of the Coney Island History Project. “I think it could have been repurposed. It’s a solid building, but it just doesn’t fit into their plans.”

The city is busily clearing the former site of the Astroland Amusement Park at 1000 Surf Avenue in advance of the new “Luna Park” amusement park set to debut on Memorial Day.

The Feltman building, located on same site, is thought to be the only tangible remnant of Charles Feltman’s vast Coney Island empire of restaurants, thrill rides, and attractions.

Feltman, who immigrated to the U.S. from Germany in 1856, is credited with inventing the hot dog. Many believe that Nathan Handwerker, founder of Nathan’s Famous, once worked inside the same Feltman building tagged for demolition. 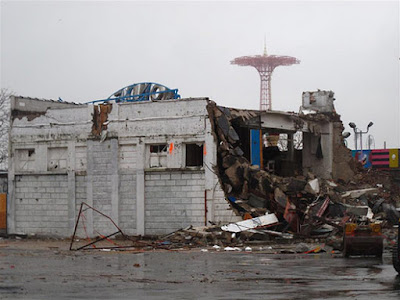 Update from Curbed
Posted by Queens Crapper at 12:10 AM

I don't want to bust anybody bubble but those walls look like like late 19th century stock cinder block.

Sad it came down but people should be down there with pickup trucks and chisels picking up what can be save and reused someplace else.
I believe that was a kitchen and is loaded with vintage tile, possible the original

They should tear down the projects directly behind this. Sell it to a developer and give part of the proceeds to move out of state - Florida has nicer beaches an cheap housing and the rest of the money is to lower our taxes.

If that wasnt stupid emough, it was the rest of the room of preservationists sagely nodding their agreement.

The damn community needs to swept away.

it is strange how recently a spokesman for the revitalization of this wonderful amusement mecca called for development of CI, but keeping its original character intact.Although it seems trivial, this was a historic property. I hope that Coney Island USA will closely monitor future development, so that a travesty like this does not occur again. Please keep Coney Island the unique New York place it always was!!!

As long as there are 36 story projects in coney,the area is doomed.Wait,the jobless predators need some fresh meat! commence the building!