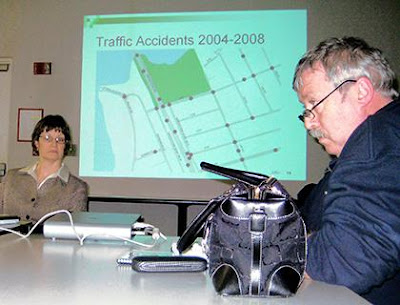 When Robert Moses built the Cross Island Parkway in the 1930s, cars taking what is now called the Third Avenue exit were able to enter the quiet neighborhood by 7th Avenue, a 70-foot-wide road Moses built to handle the anticipated traffic in the area.

That changed as the years passed. First, 7th Avenue was blocked from exiting traffic and in 1997 a divider was extended to keep highway traffic off Sixth Avenue.

As such, many residents say 3rd, 4th and 5th avenues have turned into speedways, with parents afraid to let their children play in their yards along the tree-lined streets.

So the Malba Gardens Civic, a group with dozens of members in the immediate area, sent out a poll asking area residents what should be done to address the situation, after which they proposed the city convert 4th and 5th avenues between Whitestone Expressway and 147th Street to one-way.

Maura McCarthy, the city Department of Transportation’s Queens borough commissioner, attended the meeting to respond to the civic’s proposal. She said since an October 2009 meeting when she first heard the concerns, the DOT has done several studies.

McCarthy said the city would not automatically make changes to the streets based on those statistics and that proposals to install stop signs or traffic lights are untenable as the volumes do not reach required thresholds.

Who's Gene? I thought he was Gunther Grass.
http://en.wikipedia.org/wiki/Gunther_Grass

I hate to admit it, George, but that's actually pretty funny.

Funny how speed bumps are placed in streets in front of obscure little Islamic schools in Astoria, and bike lanes placed on busy narrow commercial streets with hardly a consideration of local input.

See what happens when you live in a top-down community that dispenses with little things like civics?

Of coarse the teenagers with car keys from surrounding neighborhoods are going to race thru there and smoke weed there cause its a top notch area with out security plus no traffic lights and a few signs. No stores or buses so its pretty dead at night so people go there to hangout in there cars

My parents live right over there -- a few weeks ago, some parents put up traffic cones on 5th avenue for their kids to play -- it is an extremely narrow road and it was nearly impossible to go down with oncoming traffic. Making those streets a one-way may help a bit. Also, need to enforce the stop sign at 6th avenue and Whitestone Expressway -- people blow right through it as traffic is exiting off the Third Avenue ramp.

Malba is full of Bloomberg's people... the wealthy..

On a serious note, the kids over there with mommy and daddy's Mercedes, BMW and occasional Ferrari or Lamborghini, like to speed around the area regardless of other cars and pedestrians. There needs to be some changes made.

As for Mr Keltey's bag.. Coach from Canal Street

That is not Malba. It is Whitestone. Look it up. Malba is on the other side of the 145 Street. These are very modest homes in that area by Whitestone park that is sometimes erronously referred to as malba gardens.

Some Malba resident just got pissed off at somebody confusing tre chic upscale Malba with so-so Whitestone.

Uh...despite overbuilt tacky multi million dollar homes...Malba lost it's distinction when it couldn't afford to keep its streets private any more like Forest hills Gardens does.

How about doing some summer bus tours with a comedic Don Cheechio MC/guide pointing out the "bellisimo" sites?

Unfortunately this is very true - the old houses that were once there were MAGNIFICENT! Malba was once home to theatre people and the old silent screen stars.

Hey "Babs"...Flo Zeigfeld's and Harry Houdini's house are still there.

Other than that it's one Don Chooch (Italian slang for Donkey) trying to out do one another.

Borchetanos (the scum of Sicily) have taken it over and claiming St. Lukes for their own don (or dons).

That's nice to know about the old houses of Zeigfeld's and Houdini's!

You mention Beechhurst (and Robinswood) - I have grand memories of that nab - my aunt and uncle lived there, and they would take me swimming under what would later be the Throgs Neck Bridge.

I don't know about what you said Anonymous - everyone I know loves St. Luke's - it's the most popular church to marry in Whitestone because of its beauty - new brides just love walking down that aisle.

Enclaves will be enclaves. That's a natural progression of immigration. A total overrun of a particular ethnicity into a span of neighborhoods (a la Flushing, Bayside, Little Neck, etc ) is something completely different.

Coming from a family of immigrants, this is something alien to finding an ethnic niche in society. It more akin to finding a complete city.

"St. Luke's...it's beauty." Ditto from me. Nice open space surrounding the altar and the pastor, Msgr. Tosi, puts on a good show. [Hey, I get around.]

I live in the area in question and it is not Malba, but what has been called Malba Gardens. Modest capes with several new "McMansions"
However, the area has several young families who grew up in the neighborhood and decided not to move to Long Island and or Weschester. Anyway, for the past 13years DOT and CB7 have done nothing about the streets in question. There are over 20 kids under 16 Years with 15 under 10 Years old on one block alone.The residents have contactd every imaginable Politician, DOT head, CB7 and were ignored. When they organized and started CC'ing every email did they start getting some responses.BITTERMAN(CB7 President) was overheard saying "Who the hell do they think they are? CC'ing everybody?) Gene (Coach Bag) Kelty, is Chairman of CB7 and President of Whitestone Boosters (a Beach and Recreation Club) on Powels Cove off of 3rd avenue and 150th street. He claims his "Beach" group is against any changes in the area, and yet he sits on the Dais claiming to not have a say on the Committees decision? 7th avenue was the original exit and they screwed that up. Then from 1939 to 1997 drivers were given the option of turning onto 6th ave. In 1997, a Politicaly connected resident had the concrete divider off the exit extended so you couldn't turn onto 6th, no studies nor surveys. Also what about the impact studies that needed to be done for the HUGE McMansion project of the old CYO? 100 new ones, with a minimum of 50 more slated to go up, and no impact study can be found? Developers pay someone off?? Can Gene sit as chair of CB 7 and President of the Boosters Beach club? He lives on 22nd ave. nowhere near Malba Gardens. SMELL SOMETHING FISHY??? TIME TO START BEING HELD ACCOUNTABLE NO???