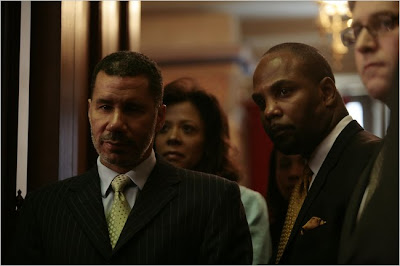 On the eve of his election kickoff, however, interviews with dozens of current and former aides, legislators and friends reveal significant criticism about Mr. Paterson’s management of the state and of his election effort.

Those interviewed describe the governor as remote from the most seasoned people around him, and increasingly reliant on people whom he feels comfortable with but who lack deep experience in government, including his former driver, David W. Johnson, and his former Albany roommate, Clemmie J. Harris Jr., who retired from the State Police on disability a decade ago and has been appointed special adviser to the governor.

Some lawmakers say that despite the state’s crippling crisis, Mr. Paterson has seldom engaged with them, beyond denouncing them. And several former state commissioners say he has virtually no involvement with those he has running major agencies, only rarely participating in policy meetings.

In extended interviews with The New York Times last week, the governor emphasized that he believed that he was the best person to lead the state, saying he was working hard and making tough decisions in a brutal economic and political climate.

But he also sought to portray himself as the victim of racist caricature — portraits driven, he suggested, by his rivals.

“This latest kind of bashing of me is a depiction of me in what is, in my opinion, a racialized, hypersexualized and more or less dissolute context,” he said, adding, “I resent this sort of, in my opinion, and I’ll be frank with you, kind of profiled way that it appears that all I’m doing is drinking, chasing women, doing drugs.”

Welcome to the real world of politics. The criticism is more because you suck than because you are a black guy. Even other black people think you suck. Time to face it.
Posted by Queens Crapper at 12:30 AM

Nobody hears about Mayor Bloombergs work ethic because the media has been well paid to avoid the topic.

The man is outside the United States three days every week.

He surrounds himself with white people he feels comfortable with even though he governs a city where 2/3 of the population are black and latino.

He was re-elected by 51% of the vote on the basis of presidential year turn outs and 90% margins in places like Forest Hills, Riverdale, Fresh Meadows and Borough Park. Every other demographic rejected him by emphatic margins.

Parents with children in public schools chose his opponent by a 2 to 1 margin, even though he spent tens of millions of $$$ purporting he impproved the schools.

2/3 of the city is black and hispanic yet they decided to be big lazy losers and not vote.

Majority rules, but voting is not mandatory. They have no one to blame but themselves.

You are very right. Maybe voting should be required to get your tax refund. That way seven percent of the population would not control everything.

Maybe real estate developers would even have to play by the rules.

Just the guy Doomberg wants. Some one who is stubborn, doesn't have access to many important city documents, does not care for self observation, and was not really elected.

Poor Paterson - I just don't believe he is the "big, lazy loser" that the media wants us to believe. From the way the man speaks and his keen sense of humor, you can tell he is an intelligent man and a good man.

I have long liked Cuomo because he goes after white collar crime with a vengence, and I will vote for him, but I don't understand why Patterson is disliked.

Maybe it is because he's blind - whether people want to believe or not or even admit it to themselves.

The criticism is more because you suck than because you are a black guy. Even other black people think you suck. Time to face it.

Patterson is a quick draw to pull out the race card when things look bad for him - there is no excuse for that unless your talking to your own kind on these actions. But people see through this stuff and want to move the discussion away from excuses and the reason to be represented is no longer racial but being effective for your constituency.

What's interesting is that he is shunned by his Harlem political base that was traditionally his Father Basil and cohorts like Rep Rangle,Mayor Dinkins and Percy Sutton (now deceased). That model was basically the old prototype and the remaining members have squeezed the life out anything they could gain because they could, is dead. See the trouble that Charlie Rangle experienced last year - he is quite the character!

Gov Patterson is in over his head, head in the sand and seems to be in the muck on every major issue that is fishy. Is it bad luck or is he being steered in the wrong direction or worse has little reasoning?

The Aqueduct deal will do him in though - although there is more to come out on this - it doesn't look good that the job was given to one of his cronies. Perhaps he just wanted to give someone a chance that he felt would've had the chance. Also, just because someone submits a bid that is lower does not mean that the city must take it - sometimes the lower bids also cut corners and sacrifice quality.

I totally agree that he is no wimp! He has been sticking up for himself and his administration almost daily now as he gets asked some pretty tough and/or insulting questions.

"What's interesting is that he is shunned by his Harlem political base that was traditionally his Father Basil and cohorts like Rep Rangle,Mayor Dinkins and Percy Sutton (now deceased). That model was basically the old prototype and the remaining members have squeezed the life out anything they could gain because they could, is dead. See the trouble that Charlie Rangle experienced last year - he is quite the character!"

It is very interesting I agree! I noticed old Sharpton didn't show his support either for Patterson.

Patterson is in a position unlike others before him - his father's friends have been supportive of him all his life - but, at this point, it hurts him politically to be supportive of them.

The "old prototype" as you say is dead or dying for all our politicians - there's also no money left to squander or steal first of all.

This will make a good movie some day!

Oh yeah, Paterson's awful. And do any of you brainiacs have any reason to think Cuomo will show principled leadership? Is there anything in his record (or his DNA) that suggests he will cut spending and reduce taxes? That he will stand up to the unions? That he will reverse NY's decline? We are doomed.