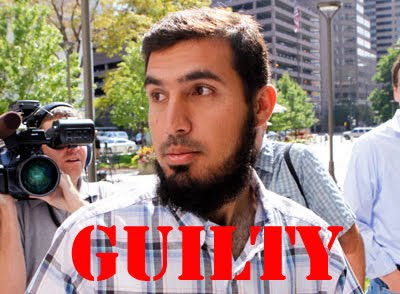 NEW YORK — A law enforcement official says an Afghan immigrant accused of a homemade-bomb plot against New York City has agreed to enter a guilty plea.

The official tells The Associated Press that Najibullah Zazi reached the plea deal after cooperating with authorities over the past few weeks. The official wasn't authorized to speak publicly about the plea deal and spoke to the AP on condition of anonymity.

The official didn't know what charge Zazi planned to plead to on Monday. Authorities say he received al-Qaida training in Pakistan.

Three other law enforcement officials tell the AP that Zazi had volunteered information to federal prosecutors about an alleged plot to attack New York City with homemade bombs.
Posted by Queens Crapper at 10:51 AM

A Middle Eastern male, in his 20's or 30's of Muslim faith has a direct link to terrorism--SHOCKING!

The Muslin faith is a very peaceful religion....unless they decide to blow your ass sky-high in the name their religion.

Funny how every terrorist is Muslim.

Wow, he's from Queens. To all our local elected officials -- How do you feel about our vibrant and diverse borough now? I'm sure there is more where he came from.

that guy that just crashed his plane into the IRS building in Texas was Muslim?

I went to Flushing High school with this guy's younger cousins.

They all live in those buildings behind Flushing high school on
35th avenue.

Hang him from the Triborough Bridge.

Wow, completely shocked. Such a surprise. Not!

Oh, I'm shocked! He was a Muslim? I thought that was a peaceful religion. My Bad!

I used to see him when I played basketball about 5-6 years ago.. or at least he looks familiar.


Saying every terrorist is Muslim is as broad and stupid statement as saying every German was a Nazi. Can we not become a community full of idiots? Thank you

Of course your right. Not every Muslim is terrorist. But it's obvious most all acts of terrorism in recent history have been done through through name of Islam. We must come to grips with this basic objective.

A Patriot who understands the issue...
http://www.youtube.com/watch?v=pgZppLvjvaE

Statistically, there is a correlation between being a terrorist and being Muslim.

This guy will get a life sentence and we will support his dumb ass as long as he lives!! If we lock up every terrorist we will bankrupt the country! DEATH TO ALL FOUND GUILTY OF TERRORISM OR CONSPIRING WITH TERRORISTS BY MILITARY TRIBUNAL!!!

A droning monologue on a serious website is always good for some comic relief.

RE: bleeding heart multi-culturists.
you should reread the news accounts of the devastation brought on the English and Spanish subway/train passengers,when the moslem saboteurs
bombed them.

never forget" both" bombings of the World Trade Center.