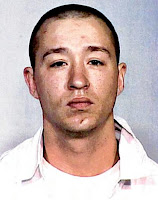 The drunk driver who mowed down a 16-year-old Middle Village teen and his friend in a stolen car a year ago has been sentenced to up to 15 years in prison for killing them, Queens District Attorney Richard Brown said.

“The defendant’s decision to get behind the wheel of a car after drinking alcohol ended with the deaths of two young people and with him going to prison for a substantial period of time,” Brown said in a statement. “Perhaps his time behind bars will allow him to reflect on what all motorists should know: Do not drink and drive. Ever.”

He should have been charged with depraved indifference murder.Hopefully he gets no "good time" and stays for the full term.

Let's hope he gets the full 15 years.

Is he an illegal alien?just wondering , usually illegals do things like this

Nah this one's just a crackhead.

Wow @ anonymous before queenscrapper comment. Not racist at all...

No actually he was trying to make the point in his own twisted way that this guy wasn't an illegal yet he killed people. Which in his mind should make us want to have more illegals in our country...

This is such a disgrace killing two people and he can be out in 7 years. I personally knew one of the boys very well and its such a shame, he was a good loving boy. RIP ROB OGLE love and miss you <3

I went to elementary school with this guy... and I am embarrased about that.

While the rest of us from P.S 128 were out getting our H.S... College and Master Degrees, this kid was still hanging out in a bark with all those other Middle Village Dirtbags... That is why I moved our first chance I got...

He deserves life in prison...two fold... plain and simple... he took life and he should pay with his own... dirtbag

He should've got probation. Everyone knows that drinking and driving in a stolen car is a lot of fun.