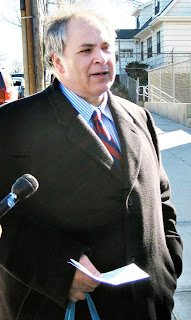 Corey Bearak, the former campaign manager for state Assemblyman David Weprin (D-Fresh Meadows), said he resigned as president of the Queens Civic Congress last week in order to spend more time on his career and with his family, but Weprin’s former opponent contends community leaders irate over his decision to send out a campaign mailing with an image of a swastika prompted him to leave.

“There were people threatening to pull their civics from the congress unless Corey resigned,” said Bob Friedrich, who ran against Weprin on the Republican line in the special election last week. “I received numerous e-mails from numerous civic leaders telling me how offended they were by the piece. There were a lot of e-mails going back and forth demanding Corey’s resignation.”

Bearak, however, said he had planned for months to resign from the Queens Civic Congress, where he had served as president for more than two years. He had recently begun his third term at the organization.

And in other news, Weprin's new Chief of Staff is Bearak, please disregard Weprin's Craigslist ad for office staffer position.

The politicians got some sexy curves out there in eastern Queens. Must be somethin in the water.

Gives you an idea on what he thought of QCC if he thew this away for ... Weprin?

Now Bearak can start his own rival organization, the QUC (Queens Uncivil Congress).

That zshlubb Corey is an great example of the shining mediocrity that the Queens political clubhouse just loves.

He's a perennial no-talent who couldn't hold a go-fer job in the Manhattan mainstream...so he opts to hide out in the farmers' borough.

Let's hope that Ms. Dolan will do a better job running QCC.

Yeah, right, I'm sure it was just a coincidence that he stepped down after swastika-gate.

This is to announce that Corey Bearak has resigned as President of the QCC and as a board member of the QCC Foundation yesterday, February 11, 2010. I spoke with Corey yesterday, and he believes it is in the best interest of the QCC and its mission that we move on.

Corey said, “I spoke with fellow civic leader Patricia Dolan earlier today to advise her that I have found that my professional obligations no longer permit me to devote the time I believe necessary to serve as President of the Queens Civic Congress. I had fully expected a return to "normal" this week but more interest in my professional services developed over the last several weeks and I really wish to explore the opportunities offered. As we both know, my original commitment was two years and I agreed last spring to try to do a third but now we just need to move the timetable up a few months.”

Cory further said, “I made clear to Pat and I committed to her that I would help her succeed in every way that I possibly can. Queens Civic Congress and all it continues to stand for means a lot to me and I remain proud of my role in building the coalition and helping to make it an influential force in the borough and at City Hall and in Albany.

I thanked Corey for all his years of service and dedication to the civic movement and the founding of the QCC. I wished him well, and said we look forward to his playing a civic role in the future.

Pat Dolan said, “I am looking forward to welcoming more than 100 Queens civic organizations
to the QCC annual luncheon on April 11 when I will discuss building on the Queens Civic Congress's extraordinary record of achievement.”

I ask all of you to help and support Pat in completing our civic year. Elections will be held in the summer to fill both the QCC and QCCF positions. The QCC and QCCF have always been and will continue to be non political and non partisan in the civic movement to better our communities.

If you have questions please free to call or e-mail me.

I am looking forward to meeting with you all at the next QCC meeting on March 15. I will let you know the location later this week.

I hope to work with you and your civic as we face some daunting challenges over the next months.

Rich Hellenbrecht and I are committted to building on QCC's incredible decade of service to Queens neighborhoods.

Please note the QCC biennial luncheon at Antun's on April 11. You will be receiving your invitation shortly.

I wonder if those luncheon invitees will march in to the tune of the Horst Wessel Lied.

1) He beat Frank Padavans candidate by 25 points.
2) Now Frank Padavan is the guy who supports the hate crimes guy (something about a swastika, i kinda am confused) with the bald head and the little mustache. Oh yeah, Freidrich.

Corey Bearak is pretty much the master of Queens politics at this point and will be delievering lots of votes against Colonel Padavan and Lietenant Freidrich.

Corey Bearak is pretty much the master of Queens politics at this point and will be delievering lots of votes against Colonel Padavan and Lietenant Freidrich.
---

Sorry buster, but like the typical leadership of this boro, you are living in 1980.

He pissed off everyone in western Queens with that millstone donnybook when he backed the wrong horse.

There is more to Queens than Bayside and Queens Village and Fresh Meadows these days.

padavan must be shitting in his pants. Freidrich has really done a wonderful job introducing him to the Democrats of the 24th assembly district. corey bearak will go down as one of the greatest strategists in this city.

padavan, tabone and the guy involved with something involving a swastika.

padavan screwed this up bad.