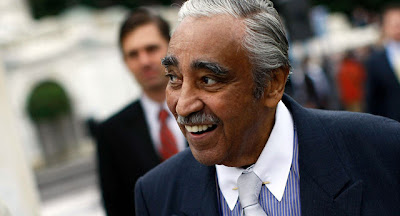 A congressional source familiar with the findings but not authorized to be quoted by name said at least four of members of the Congressional Black Caucus on the trips in 2007 and 2008 have been exonerated.

Rangel is one of the most influential members of Congress because the committee he chairs writes laws setting tax rates and oversees Medicare and Social Security benefits. The decision is certain to raise questions whether he can continue that role in an election year in which Congress must deal with several expiring tax laws.
Posted by Queens Crapper at 8:16 PM

Nobody is above the law Charlie. You've finally met your match. Now resign and go take care of your throat cancer.

The old school Dinkens, Percy Sutton, are now done with Rangle going out and Basil's Patterson's son soon to go out in disgrace.

So may the boiler room in Harlem realize the people have been had and that the fortunate new generation does not have to put up with crooks with the same color as them in office, but with qualified folks of the same color or otherwise as the residents are entitled to vote for or kick out, too.

Charlie the gig is up retire, enjoy life in the DR, already!

all are liberal/democrats. another one is allegedly going to bite the dust.....

checks and balances is the way to a more ethical government.

No woder that guy flew his plane into the irs building.rangel and other pols get away wth this but the little(middle class) guy gets screwed

This crook needed to go 10 years ago. He can retire to one of the many rent controlled apartments he and his "family" have, and his estate in the Dominican Republic.

Lock this crook up!

Tell this asshole that he's not above the law and has to pay taxes like everyone else. The fact that he still serves in Congress despite all his questionable transactions, leads me to believe he is surrounded by criminals. Dump everyone in Congress come election day. Let's get rid of the crap and start over.