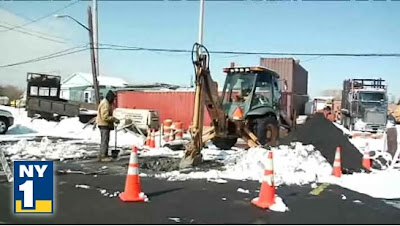 The city has completed a new step toward reducing pollution in Jamaica Bay.

According to city officials, 90 homes in Meadowmere and Warnerville will now be able to hook up to city sewage lines. It comes with the completion of a $37 million sewage and wastewater project, linking them with the city sewer system.

Previously, the waste wound up in septic systems that often failed or went directly into Jamaica Bay.

The project is part of Mayor Bloomberg's PlaNYC, which has a goal of making 90 percent of New York's waterways safe for recreation.

"We were putting our pollution, our waste, straight into Jamaica Bay, and we were, of course under court order not to do these things,” said City Councilman James Sanders.

"This has closed off and ended the discharge of some raw sewage into Jamaica Bay, here,” added Department of Environmental Protection Commissioner Cas Holloway.

Residents will now have until June 4th to arrange for a licensed plumber to hook up their houses to the new sewer system. The hook up could cost each family an estimated $5,000. Some families may be eligible for financial assistance with that cost.

The NY Times says the cost will be $10,000. The city has demapped the streets so don't be surprised if a developer comes calling looking for cheap land courtesy of the City. This may be why they finally put in sewers (like they are doing at Willets Point).
Posted by Queens Crapper at 12:20 AM

It is so boring when the media quotes directly from the mayor's self serving press releases.

Complying with court orders not to dump raw sewage has nothing to do with "Mayor Bloomberg's plaNYC".

It is obeying the law, nothing more.

At the cost of $10,000 per home, the owners will be strapped to come up with the money, particularly in this economic environment. (They'd be eligible for "financial assistance?" Dream on.) If they should fall behind in these payments, expect the city to place liens on the properties and -- voila! -- there's the cheap land for a developer, courtesy of the City.

Oh, and why were the streets demapped in the process? That does sound awfully fishy.

they should dump biggie smalls in that sewer

What does "demap the street" actually mean?