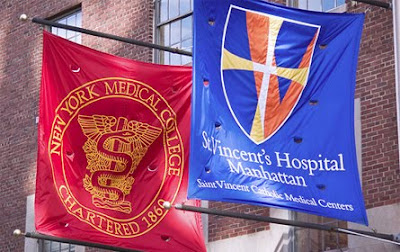 New Yorkers are used to hearing doomsday calls and cries that the closing of this or that institution will cause irreparable harm to the city, and the cynical newsreader often walks away unimpressed, sure that at the end of the day it will be no big deal. But community activists, health care experts and many local officials said, to put it bluntly, that the closing of the St. Vincent’s Hospital is a big deal, and a sign of an intensifying contraction of the already overburdened health-care apparatus in the five boroughs. This, they fear, will lead to chaos, a spike in avoidable fatalities and an inadequate response to a future disaster, natural or otherwise.

Bloomberg's absence from the discussions involving St. Vincent's future has disappointed community groups and unions (3,500 workers would lose their jobs). Stringer, along with Comptroller John Liu and Public Advocate Bill de Blasio -- all of whom are seen as likely mayoral candidates in 2013 -- won applause at the 32BJ meeting by pointing the finger at City Hall, accusing it of inaction.

With the crowd on their side, the officials pleaded for the city to do something.

What? No one knows, and if three mayoral hopefuls cannot offer an alternative to the mayor’s silence, Bloomberg probably cannot do much either. He has already proposed cuts in city services, so a city bailout at this point seems unlikely at best. The reality is that the closing of two hospitals in Queens and the fate of St. Vincent's are not isolated incidents but part of a system failure. All the city’s private hospitals could be threatened by the American notion that health care must generate revenue. That is something a Community Board chair or even a mayor who has made public health one of his top priorities cannot change.
Posted by Queens Crapper at 1:28 AM

Relax. What are you worried about? Bill Clinton can always get a stent at Columbia-Presbyterian.

Where will Bloomberg and the rest of us go when there is another 9/11 event or get seriously sick - New Jersey?

How about repealing the sanctuary city policy and welfare programs before closing hospitals?

"... a spike in avoidable fatalities..." I'm sure the mayor just sees this a little bit of retro-active abortion, a medical necessity, a way of thinning the heard.

Now that's a fil I'd love to see, but it would require Mr. Moore to lay down his anti-Republican agenda and focus on a bi-partisn attack.

What I've found plenty strange is that Catholic hospitals service illegal immigrants, the majority from Mexico, South & Central America, the Philippines, the Dominican Republic and Nepal. They have their jack pot babies in Catholic hospitals, they bring their old people there and anyone who needs serious surgery. Illegal immigrants get free medical care at St. Vincent's. I can't because I'm an American. I have to pay. Now they've destroyed another Catholic hospital in the NY area.

Where are the illegal immigrants, the Mexicans & their huge families at the community meetings to save St. Vincent's? what are they doing? First off, Mexicans could care less about carbon footprints, overpopulation and hospital closings. The stupid Anglo's will do all the work for them.

Where will all the rude, unprofessional people from the Caribbean & Pakistan work now if this hospital closes?

Thinning the "heard" makes perfect sense, under the circumstances. Be quiet.

I know several people right here in my upper east side co-op who have lost their insurance due to a combination of having lost jobs that payed enough to afford it and having to take lower paying employment just to pay the essentials -food, housing.

One of my business partners' family premiums has escalated from 14.5K/Yr to just over 17K in just three years..it is eating us all alive. They are young, healthy and no claims.

These outrageous costs serve as disincentive to work in that if you have a low enough income you can avail yourself of Health Plus-Medicaid, etc. instead of just thrashing about ever more violently just to keep your head above water.

We keep voting for these conservative pol's who only serve the interests of those major business interests and this is what we get.

Yes, but the libs are now cutting the programs that the people without insurance are driven to. So how would gov't run health care work?

"Who have lost their insurance due to a combination of having lost jobs that payed enough to afford it and having to take lower paying employment just to pay the essentials -food, housing."

won't this make the illegal aliens angry? after all, according to them they are entitled to jobs and American Citizens are not.

From the front page of the NY TIMES (Friday, February 18, "States Consider Medicaid Cuts As Use Grows):

"In Nevada, which faces a $881 million budget gap, Gov. Jim Gibbons...proposed this month to end Medicaid coverage of adult day care, eyeglasses, hearing aids and dentures, and, for a savings of $829,304, to reduce the number of diapers provided monthly to incontinent adults (to 186 from 300)."

I'm sorry Grandma. You'll just have to hold it a little bit longer.

Governments are instituted to provide for Life, Liberty, the Pursuit of Happiness, and the Control of Incontinence.