LPC making an exception this time 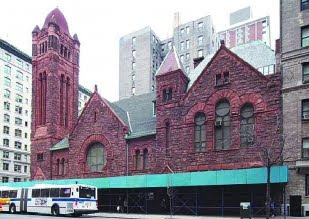 Aspersions aside, the decision to designate the church is a rare one, garnering much attention in the preservation world given that it involves landmarking a notable religious institution over the objections of its owner. The LPC typically avoids landmark designations without the owner's consent, and churches and synagogues around the city loath the concept of submitting to eternal restrictions on their properties, lest they be unable to sell off or change their buildings when finances tighten.

But West-Park has topped the wish list of preservationists for at least two decades, as they've sought to block any possible changes or demolition of the handsome, historic Romanesque Revival structure.

That's interesting. I can think of about a dozen structures in outer borough neighborhoods off the top of my head that have been on preservationists' wish lists for decades. Yet this one, on the Upper West Side of Manhattan, they designated.

So what are the criteria used by LPC to designate a building and why do they seem to keep changing?
Posted by Queens Crapper at 1:41 AM

The LPC is a creature of the preservation community that is firmly rooted in Manhattan and parts of Brooklyn.

The fact that the outer boroughs are kept ignorant of the realities (and benefits of preservation) keeps things nice and easy for them.

We need to change the landscape, from wine sipping white gloved folks who talk funny to real New York.

The first place to start is to realize that your taxes are subsidizing a population that does not reflect the true character of our city.

The second is to work to overturn the Landmarks Law in its current form and work to make a law where one rule applies to all - and designation is equal across the boroughs.

The next step is not to support any organization involved in community preseration. They are not your friends.

The final step is to organize a gress roots congress of community groups around the city ready to them on.

We will give them a dose of their own medicine.